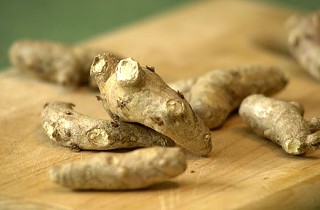 Six years ago, we were in Chiang Mai, in Northern Thailand, when our driver suggested one of his favorite restaurants for dinner: Khrua Doi Ped Ngam (Diamond Mountain Beautiful Kitchen), a restaurant specializing in "forest" or hill-tribe food, the cuisine of the indigenous ethnic groups of the Northern Thai mountains. One particularly delicious dish we ate there is a salad made of shredded white turmeric, which tastes like sweet-tart green mango and is a hard-to-find cousin of the familiar bright-yellow turmeric. That dish has lured us back every trip to Chiang Mai.

While designing a new spice garden for Madam Mam's on West Gate Boulevard, Mam requested that I try to locate white turmeric. After wading through reams of misinformation, I finally went to the definitive source: Jana Leong-Skornicková, the ginger taxonomist of the Singapore Botanic Gardens, and Puangpen Sirirugsa, expert on the 48 species of Curcuma that grow in Thailand. Both stated that "white turmeric" was indeed Curcuma mangga, a ginger relative with very light yellow/cream flesh and the taste of sweet-tart green mango. Knowing that it is also used in Indian cuisine, for chutneys, achar relishes, and curries, I spoke with professor K. Sata Sathasivan at the University of Texas, who directed me to Mathew Mathen at MGM Indian Foods (7429 Burnet Rd., 459-5353, www.mgmindianfoods.com).

Indians use C. mangga in the South and an almost identical species, C. amada, in the North; both have that distinctive mango flavor and are known in India as "mango ginger." Mathen explained that he gets it in fresh for a limited time in the summer, shipped in from Fiji and Hawaii. For a truly sublime taste treat, we suggest that you get some fresh white turmeric/mango ginger, julienne it finely, combine it with some shallot, mint, and tropical fruits of your choosing, and dress it with a sweet-sour, slightly spicy vinaigrette.