This summer, Castle Hill Cafe gets a makeover to become the Corazon of Mexican Interior fans

Tweet
print
write a letter
I was all set to go with a recap of the fifth season of Top Chef (yeah, Stephanie!) when I had a very informative conversation with Castle Hill Cafe co-owner Cathe Dailey. She revealed that she bought out business partner Mike Vilim and will close Castle Hill before the popular Down­town eatery turns 22 on July 1. Dailey, who has made her home in San Miguel de Allende, Mexi­co, for the past five years, plans to reimagine the space and reopen with a completely new concept sometime in the fall. The city permit process is in the works, and the first order of business will be to address some issues with the 110-year-old frame building that has been home for the past 50 years to one of Austin's earliest health-food stores, as well as a cutting-edge restaurant. "After all these years, the building needs some attention, and we'll be putting in a new grease trap and doing some remodeling to create a lounge area and a bar," Dailey reported. She disclosed that the new restaurant will be called Corazon (Spanish for heart) and will feature an Interior Mexican menu influenced by such chefs as (ex-husband and former Castle Hill chef) David Dailey, Rick Bayless, and others. The name evokes images of a personal cuisine that comes from the heart and warm, open hospitality – images that play well into Cathe Dailey's overall vision for the new business. "I've been collecting Mexican folk art for years now, and many of those pieces will become part of the decor at Corazon, as well," she said. Dailey's business partners in the new endeavor are chef Michael Taddeo and David Showaker, both longtime Castle Hill employees. Cathe Dailey will maintain her home in Mexico and commute to Austin monthly once the restaurant is up and running.

Founded in the summer of 1986, Castle Hill Cafe quickly outgrew its first home in a cozy space on North Lamar in the shadow of the stone hilltop castle that inspired the name. Castle Hill absolutely defined casual fine dining in late-Eighties Austin and ruled the top of the annual Chronicle Restaurant Poll for nearly a decade. The Daileys attracted a devoted core clientele who loved chef David Dailey's innovative, multifaceted fusion cuisine and greatly appreciated a pioneering, affordable wine-by-the-glass program that eventually influenced wine lists all over town. While it's true that Castle Hill was never quite the same after Dailey's retirement as chef, the restaurant had a remarkably successful life span. It leaves behind a wealth of good-food karma on which Corazon can surely build. 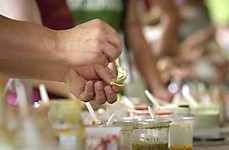