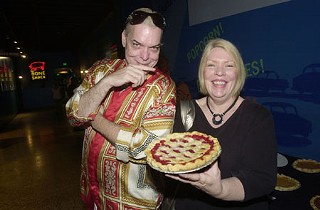 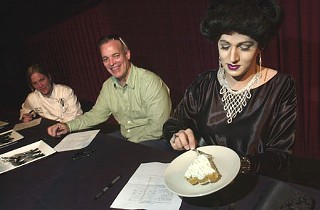 I spent Sunday evening after the hugely successful Mildred Pierce Pie Social benefit for Stephen Moser counting my blessings. Not only did we raise a respectable amount of money for a busy Sunday afternoon with plenty of event competition, but everybody had a marvelous time. The area restaurants, caterers, and bakers who contributed pies really went all out; the array of pies was absolutely gorgeous and delicious. The pie judges – chef/instructor Aimee Olson of Texas Culinary Academy, Stephen's brother Scott Moser, and our very own Joan Craw­ford, Saffire Trinity – chose the lemon meringue pie made by TCA students as their top pick, with the Almond Joy pie from Texas Pie Co. in Kyle as their second choice, and a tie for third between the cherry pie from Wink and the Kahlua Crunch from Chez Zee. The audience favorites were Lamberts' banana cream in first place, a tie between the buttermilk pie from TCA and the coconut cream from the Woodland for second, and a tie between Wink's cherry pie and the Jalapeño Dutch Apple Pie from R.O.'s Outpost BBQ for third. More than 100 people ate pie and ice cream until they couldn't hold any more and laughed out loud at the campy melodrama on the big screen. We sold whole pies in the lobby afterward and shared what was left with the resourceful and generous staff of the Alamo Drafthouse South Lamar, who saw to it that the whole show went off like clockwork. The event came full circle for me when Connie Behr­horst and her husband showed up with a picture of her brother, Eddie, and said they decided to commemorate the 10th anniversary of his death by coming to see the movie. I'm eternally grateful to all the talented pie bakers, the staff and management of the Draft­house, the delightful Moser family, and everyone who attended the event and made it a success. Thank you all... After Kate Thorn­berry's recent piece on the innovative cooks at Gluten Free Kneads, the ladies e-mailed to inform us that their gluten-free pizza and cookie doughs are also available at Cissi's Market (1400 S. Congress, 225-0521, www.cissismarket.com)... The owners of the very popular Daily Juice outlets (1625 Barton Springs Rd., 480-9501; 2307 Lake Austin Blvd., 628-0782; www.dailyjuice.org) recently celebrated five years of providing fresh, healthy juices to Austinites. They also announced an Earth Day commitment to discontinue the sale of water in plastic bottles, even though that provides reliable revenue for their business. From now on, Daily Juice will sell water in recyclable glass bottles at both locations and at their third outlet coming to the Hyde Park neighborhood late this summer.