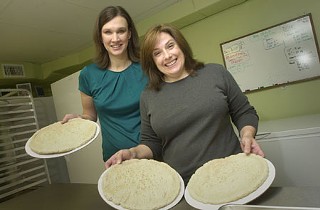 Celiac disease, also known as gluten-intolerance, is one of the most common chronic health disorders in the Western world.

As more Americans are finding out they're intolerant of gluten – a very small protein found in wheat, barley, and rye – the demand for gluten-free foods is increasing exponentially.

Gluten Free Kneads, headed by Georgia Hutton and Erika Leakey, is a small Austin company that has stepped into the gap. They specialize in frozen gluten-free doughs that the consumer can bake at home, and their newest product is a frozen, New York-style pizza dough. Each package contains two 10-inch rounds, and the dough is specially formulated not only to be gluten-free but to bake to the proper consistency in a conventional home oven.

These little pizza doughs are easy to use, easy to store, quick to make, and virtually indistinguishable from conventional, wheat-based pizza dough. The texture is crisp on the bottom and chewy and breadlike underneath the toppings. The outer crust is somewhat crisper and more crackerlike than a restaurant pizza; still, my pizza-connoisseur husband absolutely loved this crust and had no perception it was gluten-free. Other pizza connoisseurs agree: Local restaurants the Brick Oven Restaurant in South Austin and the Grove Wine Bar have recently added Gluten Free Kneads pizza dough to their menus.

Gluten Free Kneads also makes seven kinds of frozen, ready-to-use cookie and brownie dough, including such favorites as chocolate-pecan chip, snickerdoodle, peanut butter, and Triple Chocolate Blast. Recently the company was approached by Disney World Florida to make an entirely allergen-free cookie for the amusement park. After much experimentation, Gluten Free Kneads formulated a cookie that is not only gluten-free but also contains no casein, soy, egg, nuts, corn, or potato. They landed the Disney World contract and are also making these cookies available to the general public. This completely allergen-free cookie dough is available in three flavors: lemon, cinnamon, and cocoa. (All cookie doughs: $12.50 a package.)