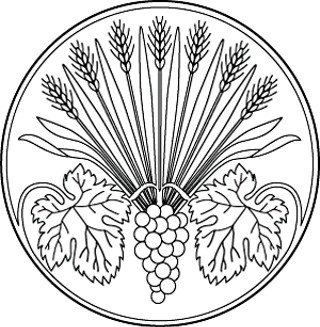 "LDEI is an international organization of women leaders who create a supportive culture in their communities to achieve excellence in the food, beverage and hospitality professions. To do this LDEI members: share knowledge, support members, [and] provide leadership, educational opportunities and philanthropic events for the larger community."

So, what does a dynamic international organization of women food professionals have to do with a 19th century French chef? Therein lies a tale ...

Auguste Escoffier (1846-1935) was one of the first international stars of modern cooking. Apprenticed in a kitchen in Nice at 13 and consumed with ambition to become the best, he moved steadily upward in his assigned trade to become "the chef of kings, and the king of chefs." Escoffier worked in partnership with hotelier César Ritz, and his illustrious culinary career included revising the previous chaotic system into the efficient kitchen brigade that remains in place today. He developed and documented thousands of recipes for Le Guide Culinaire (1903, the bible for professional cooks) and Ma Cuisine (1934, for home cooks). His clientele included heads of state and popular cultural figures such as England's Edward VII, Kaiser Wilhelm II, and Sarah Bernhardt. Less well-known were his concerns for kitchen employees' welfare and his lifelong humanist activities.

In 1936, a group of epicures, many of them protégés of Escoffier, gathered in New York to form Les Amis d'Escoffier Society, a fraternity of dedicated (male only) gastronomes, composed of chefs, hotel executives, and restaurateurs. In 1959, a women's adjunct, Les Dames des Amis d'Escoffier, began in Boston – it was known for spectacular dinners and fundraising events to benefit food and wine charities. There was, however, no organization for professional women in the industry.

In the early 1970s, Carol Brock, a food writer and editor at the New York Daily News, received a charter for a new, autonomous "ladies' chapter" for professional women only. In 1973, 50 women culinarians created Les Dames d'Escoffier New York, dedicated to raising the image and presence of women in food, wine, and hospitality and to helping women train and qualify as equals to men in the industry. Four additional chapters were formed: Washington, D.C. (1981); Chicago (1982); and Dallas and Philadelphia (1984).

Over the years, LDEI's reputation has expanded along with its size and scope. Now, with more than 1,200 members, there are 25 chapters in the U.S., Canada, and Australia (including Dallas, Houston, San Antonio, and Austin). Membership is by invitation, and half of each chapter's annual dues goes to the national organization. Each chapter conducts fundraising projects and awards scholarships that amount collectively to more than $2 million. Many scholarship recipients have gone on to illustrious careers, including Amanda Hesser of The New York Times and Sara Moulton of the Food Network. During the past two years, LDEI has launched the Green Tables initiative, where each chapter collaborates with a garden or farm-to-table project in their community.

"Les Dames d'Escoffier is a leadership culinary organization composed of women who have not only achieved success in their profession, but who contribute significantly to their communities. ... [It] has followed its mission to elevate the profession through mentoring members and helping worthy students succeed in their culinary careers. I am very proud to be a member." – Julia Child (2001)