Sisters Are Doing It for Themselves ... and Austin, Too!

The Austin chapter of Les Dames D'Escoffier is fulling its mission to create a supportive culture in its community to achieve excellence in food, beverage, and hospitality professions 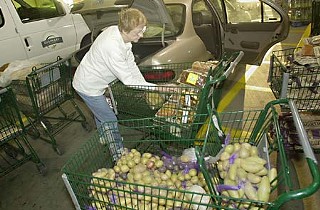 This week, the Texas Hill Country Wine & Food Festival showcases the best culinary and viticulture offerings of this region plus the talents of visiting celebrity chefs and vintners from around the world. Members of the Austin chapter of the culinary service organization Les Dames d'Escoffier International (see "A Brief History") are involved in every aspect of the festival. For example, the popular annual event was founded by Fall Creek Vineyards co-owner Susan Auler, matriarch of the modern Texas wine industry, who joined Les Dames in Dallas in the early 1980s and is now also affiliated with the local chapter. Local restaurant publicist Paula Biehler handles public relations for the event, caterer Quincy Adams Erickson is a former longtime board member, and former festival director Dawn Orsak stayed on this season as a part-time office employee. Chefs Terry Wilson (Aquarelle), Alma Alcocer-Thomas (Jeffrey's), and Aimee Olson (Texas Culinary Academy) are cooking for various components of the fest, and winery co-owners Karen Johnson (Alamosa Wine Cellars) and Kathy Gilstrap (Texas Hills Vineyard) are pouring their wines. Austin caterers and cooking teachers Beth Pav and Gina Burchenal are escorting VIP chefs and will coordinate and stage-manage cooking demonstrations at the Sunday Fair. It stands to reason that an organization dedicated to culinary service would be involved with such a glamorous and upscale event as the annual Hill Country celebration. But the festival is only one of many community events where the busy and talented women of Les Dames are lending a hand.

The fast-growing Aus­tin chapter of Les Dames d'Escoffier was founded in October 2003 by Joan Wood and Johanna Brown, chapter members from San Antonio who had relocated to Austin. The two founders recruited a diverse but close-knit group of women that includes restaurant and private chefs, caterers, public-relations women, restaurateurs, recipe developers, artisan food producers, food and wine writers, cookbook authors, chef instructors, and winery owners. Since the beginning, this modern culinary sorority has taken on personal and community projects with equal gusto and dedication. "It's a remarkable sisterhood," Brown said over pizza at Stortini recently. "The networking makes it possible for us to connect with members in other chapters, support each other's projects, and recommend each other for jobs – that kind of thing. We're all really busy with careers and family, but Les Dames is so important to us, somehow we manage to make time to be involved." The value of networking opportunities can't be underestimated. "Years ago when we first started promoting Fall Creek wines in New York City, it helped that instead of just making cold calls, I was able to contact Les Dames members there who were active in the food press. Carol Brock was very helpful," recalls Susan Auler. Central Market foodie Jane King corresponded with Les Dames members in Australia via e-mail before a vacation Down Under and found their help to be invaluable. "They made sure we knew all about the big Tasting Australia event in Adelaide, showed us around, really made us feel right at home." Networking among local members delivers positive results, as well. 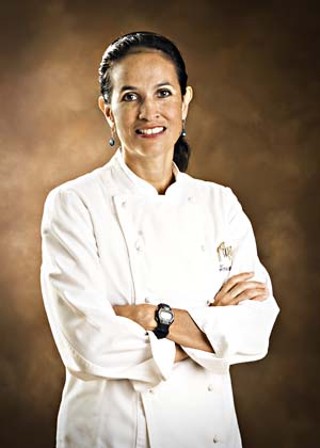 In fact, the story of Les Dames' involvement with a local meal program for the homeless seems to reinforce the truth to the old adage,­ "If you want something done, ask a busy woman." Personal chef Pamela Nevarez explains: "We were discussing possible service projects for the group at one of the early board meetings, and I told them about a pamphlet I'd seen about Food Runners, a very successful San Francisco program that distributes excess food from grocery stores, restaurants, hotels, and caterers to programs that feed the homeless. I was hoping we could do something like that here." That's where Whole Foods Market public-relations team member Cathy Cochran-Lewis came into the picture. Every weekday at Whole Foods, perfectly edible but day-old baked goods and cosmetically unsalable produce are culled from the shelves and picked up by local agencies that feed the homeless. "I noticed that on the weekends, most of the culled food was going into the compost simply because there was no one to transport it to an agency that could use it," recalls Cochran-Lewis. "Pamela and I discussed it, and the more we talked about it, the more we realized we can do this; we can make something happen!" Every Saturday morning since then, rain or shine, two Les Dames members show up at the loading dock of the Whole Foods flagship store at 7:30am to pick up the culled produce and baked goods. One woman makes a delivery to the Caritas kitchen Downtown, and another heads to the campus-area University United Methodist Church.

The Saturday Outreach Homeless Meal was a well-established UUMC program operated by church volunteers long before Les Dames became involved. Between 80 and 120 people a week were served a menu that usually consisted of peanut-butter-and-jelly or lunch-meat sandwiches on white bread plus a banana. The breads, pastries, fresh fruit, and vegetables Les Dames provided from Whole Foods enhanced the menu and freed up budget funds to purchase better food. Before long, Saturday Outreach volunteers were offering pastries and coffee to the folks waiting in line in the alley, followed by a hot meal complemented by fresh fruit. "This program might have gone under due to budget cuts if Les Dames hadn't come along when they did. Because of them, we can serve better food to as many as 180 people every week. The value of their effort cannot be stressed enough," says regular UUMC volunteer Pam Klinger. Saturday Outreach also serves Thanksgiving and Christmas dinners to the homeless, and the entire Les Dames chapter has embraced those meals, as well. The church provides hams and turkeys. Les Dames members and their families complete the meal with side dishes, breads, desserts, and personal service. "My granddaughter and her friends served desserts at Thanksgiving and can't wait to do it again in the fall," reports Auler. The diners are very appreciative of the exceptional food and warm fellowship. Many Les Dames members relate stories similar to Auler's that reveal making a difference at Saturday Outreach is a soul-satisfying experience for all involved.

In keeping with the international organization's Green Tables initiative, Austin Les Dames are participating in projects that help create a connection between the farm and the table. Several members will be involved with the Sustainable Food Center's Farm to Plate event at the Triangle in May. The chapter also invests time, energy, and grant money in the Horticulture and Food Safety class at Garza Independence High School in East Austin. Garza instructor Martha Cason explains that the multidisciplinary class uses gardening to teach not only horticulture but also nutrition, cooking, marketing, and entrepreneurship. This year, Les Dames awarded the Garza class a $2,500 grant to cover the cost of building more raised beds so they could increase both the amount of herbs they sell at the weekly Austin Farmers' Market at the Triangle and the amount of vegetables they deliver to the school cafeteria. Members also purchased tabletop propane burners and cookware for the classroom so students could learn how to cook the harvest from their garden. Les Dames members have been known to help out in the garden, and they also show up once a month to provide cooking instruction or talks on nutrition. "The Les Dames volunteers provide connectivity; they help us complete the circle from planting and nurturing the garden, to harvesting the crops, right through to selling or cooking them. They talk about possible culinary careers, demonstrate how people can give back to the community while modeling positive, supportive adult behavior, something our students really appreciate," says Cason.

In addition to projects like Saturday Outreach and the Garza program, Les Dames hold an annual fall benefit on the campus of the Texas Culinary Academy to raise scholarship funds. Current female students in the culinary programs at Austin Community College, the Culinary Academy of Austin, and the Texas Culinary Academy can pick up applications for Les Dames scholarships at their respective campuses. Prospective scholarship candidates must be enrolled in a certificate or associate-degree program in culinary arts, baking and pastry, or hospitality and restaurant management. They must have completed at least 20 hours and maintain a GPA of 3.5 or higher. The Les Dames scholarship committee reviews applications and makes recommendations to the board of directors who finalize the awards. The Austin chapter awards four culinary scholarships a year, each in the amount of $1,000. Applications for consideration for this year's scholarships must be postmarked by April 18.

When they aren't raising scholarship money, helping stage upscale events, or volunteering in the community, Les Dames members also find the time to celebrate one another's milestones and provide thoughtful care in difficult times. The chapter gathered late last month at III Forks to fete Austin American-Statesman Food Editor Kitty Crider, a Les Dames member who retired after 28 years of service at the local daily. We're told a grand time was had by all. When local cookbook author and Southwestern herb expert Lucinda Hutson was recovering from hip-replacement surgery two years ago, her Les Dames sisters kept meals coming to the house for several weeks until she was back on her feet. Whether members have experienced a death in the family, are recovering from major surgery, or are battling cancer, the Les Dames sisterhood is there with an outpouring of comfort, support, and great food. Busy women, indeed.