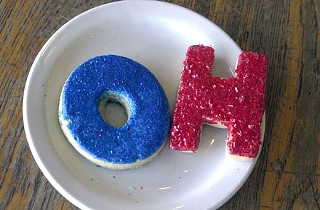 Last Friday night, taco fans celebrated the opening of the newest Torchy's Tacos outlet (2809 S. First, 444-0300), located in the refurbished former home of the legendary Virginia's Cafe. This is the second new Torchy's, but this one has inside seating, and though the building is on the small side, there are some picnic tables outside for al fresco dining. Torchy's chef/owner Michael Rypka and his staff served up "damn good tacos" to the appreciative crowd along with their newest signature item, deep-fried chocolate-chip cookies, called Little Nookies... In the spirit of primary season, Quack's 43rd Street Bakery (411 E. 43rd, 453-3399) owner Art Silver is running a nonbinding contest between the Demo­crat­ic presidential hopefuls, Sens. Hillary Clinton and Barack Obama. The bakery is selling decorated "H" and "O" shortbread cookies for $1.50 each, and we're told the Obama cookies are just flying out the door. General manager Duke Cor­rea reports the cookie poll is so popular, bakers are having trouble keeping up with the demand, but they hope to keep the contest going until the primary on March 4. Be sure to drop by and vote... In recent weeks both Boggy Creek Farm (3414 Lyons Rd., 926-4650) and Whole Foods Markets (all locations) have discontinued the use of plastic grocery bags. Now Central Mar­ket (all locations) is weighing in on the bag situation. They will continue to offer customers the option of bagging groceries in either plastic bags or paper bags made from 40% postconsumer waste, but the stores are also selling sturdy, reusable grocery bags and placing collection bins near store entrances for customers who want to recycle any and all types of plastic bags. By the way, both Central Market stores will be commemorating Texas Independence Day this weekend with in-store demos of Texas artisan food products and live music... I'm still just incredulous that Central Market let her get away, but former CM Cooking School Director Kelly Ann Har­grove is leaving Austin to take a bite out of the Big Apple. Her good friends in the local chapter of Les Dames d'Escoffier threw a potluck send-off party for Hargrove earlier this week at the wine bar at Aquarelle (606 Rio Grande, 479-8117). Knowing Hargrove, I'm sure she'll take New York by storm – you go, girl!... Well, move over Seattle, here is a piece of news that would seem to indicate Austin is right out there on the cutting edge when it comes to new coffee-shop concepts – a first of its kind martial-arts-themed coffee shop has just opened. At Kick Butt Cof­fee (5775 Airport #725, 633-8306) the baristas are decked out in Mandarin-collared kung-fu uniform tops, and both the decor and the names of specialty drinks take their inspiration from martial arts, as well. They are open daily from 7am to 11pm and offer free Wi-Fi connectivity. This new concept is the brainchild of local martial-arts instructor Thomas Gohring, owner of Master Gohring's Tai Chi & Kung Fu Academy (6611 Airport). Long-range plans for the business include regular Kick Butt comedy and music events and the expansion to six or more stores within the next five years. 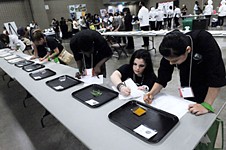 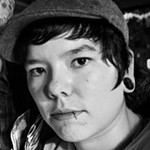