This West Lake eatery proves that you can go home again 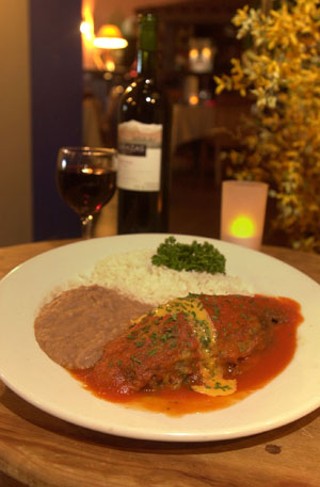 
Our crowd of AusTex ne'er-do-wells had a short list of Mexican restaurants that we frequented back in the early to mid-Eighties, and Las Palomas, or "the Doves" as we preferred to call it, occupied a place near the top. Our favorite honky-tonk, Soap Creek Saloon, had been run out of Rollingwood in 1979, four years before Las Palomas opened in 1983. Naturally, there was a little hipster resentment toward the city of West Lake Hills in general because of that, but we put all of that aside when the Mexican-food cravings kicked in. Most of Las Palomas' dishes we loved back then are still being served today, 25 years later. Las Palomas' menu draws from the interior of Mexico, based on family recipes from Veracruz, the Yucatán, Puebla, and Oaxaca.

They've gained an extra dining room since those early days, lined with mirrors on the far end to add the illusion of even more space. The wall colors are in the Mexican palette: warm, dark tones with subdued lighting and plants to add a tropical feel. There's a small outdoor patio for al fresco dining or drinks when the weather allows and a party room for private functions. The staff, dressed in all black, provides seamless service.

After a period of absence, we decided to revisit the Doves for a refresher course. Our first trip started with a steaming bowl of posole ($4.95), a rich broth filled with large chunks of tender chicken, white hominy, onion, and garlic, topped with shredded lettuce and sliced radish. For a little extra heat, we opted to add some pico de gallo. It was a nice bowl and very filling. Next was an old fave, Enchiladas Tres Marías ($8.95), three enchiladas stuffed with moist, shredded chicken, topped with three sauces and white Mexican cheese. Sauce one is Las Palomas' excellent mole: rich, nutty, and spicy with a subtle chocolate finish. Sauce two is their ranchera: a mildly spicy blend of tomato, onion, and jalapeño. Sauce three is verde: tart tomatillo with onion and cilantro.

We subbed the refried beans with the frijol­es a la charra ($1.95 extra), a rich, smoky broth; tender pintos; thick slices of bacon; onion; and jalapeño slices – a superb version. Las Palomas' rice is outstanding, made by steaming it over cooking pots of chickens, so the grains absorb flavor and stay light and separate. We also had Camarón al Chipotle ($13.95), six butterflied shrimp broiled with garlic butter, herbs, and a coating of chipotle chile paste, perfect with a squeeze of lime. This is served with a dinner salad and a side of the rice.

Visit two led off with empanadas ($6.95 for two), served with a small salad and a minimound of guacamole. We had one filled with tender and savory shredded pork and one with the exceptional rich and spicy picadillo ground beef. The pastry is more sopapilla than pie, but the total package is delicious. A cup of corn soup ($3.50) was okay, loaded with pureed creamy corn with onion in a chicken and cream stock. We would have preferred the corn had been sieved to remove the exteriors of the kernels to make it less chunky, and some strips of rajas poblano would have set it off perfectly. A cup of tortilla soup ($3.50) was fine but didn't excite: a tomatoey chicken broth with chicken bits, tortilla whiskers, and mozzarella.

Cochinita Pibil ($11.95) is succulent: a nice mound of shredded pork, kissed with citrus, annatto, and chiles, topped with red onions marinated in vinaigrette. Had those chiles been habaneros, it would have taken me straight back to the Yucatán. It is enough to fill three tortillas and is paired with the rice and refried beans. Puntas a la Mexi­cana ($11.95) comes on a cast-iron platter: a mélange of beef tenderloin tips, chopped tomato, onion, jalapeño, and herbs, especially good when the sauce components char on the sizzling platter. With refrieds and rice and enough puntas to fill three tortillas, you have a plateful.

We also sampled the beef fajitas ($10.95), strips of marinated skirt steak with onion and peppers sizzling on cast iron. There's an element to the marinade that we couldn't put our finger on, and the meat might have been more tender. It comes with the requisite rice and refrieds and a side dish of shredded cheese and lettuce, sour cream, guacamole, and pico de gallo.

Tostados are served warm in baskets and are the perfect thickness: not too chunky and not too thin. The salsa is medium spicy, with chunks of onion and chile and a nice lime tartness on the finish. We sampled the house margarita ($5.50) on the rocks and the Mexican martini ($8.95) and found them tasty and effective. One small caveat: The martini shakers they use have a tendency to dribble and miss the glass, so pour with caution. Happy hour runs 5-6pm, Tuesday through Friday, with margarita and beer specials and discounts on appetizers.

We are teased by several menu items poised for tasting on return trips, including the Pescado a la Veracruzana and Mojo de Ajo, the carne asada done with beef tenderloin and their spicy version of Steak Chimichurri. On the lunch menu we have our eyes trained on future plates of the fish tacos, spinach enchiladas, and the chilaquiles.

For a restaurant to remain on its game for 25 years is definitely the exception to the rule, especially in West Lake, where for some reason, loyalty to the local restaurateurs seems to be historically lacking. The denizens of the neighborhood have definitely embraced the Doves. Las Palomas has remained true to form, and, with apologies to Thomas Wolfe, you can go home again.