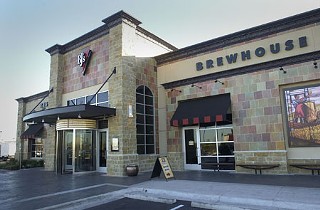 
I'll confess, I went to BJ's with low expectations. In fact, I almost didn't go at all – after all, the world doesn't really need a review of the latest corporate megachain to hit Austin. But this one had a difference: It has its own beer. That piqued my curiosity. Still, having your own doesn't necessarily mean it will be good. And Austin is a beer town – if you're going to brew here, you'd better bring your "A" game. (And actually, BJ's doesn't brew here – because they don't want to build an individual brewery for each Texas restaurant, they contract with Houston's Saint Arnold Brewing Co. to avoid legal requirements that would force them to hire a distributor to ship from one restaurant to another.)

Despite the misgivings, color me impressed. This California-based company isn't slouching into this market. I went with three friends, beer snobs all, and we tried everything except their pilsner, with opinions ranging from "not bad" to "very good." On the low end was the Harvest Hefeweizen. Now, I'm not a big fan of this style of wheat beer generally, but my tablemates who had an appreciation for it thought the flavor was too light and couldn't muster up anything more enthusiastic than "not the best I've ever had." Of course, we also noted that January might not be the best time to review a hefe, a variety best appreciated ice cold on a sweaty summer day. More appropriate to the weather was the PM Porter, a pitch-black ale that owes a similarity to Guinness Stout due to its reliance on nitrogen instead of carbon dioxide for its fizz. It had a deep, roasted flavor that lingered on the tongue well after drinking. Also pleasant enough was the Nutty Brewnette, an Ameri­can-style brown ale whose chocolate malts dominated the palate.

Stepping up in quality, we were pleasantly surprised by BJ's Brewhouse Blonde, a crisp, pale beer in the style of a German Kölsch. Now, in a city that boasts hometown favorites like Fireman's #4 and Shiner Kölsch, a blond ale has a high hurdle to jump. BJ's variety doesn't quite clear it, but it comes close with a recipe that isn't shy on flavor – don't let the color fool you into thinking this will be a watery light beer. The Tatonka Stout is also no wallflower – an imperial stout, this goes well beyond what you might expect if you're a Guin­ness loyalist. At 8.5% alcohol, it's not for the faint of heart, and with a heavy-hitting combination of chocolate and black malts, roasted barley oats, brown sugar, and molasses, it's not for the faint of taste bud, either. The bold mix of flavors initially struck me as a bit strange, but I quickly developed a liking for it.

The two biggest stars of the night, however, were the Jeremiah Red Irish Style Ale and the Pir­an­ha Pale Ale. The hopheads in my crew were definitely taken with the latter, with a strong dose of hops that punches you right in the mouth with a lovely bitterness, and we all fell in love with the Jeremiah's bright, clean taste and full body that settled into an enjoyable fruit note as it washed across the tongue.

We concentrated our reviewing efforts on the brew, but BJ's food menu was solid enough to satisfy, if not inspiring. From predictable chain fare such as baby-back ribs, sandwiches, burgers, and deep-dish pizza, we selected a BJ's Favorite pizza, a stomach-warming mix of meatballs, pepperoni, sausage, green peppers, black olives, mushrooms, and tomatoes, and we were particularly pleased with the appetizer sampler – especially the creamy spinach & artichoke dip, the tangy Santa Fe spring rolls, and the very flavorful avocado egg rolls.

In a corner of town (Southwest) that is woefully deficient in places catering to beer connoisseurs, BJ's more than competently fills a void and demands that anti-chain prejudices be set aside.