Stuff Your Stockings With Fun 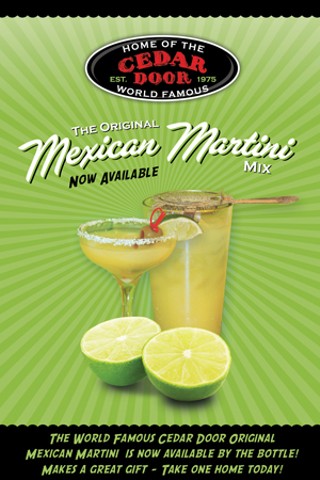 I live 30 miles from the Cedar Door, so it takes some dedication to get there. But I do, mainly to get my Mexican martini fix. Something very satisfying triggers in my brain when I see that icy shaker making its way to my table. And though I'm the biggest snob in the world about margaritas (the perfect version being 3 parts silver tequila-to-2 parts triple sec-to-1 part lime), somehow, when they call it a Mexican martini, I don't mind the simple syrup and orange juice. Those nice people at the Cedar Door have started selling their Mexican martini mix ($5.99 at Spec's or about 38 cents a dose). There are a couple of differences from the original Cedar Door recipe, the main one being they use citric acid and natural citrus oils instead of fresh juices. For the occasional drinker, this is a plus, because the shelf life will be much longer. Taste? Well, it comes darn close, so close that now I'm wondering where I can find those shakers.

Everyone needs a good wine opener. I've tried them all, from Rabbits to Rogar brass monsters, from French Laguioles to Screwpulls, from winged pieces of art to Austin Powers-styled pumps. For my money, the only one worth having is the Pulltap's waiter's corkscrew. This is design on the skinny branches of genius. It has a serrated cap-cutter that won't dull. The screw is Teflon-coated, and even after opening hundreds of bottles of wine, the Teflon on mine hasn't worn off. But the most important invention is the two-part hinged lever that allows you to pull the cork straight out, which means no more broken corks. OK, the Rabbit does that, too, but you can fit the Pulltap's unobtrusively in your pocket. Try that with a Rabbit. And there is the little matter of cost. Those other openers range up to $200; the Pulltap's runs about $10. I have about a dozen of them: one in the picnic basket, one in my backpack, one in the luggage, and one in every room in the house in which I'm likely to open a bottle of wine. It is the single most used wine implement I own. Don't miss it.

The second-most-used wine device in the Marshall house is the Drop Stop Wine Pourer, a flexible metallic Mylar disc that curls up, so you can insert it into a bottle. There's enough bounce to it so that it stays put. But the physics behind it are so simple, you wonder why no one thought of it before. Since the edge of the disc is so thin (thinner than a dollar bill), the wine has nothing to catch on, so no drips. None. I used to have red wine stains all over the house because of drippy bottles. The Drop Stop stops them dead in their tracks. These things are ridiculously inexpensive, usually about $1-2 each. In Europe, several wine companies are printing their business cards on a Drop Stop, because they know wine lovers will hold on to them forever. Until that happens here, buy yourself a few. Once you try it, you'll never pour a bottle of red wine without one.

My last stocking stuffer is for the adventurous drinker: a gift certificate. Normally, just giving a gift certificate means, "I couldn't think of anything to get for you." To make it a little more creative, put a note in the envelope stipulating it is only for something that will be an absolutely new experience. Bourbon drinkers might try a Cognac; Chardonnay drinkers might try a Cortese. Anything that makes them think outside the box. With some good guidance at the stores, they'll probably discover something wonderful.