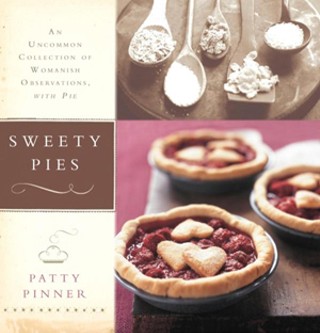 Sweety Pies: An Uncommon Collection of Womanish Observations, With Pie


There is nothing else on earth like the pink glaze of a strawberry-rhubarb pie clinging to the last shard of flaky, fluted crust or the piles of breathtaking meringue crowning a tart key-lime pie. A home-baked pie is one of the things that actually makes people happy, yet eating one is an experience that grows increasingly rare for most Americans. The art of pie-baking is in danger of being lost; how many times have you heard someone lament that they "just can't make piecrust"?

In the small, Mayberry-like town of Saginaw, Mich., before the Second World War, pie-baking was considered an essential womanly art: one of the many strings to a woman's bow. The pillbox-hat-wearing, churchgoing, soul-food-cooking ladies of Patty Pinner's childhood took their pie-making very seriously, and Ruth Pinner made sure that her daughter mastered the art. She passed along to her daughter not only her own skills and recipes but also the best recipes of her friends and relations, which she had diligently collected over the years.

In this captivating book, Pinner remembers these mothers, aunts, neighbor-ladies, and friends in colorful vignettes and gives each woman's premier pie recipe. Along with each recipe are truly inspiring photos of each pie: No cookbook I have ever come across has managed to catalog so many varieties. Butter­milk pie, fresh raspberry pie, peanut-butter-cream pie, rice pie, pumpkin-coconut pie, tangerine meringue pie, and 64 other kinds, each one a particular woman's tour de force.

The recipes are clear, simple, and easy to use. Pinner also gives her mother's excellent, extraordinarily rich and flaky piecrust recipe, as well as useful instructions on the shaping and decorating of pies. If your life suffers from inadequate amounts of home-baked pie, this book is the remedy.