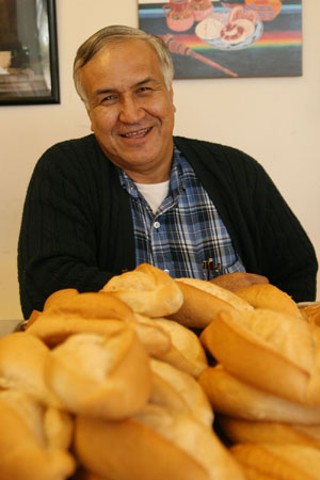 If I was really lucky when staying up at my grandparents' house, Aunt Ruby would drop by with some of her yeasty, sweet, and buttery cinnamon rolls, which were a modification of her dinner rolls. Any event of the House family today must be accompanied by a large tray of Ruby Keeling's heavenly cinnamon rolls. Like most of the recipes from way back then, Ruby's recipe isn't quite as detailed as we expect a recipe to be today. – Mick Vann

Flour: "enough to make the dough stiff enough to handle. Do not knead as much as when making bread. It should be stiffer than a biscuit dough."

Combine the water, sugar, and yeast, and mix well. Cover the bowl with a dishcloth, and let it sit until it activates. In a large bowl, mix together the yeast starter, oil, salt, eggs, and flour. Work the dough into a big ball, and place it into a greased bowl (a 1½-gallon milk crock is good). Lightly oil the top of the dough, cover, and put in a warm place to rise twice its size. Punch down with your hands (it's okay if it flops over), and let rise a second time. Pinch off the amount of dough you want for one meal's worth of dinner rolls, work it down a little, and then pinch off rolls. Place in a greased pan, let rise in a warm place, and bake at 350 degrees.

Note: The rolls will have a better flavor if the dough is made two or three days in advance; the dough will keep in the refrigerator for at least a week.

Divide dough into four balls. Roll each ball into a rectangle on a floured surface. Brush the surface liberally with butter, sprinkle on sugar and cinnamon, and roll up like a jelly roll and slice into rolls about ½- to ¾-inch thick. Pinch or roll the edges (so that they don't stick), and place into a greased pan. Bake at 350 degrees. While still warm, ice them with an icing made of powdered sugar, butter, vanilla, and enough milk to make an icing.