The Staff of Life 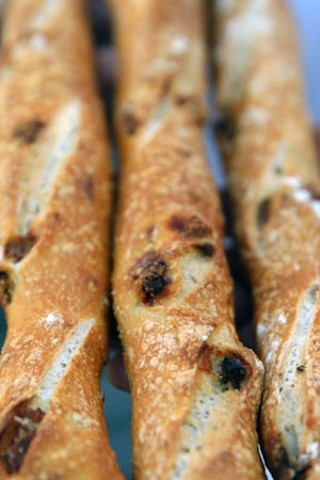 More than a loaf of bread, Central Market's prosciutto-peppercorn ficelle is an addiction. Introduced to the CM bakery around 1996 by French master baker Edouard Damez, it has remained one of their most popular breads, and for good reason. I hardly ever go there and leave without one of these treats. Be warned that this is not the kind of bread one can use to make sandwiches or toast for breakfast but more like a rustic snack. It weighs only 8 ounces and is thinner and slightly shorter than an average baguette, resembling an oversized bread stick (after all, ficelle means "string" in French.) According to CM baker Paul Dough­erty, its divine golden, crispy crust and chewy texture are achieved by baking it very fast in a hearth oven. This is actually their only bread that contains meat: Studded with tiny cubes of prosciutto and generously dotted with coarse cracked black peppercorns, every bite is an explosion of spicy, nutty, salty bliss.

It's all I can do to make the short drive home and not eat the whole thing in the car, especially if I make the crucial mistake of going to Central Market hungry. But if there's any left when I get home, I like to cut it in bite-size, diagonal slices and serve it along with cheeses, cured meats, olives, roasted tomatoes, and pickled veggies as a light snacky supper. It is also fantastic as accompaniment to a green salad or a cup of a creamy vegetable soup. – Claudia Alarcón