Beaucoup pastry doughings; plus, sad news from the Brentwood Tavern and P&K Grocery 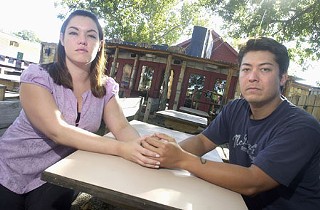 How's this for a case of pastry-basket turnover? Well-known San Antonio pastry chef Mark Chapman came to Austin from La Mansión del Rio a couple of years back to fill the position as executive pastry chef at the Driskill Hotel. He left that job earlier this fall to pursue a personal project of his own. We've just found out the Driskill has tapped former Four Seasons Hotel Austin pastry chef Tony Sansalone to fill Chapman's spot there. Sansalone left the local Four Seasons property three years ago to start his own custom wedding cake business, but the Driskill post was too attractive to pass up. In 2004, Sansalone was replaced at the Four Seasons by Judy Marts, a well-traveled Four Seasons pastry chef who actually began her hotel career in Austin in the early Nineties and transferred back when Sansalone moved on. Marts left the Austin Four Seasons in August to pursue her dream of small-business ownership, and her new spot, the Cookie Jar (13710 RR 12), should be open in Wimberley sometime before Thanksgiving. The Four Seasons recently announced they've hired Naomi Gallego as executive pastry chef to design and oversee the production of breads, pastries, and desserts for the hotel and especially the new Trio restaurant, which just opened this fall. Gallego began her pastry career in 1996 as an assistant to Chapman at La Mansión del Rio... Listservs in the Crestview and Allandale neighborhoods have been blazing for a couple of weeks because folks in those areas are terribly disappointed about the closing of the beloved Brentwood Tavern (6701 Burnet Rd., 420-8118). The eatery and venue is overwhelmingly popular with neighborhood families due to its good food, relaxed atmosphere, live-music lineup, comfortable outdoor seating, and kid-friendly playscape. It is also the only restaurant that has ever achieved any business longevity in the Farmers' Market property. Brentwood owners Tim Thomas and Kathleen Macek are having a customer appreciation party on Thursday, Oct. 25, to bid their friends farewell. Macek told us this week that new landowner Paz Dhouty's offer to extend their lease came too late. "We've sold our equipment and found jobs for all our employees – we're gone."... Another sad piece of news is the closing of P&K Grocery (915 W. Mary, 326-3133) on Oct. 20. The notice from owners Robin Kelley and John and Elizabeth Pecore arrived last week, stating in part that: "We opened with the desire to bring to life a collective vision of a corner store, an anchor to a community, and a place that brought folks together in a way that felt authentic and familiar. Recent developments in our family lives played a big part in helping us make this choice [to close]." Some members of the P&K catering staff will continue to operate as Spoon and Co. (912-6784, info@spoonandco.com), and there will be a final clearance sale at the store on Sunday, Oct. 28.Kathleen Macek and Tim ThomasKathleen Macek and Tim Thomas