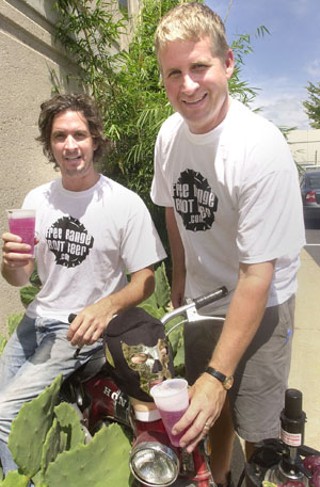 What's the most outrageously hued, lusciously refreshing thirst-quencher in town this season? It just might be Pink Drink organic soda, made from prickly pear cactus fruit and sold at Austin farmers' markets by up-and-coming Austin-based company Maine Root (www.maineroot.com).

Maine Root? Austin? "That's the first question everybody asks," laughs Matthew Seiler, founder and CEO. The company was born in Portland, Maine, in 2001 when boat-builder/fishing guide/inventor/environmentalist/home brewer Seiler was unhappy with commercial root beers, so he made his own palate-pleasing, noncorporate, additive-free version. The resulting organic root beer was such a success that elder brother Mark Seiler quit his high tech marketing job in Austin to become guru of sales and marketing.

For a time, as the root beer took off around the country and the equally organic, sustainably produced Ginger Brew and Sarsaparilla joined the product line, Maine Root was run with one brother in Portland and one in Austin. Ultimately, the siren song of Austin's energy and lifestyle lured Matt to join Mark. "Austin is a lot like Portland," Matt says. "It seemed a natural fit to grow our business here." They maintain close ties in Portland, however: The root beer, Ginger Brew, and Sarsaparilla are still brewed and bottled there.

Once here, Matt was inspired – this time by abundant cactuses growing around their East Austin headquarters – to experiment with prickly pear fruit. "When it rained, the cactus would flower and then make fruit. And I thought, here's something we can work with: a local, organic, sustainably harvested, enviro-friendly resource. I'd had prickly pear margaritas at Ranch 616, and I thought, why not a soda?"

Thus, the birth of Pink Drink. The name might change, but it's Pink Drink for now. (Pink really doesn't do justice to the gorgeous color, but not much rhymes with fuchsia, magenta, or heliotrope.)

These transplanted Maine entrepreneurs are tapping into an ancient regional resource. Prickly pear cactus (Opuntia) has been a revered, nutrient-rich food in Mexico and South Texas for millennia. The plant traditionally is sustaining forage for livestock in times of drought; the fruits, now called tunas (the term brought by the early Spaniards from the Caribbean), have long been made into jewel-toned jellies, jams, and candies.

The Seilers make Pink Drink in small batches (200-300 gallons at a time) on equipment recycled from the former Bitter End Brewery; for now, it's available only on tap. In keeping with the company philosophy of local, sustainable, and organic, the recipe contains agave nectar from Agasweet, lemon juice from Good Flow, and Cielo Water (all homegrown Austin companies).

Matt expounds on the big idea. "Prickly pear is a wild plant resource that grows everywhere, and we're figuring out how to best harvest, store, and utilize the fruits. Our motivation is to create a new revenue stream for ranchers and workers; we want to make a positive economic impact. Look what Chuy's and Central Market have done for Hatch, New Mexico; I want to have the same kind of impact in South Texas."

So far, they're harvesting on five Texas ranches and are looking into bottling options in Mexico. They're planning a bottled version for the near future, but meanwhile, Pink Drink is available on tap at Austin farmers' markets (Saturdays Downtown and Wednesdays at the Triangle) and will be featured at the Austin City Limits Festival. So, think Pink Drink, y'all. Maine meets Mexico – where else but Austin?