Gene's gumbo fakes not the funk on the nasty dunk 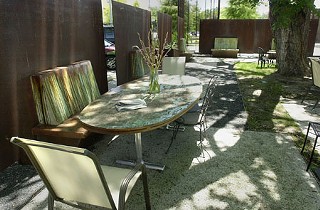 We had a very good time judging the Gumbo Contest at the FunkFest II benefit for Meals on Wheels and More at La Zona Rosa on July 28. Seven area Cajun/creole restaurants presented samples of their distinctive gumbo recipes to the crowd and the judging panel, while authentic zydeco rocked the house. Here are the results: first place, Gene's New Orleans Style Poboys & Deli (1209 E. 11th, 477-6600); second place, Hoover's Cooking (2002 Manor Rd., 479-5006; 13376 Research, 335-0300); third place, Louisiana Longhorn Cafe (200 E. Main in Round Rock, 512/248-2900); crowd favorite that didn't place, Uncle Boudreaux's (11007 Hwy. 290 E. in Manor, 512/272-5200)... Fans of the Middle Eastern cuisine and entertainment that epitomized Ararat will be pleased to know that owner Kelly Abshire has found a way to keep some aspects of her restaurant alive while she looks for a new location. Look for some popular Ararat menu items at Hot Mama's Espresso Bar (2401 E. Sixth, 476-6262), the relatively new Eastside gathering place on the street level of the Pedernales Lofts that boasts an inviting courtyard designed by Big Red Sun. "Now that we're offering beer and wine, I wanted to have more food available, and Kelly was looking for kitchen space, so having some of their food here seemed like a good fit," reports Hot Mama's owner, Holly Skala. Hot Mama's has a variety of good-weather entertainment events planned for the courtyard, including movie nights, belly-dancing demonstrations, and Eastside Saturdays -- monthly community celebrations like SoCo's First Thursdays -- set to commence on Saturday, Sept. 8... The backpack drive continues at McCormick & Schmick's (401 Congress, 236-9600). Between now and Aug. 20, drop off a brand-new, full-sized backpack and/or school supplies at the Downtown seafood restaurant in exchange for $10 gift certificates. The backpacks and supplies will be donated to the Seedling Foundation, a nonprofit that mentors Austin Independent School District students with incarcerated parents... Austin's fast-growing sports-bar chain has opened another new location, this time in Cedar Park. The newest outlet of Pluckers Wing Bar (11066 Pecan Park Blvd., 533-9464) has plenty of big, flat-screen TVs and 7,000 square feet of indoor and outdoor seating space, including the Coop, a signature outdoor deck. Pluckers is owned by UT grads Mark and Sean Greenberg and David Paul, who have just moved their corporate offices to 811 Barton Springs Rd.... Central Market is counting on Austin's legion of Hatch chile fans to come up with a slew of tantalizing dishes featuring the highly prized New Mexico imports in their No Holds Barred Hatch Chile Pepper Recipe Contest. The contest kicks off the store's annual Hatch Chile Festival and offers consumers the opportunity to have their recipes included in the Un-Edited & Un-Tested Hatch Chile Pepper Recipe Book and compete for the grand prize of a $500 Central Market gift card and a year's supply of Hatch chiles. A group of judges will review the recipes and choose the Final Chile Five at each store location. Those lucky folks will compete in a taste-off on Sunday, Aug. 26. Entry forms and complete contest rules are available at the info desk of your favorite Central Market store. Entry deadline is Aug. 18... According to their media relations office in California, there is no truth to the wishful and persistent rumor that Trader Joe's plans to open a store in Southwest Austin, though they did seem touched by the ongoing local petition drive. We'll let you know when and if we hear differently.