A return to tradition with a West Tex-Mex twist 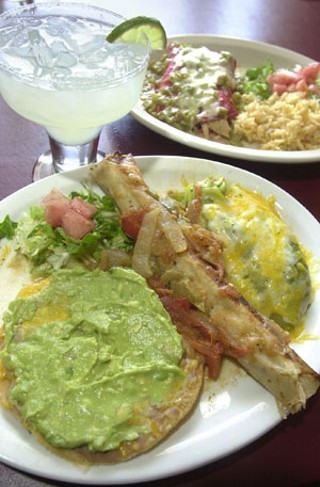 If you hung around Austin in the Seventies and Eighties, you might have some fond memories of the tacos and enchiladas served in Jorge Arredondo's series of funky Tex-Mex restaurants around town (not to mention the distinctive logo of Señor Arredondo rising beneficent from a bowl of chili). Casita Jorge's on Hancock, a vestige of that late lamented little empire, scraped by under a couple of subsequent owners before its purchase in 2003 by Diana Veloz, daughter of West Texas restaurateur George Veloz Sr., whose family operates several Jorge's Restaurants (no relation to Arredondo's former places) in Midland, Odessa, and Amarillo. Veloz shortened the Hancock restaurant's name to Jorge's, maintained its gently aging and quirky decor, and smartened up the menu with new dishes and fresh ingredients, adapting it to include her family's West-Tex-Mex style of cooking.

And what exactly is West Texas-style Mexican food? Not so different, really, although more influenced by the flavors of New Mexico (lots of green chiles) and plenty of grilled beef. Flat-stacked enchiladas with New Mexican red sauce ($9.29) are a good example, as is Carne con Chile Verde ($9.99): a plate of bite-size chunks of pork loin stewed in a mildly spicy green sauce of tomatillos, onions, and Anaheim and poblano chiles. New Mexican Green Enchiladas ($7.99) are an unusual and tasty ensemble of coarsely chopped roasted-green-chile salsa that dresses red-chile corn tortillas filled with cheese, chicken, or beef. There are also many solid variations of the usual Tex-Mex suspects: tacos, enchiladas, chalupas, nachos, fajitas, numerous combination plates, and $6.95 lunch specials.

A menu standout is Veloz's take on chiles rellenos called Chile Relleno Lampriados ($12.29): two roasted and stacked Anaheim chiles enveloped in an unusually light and fluffy egg-white batter and filled with piquantly seasoned beef, shredded chicken, or cheese, bathed in a tomatoey salsa española. The best flavor combination is one relleno with cheese stacked on a piquantly seasoned beef relleno. Believe me, you won't come away hungry from that one. The charro beans and Mexican rice pilaf that accompany most dishes are perfectly cooked and particularly tasty, as are the fresh, house-made flour tortillas (it's attention to things like these that makes all the difference). The two table sauces (green and red) for the requisite baskets of chips are freshly made, and both have a pleasantly serious kick, particularly the green.

In a nod to Austin's desire for healthy options, the menu contains an extensive selection of vegetarian and vegetable-centric offerings, including a big avocado salad ($6.99), a zucchini-and-mixed-fresh-vegetable salad ($7.99), veggie enchiladas ($8.99), guacamole-and-grilled-pepper tacos ($8.79), and the Mitsy Special ($5.99), named for the owner's sister-in-law: a flour tortilla filled with roasted green chiles and cheese, dressed with sour cream and salsa española. Vegetarian fajitas ($9.99) seem an oxymoron to me, although I'm always glad to see lots of variety available for non-meat eaters who dine out with carnivores. In general, Veloz places a premium on freshly prepared, unprocessed ingredients, including cheeses.

Another feature that differentiates Jorge's from many neighborhood Mexican-food eateries is the fully stocked bar and cocktail menu. As might be expected, the focus is on tequila, with 25 available varieties and seven margarita variations (six of which mercifully contain no sweet fruit, just various combinations of tequila, liqueur, and citrus). There are at least 30 beers on offer, categorized as Domestic, Sissy Expensive, Macho Mexican Imports, and Weird. The wine list is minute, but it does contain a couple of appropriate choices from Casa Madero near Monterrey, Mexico. There's room for some judiciously selected additions of other Mexican and/or Texan wines to bring the wine list up to the standards set for the tequila and beer selections. There are different drink specials available every day.

It probably took the regulars a few enchiladas to get used to the menu adjustments and to stop calling the place Casita Jorge's, but this laid-back, family-friendly restaurant has returned to its tradition of low-key popularity. It is as casual and crowded as it ever was; the service still has a friendly, old-school-Austin feel to it; and the covered patio, the bar, and several small dining rooms are full of convivial patrons from the surrounding neighborhoods. Every hood needs such a spot: welcoming, unpretentious, with solid good food and drink.