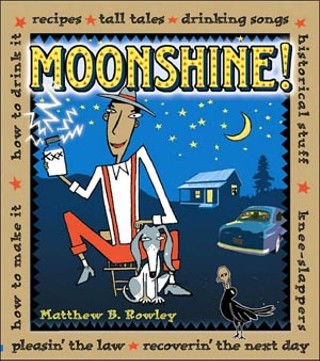 Moonshine!: Recipes, Tall Tales, Drinking Songs, Historical Stuff, Knee-Slappers, How to Make It, How to Drink It, Pleasin' the Law, Recoverin' the Next Day

by Matthew B. Rowley

"The history of moonshine," Matthew Rowley writes, "is as much about human spirits as it is about alcoholic spirits; it is about conflict and violence, regulation and rebellion, and – maybe most of all – independence and ingenuity."

Moonshine. White lightning. Corn liquor. Joy juice. Known by myriad monikers, scourge of Inland Revenue, and celebrated in song, story, and film, illicitly distilled homemade liquor has enjoyed a venerable place in American history. Although distilling alcoholic spirits can be traced to 3,500BC in Mesopotamia and the practice was introduced into Europe by ninth century Arabs (al kohl meant the essence, or spirit, of wine), the first American whiskey was distilled in Virginia in about 1620. However, moonshining as a way of life didn't evolve until the Scots-Irish began arriving in America in 1717.

Food historian and spirits connoisseur Rowley has written a portmanteau volume that contains not only a comprehensive illustrated history of U.S. home distilling (including its European precedents and parallels in other parts of the world), but a step-by-step primer for making spirits: legal ramifications, permits required, how to build a still, sources for materials, and recipes. The author states that the text is "intended to be the next best thing to an on-the-job apprenticeship."

There have been other admirable, if nostalgic, studies of American home distilling (notably Joseph Dabney's 1974 Mountain Spirits) that mourned the making of homemade liquor as a dying art. Rowley's view is that moonshining is quite alive and well; he imagines the day when artisan distilleries are as common and appreciated as brewpubs.

It's a real shame that the book's publisher did not take its design as seriously as the author's thoughtful and thorough work deserves. For some inexplicable reason, the cover and many of the illustrations depict condescending stereotypes of jug-toting hillbillies, presumably intended to be archly humorous. What were they thinking?