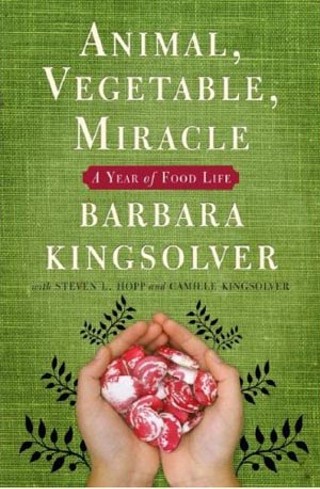 by Barbara Kingsolver, with Camille Kingsolver and Steven L. Hopp

In Barbara Kingsolver's first work of narrative nonfiction, she passionately records a year lived in complete harmony with the seasons and their products and the trials and tribulations that her family endured in order to consume only what they and their farming neighbors produced. Originally from the Appalachian region, where she grew up among tobacco farmers, Kingsolver spent 25 years living and writing in Tucson, Ariz. When she and her family made a commitment to consume only locally grown foods, they returned to a family farm in Appalachia, since very little of the food eaten by Arizonans grows locally. Once on the farm, they would forgo all "foreign food" pleasures in their attempt to establish a more intimate relationship with local, seasonal foods. Food items that might be considered commonplace in the American diet – chocolate, pineapple, shrimp, or avocados, for instance, became absolute "no-no's" in the Kingsolver household.

Starting at the local farmers' market, the author and her family set forth on their new lifestyle in the spring. Their first crop of spring asparagus and wild morel mushroom foraging adventures kept their spirits up. A family of avid gardeners, they planted and nurtured hundreds of heirloom seedlings of tomatoes, peppers, greens, melons, squashes, potatoes, onions, and many other fruits and vegetables, enjoying their fleeting time of peak summer flavors and "putting them up" for the leaner times of winter. Each member of the family contributes to the narrative, as well as to the family enterprise. Interspersed within the narrative are husband Steve's sobering and sometimes bleak musings on industrial agriculture, mono-crops, and fossil-fuel consumption. Eighteen-year-old daughter Camille's lighthearted commentary after each chapter features her seasonal menus and fresh, easy recipes, including some that she created. The enthusiastic participation of Kingsolver's children encourages hope for the next generation.

While the book urges readers to follow the family's example, it is not preachy but rather, an inspiration. As a longtime fan of her work, I'm glad to see that we have much more in common than I would have thought: a love for gardening and cooking, a respect for preserving one's cultural heritage, and a desire to make a difference in the way we live and eat. This book is an absolute must for the reading list of anyone interested in reconnecting with the source of his or her food.