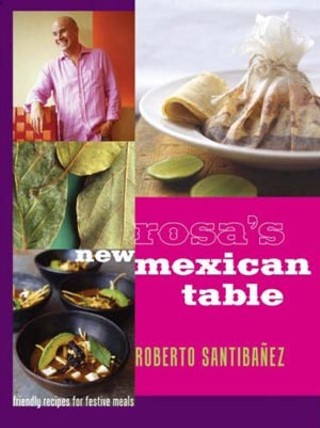 When Le Cordon Bleu-trained chef Roberto Santibañez took over the kitchen at Austin's landmark Fonda San Miguel restaurant several years back, the established clientele was initially wary of the innovative dishes he created to supplement the traditional Interior Mexican menu. Before long, however, both the charming man and his subtle, sophisticated culinary stylings won the crowd over completely. Santibañez is now culinary director of the Rosa Mexicano family of restaurants, assisting them in nationwide expansion. Rosa's New Mexican Table is his new cookbook, showcasing dishes that are popular in the restaurants, as well as many of his own creations.

Santibañez is a proponent of the nueva cocina movement in Mexican cuisine that utilizes contemporary ingredients and new techniques in the evolution of classic Mexican dishes. He's likely to produce moles with prunes, sauces with dill, and steaks with Roquefort cheese, all with delicious results. The chef does provide good basic information necessary to create the flavorful building blocks of classic Mexican cuisine, describing those recipes as los indispensables.

Sampling dishes from the chapter on starters, I was particularly impressed with the Garlicky Shrimp and Mushrooms spiked with fiery chile de árbol and the delicate Crab Empanadas in a red masa dough. The restaurant's signature guacamole that derives its layers of flavor from a distinctive chile paste made in a molcajete is very appealing. In the entrée section, Santibañez includes his own versions of such historic traditional Mexican dishes as Cochinita Pibil and red snapper Veracruz-style right alongside Seared Duck Breast in Prune-Pecan Mole. The unconventional Mexican Club Sandwich features the indispensable Adobo Marinated Chicken, ham, bacon, avocado, and queso Chihuahua on ciabatta rolls. The sandwich is a tasty fusion masterpiece, as is the sophisticated Rosa's Cobb Salad, utilizing the same chicken, pungent Spanish Cabrales cheese, and chile-spiked croutons in an avocado-dill dressing.

Oddly enough, the attractive book does not evoke much of a sense of the Rosa Mexicano restaurants themselves, but Santibañez's food makes a clear statement. This is not your abuela's Mexican food. The recipes in Rosa's New Mexican Table are innovative, approachable, and delightful, much like Santibañez himself.