The challenges in Austin

In the restaurant business, being "green" is a particularly bold move and shows a breathtaking idealism. There are two brand-new local restaurants that consider eco-friendliness to be a vital part of their enterprise: Bull & Boar in Del Valle and Leaf on West Second.

Bull & Boar has an advantage that few possess: It's the brainchild of brothers Andrew and John Page, whose parents own and operate Peach Creek Farm, a sustainable agriculture operation that produces free-range Berkshire pork, as well as pasture-raised beef and poultry. The largest hurdle for restaurants hoping to maximize sustainability is the expense of free-range, natural, and organic meats; it's a hurdle the Page brothers are able to clear, thanks to Mom and Dad.

Key to the restaurant's mission is the commitment to local producers. While it's impossible to rely entirely on local growers (growing lettuce in Texas during the summer is a minor miracle, for instance), chef Andrew Page varies the menu seasonally to keep it as regional as possible. "Every ingredient that travels a short distance to my kitchen, rather than being flown here on a jet plane, reduces our carbon footprint," he explains.

The Pages buy produce directly from area farmers and buy organic when that option exists. They compost all of their kitchen waste and coffee grounds and use the compost to fertilize the pastures at Peach Creek Farm. All recyclables from the Bull and Boar are hauled into Austin for recycling at the restaurant's expense, since the program Austin residential customers enjoy is not available to area businesses. And, finally, all of Bull & Boar's used frying oil is donated to be made into biodiesel. 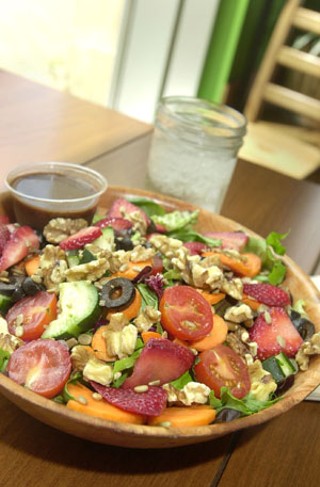 "We want to be responsible business owners. We want to be part of the solution," Andrew says. "And real food tastes much, much better than the prepackaged and frozen food people have gotten used to. Our country-fried steak is grass-fed beef, hand-pounded and battered with flour and free-range eggs, served with homemade bread and farm-fresh vegetables. I would put it up against anyone's."

The Page brothers have set a timetable to achieve long-term sustainability goals: In the next three years, as they are able to obtain more suppliers, they hope to serve 95% locally produced food.

"We will still have to use imported coffee and tea, but even the pioneers had to import those!" Andrew Page laughs. He would like to use wind power for the Bull and Boar's electricity, but because they are not inside city limits, they don't have that option. "If Bluebonnet Electric begins a wind-power program, we would be the first to join up. We want to get our carbon footprint as small as possible, and we are committed to that. We want to do things right, and we really believe that there is room in this industry for that."

Leaf opened its doors less than a month ago, and despite being in the middle of a construction zone with no visible parking for blocks, word of mouth has already brought in a steady clientele that just keeps growing. Partners Jon Michelson, Jordan Feiner, and Adam Ruben came up with the concept for Leaf some time ago: a restaurant specializing in quick, healthy entrée salads made out of premium ingredients, with a strong commitment to local farmers, vendors, and the environment.

After considerable research, they decided that Downtown Austin, near Town Lake, would provide the perfect location. Like the Page brothers, they are committed to recycling in spite of the fact that the city of Austin provides no recycling service to city businesses; they recycle at their own expense. Leaf also creates no landfill waste; all that is not recyclable is biodegradable. Their to-go utensils, cups, straws, and "hot" containers are all made from compostable potato starch- and/or corn-based plastics that are no worse for the environment than carrot scrapings and banana peels.

A good percentage of the salad-makings Leaf uses is organic, and they purchase as much as they can from the twice-weekly Farmers' Market Downtown, a mere block away. Although their hard-boiled eggs and sliced beef are at present conventionally produced, they use chicken, bacon, salami, and prosciutto that are antibiotic- and hormone-free.

All of this dedication to genuine freshness pays off: Leaf's salads are amazing. The set menu consists of 12 big entrée salads, and each of the "Big Twelve" salads are made with wonderful "extras" that set them apart: The Caesar Chavez has hearts of palm and hard-boiled eggs in addition to romaine, Parmesan, and croutons; Abbi's Asian Chicken has edamame beans as well as chicken, cabbage, mandarin oranges, crispy noodles, and toasted almonds. The Capitol City Cobb, while having the standard ingredients (chicken, hard-boiled egg, avocado, bacon, black olives, blue cheese, and tomatoes) is deeply satisfying and easily the best I have had in town. Each salad comes with a slice of artisan bread, and each is so enticing that I found it agonizing to decide on just one.

Leaf has hit the ground running in terms of eco-friendliness, but there are still goals to be met. They want to donate their kitchen waste (carrot peels, lettuce stems, and the like) to be composted but have not yet found a taker (since they make only salads, they create more compostable matter than any home gardener could use). And, although located in Austin, they are unable to sign onto the city's wind-power program, not unless they can convince the entire CSC building, in which they are located, to go sustainable. "That would definitely be a goal," laughs manager Michelson. "I'm just not sure it is a realistic one!"

The Bull and Boar, Leaf