Finding God in the Gumbo

Once in the Ninth Ward and now in the Hill Country, the Smoking for Jesus Ministry serves up Real New Orleans Style fare with a side of spiritual nourishment 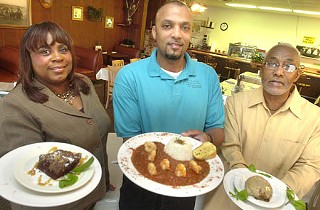 When life gives you lemons, make lemonade. So easy to say. But what do you do when life gives you Hurricane Katrina, decimating your entire community and way of life? The answer for one New Orleans East church group was: Stay together, trust the Lord, move to Texas, make gumbo. And create a new life in the Hill Country.

Every restaurant, like every picture, tells a story of hopes, dreams, history, hard work, and visions of success. This is the story of how the Real New Orleans Style Restaurant came to be in the heart of the Texas Hill Country.

Round Mountain (population: 118) in Blanco County is not much more than a wide spot on U.S. Highway 281, an hour west of Austin between Marble Falls and Johnson City. It's the tiny hub of a rural ranching community founded in 1854, a stage stop on the mail route between Austin and Fredericksburg. Today, the town center contains the post office, a gas station, the volunteer fire department, the Cattleman's National Bank, and a sprawling livestock-auction barn. A few buffalo occasionally graze in the pasture next door. Altogether, an unlikely setting for a bustling Creole restaurant serving étouffée, steak Orleans, and catfish po'boys, where cheerful women greet diners with welcoming smiles and terms of endearment, and the chefs are seasoned veterans of French Quarter kitchens.

Occupying the former Roundup Restaurant truck stop, the Real New Orleans Style Restaurant is run by the Smoking for Jesus Ministry, led by Pastor Willie Monnet Sr. and his wife, Claudette. And yes, everyone asks about the name, which has nothing to do with barbecue. Pastor Monnet explains that the inspiration is from Revelations 3:16, which castigates lukewarm faith that is neither hot nor cold. In contrast, the SFJ Ministry is "smoking for Jesus, on fire for the Lord."

The nondenominational church, founded in 1996, was originally located on the Chef Menteur Highway in New Orleans East, in the Ninth Ward. As part of their outreach, the church members operated a neighborhood beauty salon, lawn-care service, restaurant, car wash, nursery, and summer camp. Monnet previously had been minister to prisoners, and his pastoral focus firmly includes jobs, community, and education in addition to spiritual nourishment.

Like everyone on the Louisiana Gulf Coast, the SFJ members' lives changed forever in late August 2005. On the Saturday before Katrina's landfall on Wednesday, church elders strategized the congregation's evacuation. They made arrangements with the Church Alive Conference & Retreat Center in Lumberton (north of Beaumont) and began calling church members. Everyone was to meet in the church parking lot early Sunday morning with one small bag each. Those who didn't have cars were assigned rides with those who did.

At 8am, 20 vehicles bearing 42 families left for Lumberton. Of the 187 travelers, the youngest were 4-day-old twins. Because Orleans Parish was the last called to evacuate, it took 20 hours to make the 4-hour drive. "We were prepared to be away for three days," remembers June Roth, the church's event coordinator. "No one thought we'd never come back," she says softly.

"When we finally arrived in East Texas, the whole Hardin County community opened their arms to us. We may have been the first New Orleans people to get there, and they overwhelmed us with donations and supplies; we shared them with others as they arrived. We were in Lumberton for three weeks. Our kids were in school, many of the group had found jobs, and we'd modified the dorms for families. But then, Hurricane Rita came, and we had to evacuate again because the retreat center wasn't a certified shelter."

It took the SFJ caravan 19 hours to reach temporary accommodations at the Lakeview Baptist Assembly in Lone Star (normally three hours away). After a few days, they migrated to a hotel in Dallas, then to Canyon of the Eagles resort near Burnet, a hotel in Austin, and the Burnet Holiday Inn Express.

During that peripatetic time, Monnet and a small reconnaissance party got back into New Orleans to check on the church and the neighborhood. They returned to the flock with videos of the devastation. "That's when we knew we couldn't go home," Roth says. "It was extremely stressful. But, throughout it all, we never missed a service. We didn't fall apart because of our faith and the generosity of Texas people."

A Home in the Hill Country

In October 2005, SFJ learned about Vistas Apartments in Marble Falls. It seems that 16 new buildings had been built in anticipation of a school district workforce that hadn't materialized, so most of the units were for rent. Claudette Monnet says, "We'd been on the road for so long, this apartment complex looked really good; we had no doubt that this was the right place for us. Family by family, we got qualified to move in." Two full months after leaving New Orleans, the 180-plus SFJ travelers had found a new home.

The kids were quickly enrolled in Marble Falls schools, and many adults found work, although often not in their fields and sometimes for reduced pay and with long commutes. As can be imagined, the adjustment from life in semitropical, multicultural, urban New Orleans to the rural and rocky Hill Country was tough. "Marble Falls and we were both in culture shock. It was hard on them and hard on us. Yes, there was some stereotyping," says one congregation member, "but there was also generosity and love." SFJ held church services and activities in Johnson Park, at the Marble Falls First Baptist and Marble Falls First United Methodist churches, and ultimately in the Marble Falls High School cafeteria.

Four months later, in February 2006, the SFJ group demonstrated their thanks to everyone who'd helped them. "We wanted to show people that we hadn't come just to take but to contribute to the community," Roth explains. "So we threw a 'Hill Country – New Orleans Style' party at the First Baptist Church in Marble Falls. We provided entertainment. We served gumbo, red beans and rice, étouffée, and fried chicken, and more than 250 people came and had a good time. That was really the turning point." Monnet adds that they made models and exhibits about the businesses the church formerly had run in New Orleans.

Birth of a Restaurant

In early 2006, SFJ learned that the former Roundup Restaurant in Round Mountain (10 miles down the road from Marble Falls) was available. Furnished, equipped, and pretty much ready to go, it seemed like a providential match; the church group had restaurant-management experience and needed a business, and Roundup owner Will Moursund had an empty cafe. "It was perfect for us," Claudette Monnet says. The deal was done, and Real New Orleans Style Restaurant welcomed a packed house to its grand opening on July 7, 2006.

The restaurant, like all SFJ endeavors, is a communal affair. The waitstaff consists of members of the congregation, and most have previous restaurant experience. Traveling members bring back Community Coffee, spices, and special ingredients from New Orleans. The two chefs, Sean Richard and Erin Legier, are cousins and, between them, have beaucoup years in New Orleans restaurants, including Russell's Marina Grill, Cafe Sbisa, the Smokehouse, Danny & Clyde's, and Hank's Seafood.

Richard, who specializes in grilling, frying, sauces, and specials, describes the restaurant's food as a mix of creole, home-style, and Cajun. "Everything you all eat, we eat; we just fix it different," he says. "We're unique around here; nobody does what we do." Legier takes care of the barbecue (ribs, sausage, and chicken) and the pot cooking (red beans, gumbo, étouffée). Family-recipe desserts (bread pudding, chocolate cake, sweet-potato pie, lemon-meringue tarts, 7Up cake) are prepared by Ella Ford, Juanita Fraise, and Dolores Roland, affectionately known as the Three Drama Mamas. "Because of their personalities," Claudette Monnet says sweetly.

The Real New Orleans Style menu is an eclectic homage to Louisiana food: brochettes of lightly sautéed Gulf oysters wrapped in bacon ($6.99), shrimp creole in a blond roux ($10.99), and, of course, smoky, peppery, deep-dark gumbo ($4.99/$7.99) with chicken and sausage. Hungry eaters will appreciate the various grilled or fried seafood platters ($10.99-$18.99) and smothered pork chops with peppers in brown gravy ($8.99/$11.95). There are always a few daily specials on offer, including Seafood Legier ($12.99) that Legier first concocted for a customer who wanted both fried fish and crawfish étouffée.

Although the restaurant is a thriving business that serves a full house most days, the SFJ Ministry isn't resting on its laurels; there are plenty more big plans in the works.

Monnet explains that they'd looked for land suitable to build a church and nearby houses in order "to create a community. But we realized it would just take too long to start from scratch. We found a ranch for sale that already had a church on it and enough acreage to build our homes. We closed on it last November." This is the former Buckner Baptist Boys' Ranch on the shores of Lake LBJ, an orphanage that was built in 1949. It's about 15 minutes from the Vista Apartments.

Monnet is quick to say that this is a long-term project; the ranch needs work, and the home-building phase will require infusions of money. But the congregation includes experienced mechanics, contractors, plumbers, carpenters, and maintenance people ready to apply their expertise. Plotting and clearing residential streets have already begun.

Starting a new life in a totally different environment has been far from easy, but these are resourceful people with a mission and a vision. And as Roth says, "We brought our community with us; it makes it easier to adjust." Making inroads into an existing community always takes time, but good food prepared with skill and served with loving pride is a great means toward mutual respect and understanding. And lest anyone forget what brought the SFJ group to the Texas Hill Country, just look at the Real New Orleans Style Restaurant menu. If you're really hungry, order the Hurricane Seafood Platter, Category 4.