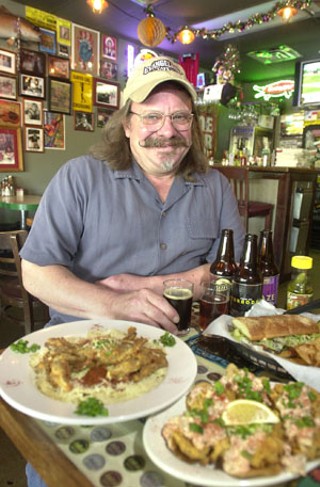 Austin, like any city, is a conglomeration of neighborhoods and communities. While neighborhoods are defined geographically, communities are made up of people with shared interests – cultural, political, philosophical, ethnic, musical, culinary, whatever. Places in cities emerge for like-minded people to get together and enjoy those things that make them a community, and Evangeline Cafe is such a place, a harmonic convergence of Austinites who love Cajun food, culture, hospitality, and music.

A rollicking little restaurant in an innocuous South Austin strip, Evangeline was opened in 2004 by chef/owner Curtis Clarke (whose elegant mustaches are almost as famous as his cooking). A Lake Charles, La., native, Clarke has spent three decades in the food business, and it shows. Although Evangeline is the ultimate laid-back joint, service is attentive and knowledgeable, and the kitchen consistently produces expertly prepared, beautifully seasoned fresh Louisiana food, from the traditional (seafood or chicken-and-sausage gumbo, jambalaya, shrimp or crawfish étouffée, red beans and rice, boudin, shrimp creole) to the innovative riffs using classic ingredients.

One of these creations is Oysters Contraband ($8.99) – six fat, fried Gulf oysters, presented on house-made potato chips and dolloped with piquant sausage rémoulade. Another is Gold Band Creole ($13.99), a spicy concoction of lightly fried shrimp and creole sauce served over fettuccine with Cajun aioli and Parmesan. My favorite is the perfectly sautéed catfish fillet smothered in luscious crawfish-and-corn macque choux ($13.99).

The kitchen really shines in the battered-and-fried department – in addition to chef Clarke's individual batters for each seafood, you can be sure that anything from the deep fryer will be fresh, crisp, nongreasy, and smokin' hot. You simply cannot go wrong with fried oysters, shrimp, catfish, or crawfish, in po'boys (small $5.75; large $9.50), baskets ($7.99-8.50 with fries or dirty rice), or dinners (most $9.99; $15.99 for the combo with a side of gumbo or red beans and rice). Washed down with an Abita beer ($3.50), you'd think you were in Breaux Bridge.

Lovely menu lagniappes are pistolettes – Cajun-style dinner rolls imported each week from Lake Charles. They serve as wonderful sops for the saucy dishes like étouffée and gumbo, and they're sublime for dessert, stuffed with caramelized chopped pecans and swimming in warm praline sauce ($3.75).

You can't talk about Evangeline as Cajun culture center without mentioning the music – Clarke maintains a varied live-music lineup several days each week. Charles Thibodeaux & the Bayou Cajun Band play every Monday evening; their skillfully soulful renditions of traditional tunes are guaranteed to bring dancers out among the tables. Things get started on Friday nights when bands begin after the kitchen closes at 10pm. April includes swamp rockers Larry Lange's Lonely Knights and Greezy Wheels.

The name Evangeline comes from the title of Longfellow's 1847 epic poem that recounts the forced migration of French settlers from Acadia to southern Louisiana in 1775. The tragic heroine Evangeline became a Cajun icon; in 1930, a statue in her honor was erected in St. Martinville, La. At Evangeline in Austin, Clarke and his crew continue the tradition, honoring the best of Cajun food and music.