Enjoying good food and drink for $10 a day during SXSW 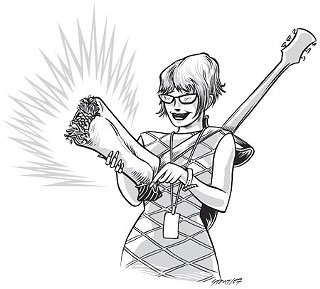 Hopes of becoming rock stars are pinned to many a band's South by Southwest showcase. They'll endure adversities of all kinds to travel to Austin and have a chance at impressing the right people with raw, awesome talent. Those adversities often involve finances: wages lost, savings depleted, and even jobs sacrificed to make the trip. This means that there will be bands coming to the Festival who will be sleeping in their vans, on top of their equipment, hoping that $50 will be enough to see them through five days of SXSW.

This article is for them: the van-dwellers, the broke and hopeful, the persistent and the optimistic. Yes, you too can experience Austin in a meaningful way on very little money.

I know, because I lived as a broke Austin musician for about 20 years. Our touring per diem in Glass Eye was $5. That money had to pay for an individual's food, tips, stamps, postcards, and film. (Shakes cane angrily.) "We didn't have any Innernet back then! Or digital cameras! We had to actually write letters and put stamps on them! And buy film and have it developed! And if we wanted to make a phone call, we had to pull over and find a pay phone!" (Drops back into senile dozing.) Adjusted for inflation, I think that comes to about $10 a day. That's the figure we'll work with here: I'm going to assume that you have about $10 for your daily food-and-beer needs.

Allow me to put in a disclaimer about fast food. I assume that you had to eat your fair share of highway fast food on the way here and that you'd prefer to experience actual food, preferably regional fare. Your cuisine of choice is therefore going to be Mexican.

Mexican food is to Texas what Italian food is to Milwaukee. It's cheap; it's authentic; it's everywhere. When Texans stray, they inevitably return, drawn back by the siren song of inexpensive, kickass Mexican food, without which life cannot truly be happily lived once you have tasted it. Now that you're in Austin, this is your chance to saturate yourself with it. As an added bonus for vegetarians, Austin is the spot on the map where hippie culture meets Mexican culture: Most of our Mexican restaurants are vegetarian-friendly, and many serve only vegetarian beans and rice.

You can get by on just two meals a day: breakfast and dinner. Let's start with breakfast. You don't want to drop a lot of dough here, but you will need something in your stomach to help dispel your hangover. Your best bet will be to acquaint yourself with the breakfast taco: a flour or corn tortilla filled with your choice of eggs, potatoes, bacon, chorizo, beans, cheese, and rice. (Usually the flour tortillas hold more filling, so I recommend flour.) Ranging in price from $1 to $1.75 apiece, there is no better deal in town, and the hot sauce will help clear your head.

Most Mexican restaurants have breakfast tacos on the menu, and typically they're the cheapest item. You might get free chips and salsa, too – especially closer to lunchtime – which goes a long way toward rounding out a single-taco breakfast. Some spots charge for chips and salsa nowadays; it will say on the menu. For your caffeine fix, I recommend iced tea. It will also rehydrate you, which you will desperately need. Plus, iced tea is always a never-ending refill, enabling you to drink endless glasses.

Deserving of special mention is the Tamale House at 5003 Airport Blvd. (453-9842). There used to be Tamale Houses all over town, but now the Airport location is the only one left. It's cash-only, and there's no item on the menu more expensive than $5. The quality is superb: These are some of the best breakfast tacos in town. Get there before the 3pm closing time.

Another cheap-taco option is the taco trailer. Now, I understand that these trailers look a little scary, a little fly-by-night, a little like maybe they serve "mystery meat." This is not the case. In fact, the level of cuisine artistry at taco trailers is usually high, as they're typically manned by Mexican cooks whose standards are exacting and purist. Torchy's Tacos at 1207 S. First is dependable and stationary, and their tacos are on the large side. Their hot sauces are marvelous; the recipes used at Torchy's have won the Chronicle Hot Sauce Festival contest numerous times. Many of Austin's other fine taco trailers are mobile: If you see a promising taco trailer, don't be afraid to sample their offerings. They are truly bargain-tastic!

Austin has almost reached a Seattle-like saturation of hip coffee shops; There's practically one on every block. As alluring as a double cappuccino is, on $10 a day, you can't afford it; they run $3-plus just about everywhere. If you just can't live without serious coffee, get a shot of espresso: It'll do the job for about a buck. Most coffeehouses are Wi-Fi hot spots, making them great places to check your e-mail, too.

Getting a cheap, delicious meal is pretty easy in Austin. Getting it during SXSW without having to wait an hour is a little harder. My first suggestion is to eat early, as close to 5pm as possible. You'd think that restaurants would clear out around 8:30 or 9pm, because the music is starting, but that has not been my experience. Eat early if you don't want a long wait.

Mexican food is still going to be your most economical and festive choice, and most places will have something on the menu in your price range. If nothing else, an excellent meal can be made practically anywhere out of one side order of rice, one side order of beans, and a side order of tortillas. Construct your own rice-and-bean tacos, complement with baskets of free chips and salsa, and voilã! You are well-fed. (This meal was a Glass Eye standard for many years and can be had for as little as $3.50.)

Check out Chuy's on Barton Springs Road at least once. It offers a free buffet of chips, salsa, queso, and taco meat to all bar customers and patrons waiting for a table. No one will give you the stink eye if you buy a single beer or frozen margarita and proceed to jam yourself full of some of the best queso and hot sauce in town. It's a great place to actually eat a meal, too, if you're willing to wait an hour or two for the table.

Another thrifty dinner option is the burrito. Burritos fill you up for cheap, and Freebirds World Burrito offers monstrous varieties ranging in price from $3.75 to $7. Freebirds has four locations around town; the closest to SXSW's goings-on are at 515 S. Congress (462-3512) and 1000 E. 41st in the Hancock Center (451-5514). Freebirds uses all fresh, natural ingredients and has vegetarian options, too. Definitely the place to go if "filling" is your major criteria.

Texas-style barbecue is another regional delight; although a barbecue plate just about anywhere in town will use up your whole $10, barbecue sandwiches will fill you up and not destroy your meager cash supply. Any of our area barbecue joints will deliver you a yummy, cheap, filling brisket or sausage sandwich for between $3.50 and $5. Free onions, pickles, and jalapeños will make your sandwich larger.

Looking for a sub? ThunderCloud Subs is the real deal: quality good-sized sandwiches made fresh by friendly counterculture folks. Sandwiches start at $2.09, and even the most expensive (large turkey, bacon, avocado, and cheese) is only $5.69. ThunderCloud has 20 locations around Austin; the closest ones to Downtown are at 201 E. Riverside (441-5331) and 903 W. 12th (322-0154).

I would be remiss if I didn't mention Veggie Heaven at 1914 Guadalupe (457-1013) for those of you who might be hankering for vegetables other than hot peppers. Although the entrées run in the $8 range, the portions at Veggie Heaven are enormous. The general thrust of the place is Asian; it's a great favorite with students.

Of course, your most economical option is to go buy a 12-pack and slam it back in your parked van before you hit the clubs. This option is so very much cheaper than any bar is going to be that nothing else can really compare, except getting to drink for free.

Ah, drinking for free. My favorite kind of drinking. How can this be accomplished? Well, one thing that happens during SXSW is that various music-related businesses – such as record labels and publishers and agencies – have parties where bands play and there is a keg. These parties are usually in or near clubs and bars and, if the weather is nice, often outside. Sometimes there is free food, as well. Most of these parties take place between 2 and 6pm, and most do not require an invitation of any kind. After all, the entities throwing them are trying to create a buzz about their business or the bands they represent, and they want a big crowd. Throwing advertising dollars to the wind is the order of the day.

So, cruise down the major music thoroughfares of Austin between 2 and 6pm during the Festival, and listen for live music being played over a PA. Head for the sound, and you might find one of these parties with their free kegs and food. This year, many of them will be at Brush Square Park at Fifth and Neches; others at restaurants and nightclubs. If you were wise enough to take the registration instead of the money (bands will know what I am talking about), there's an alphabetical list of these parties in the music directory in your swag bag. You can also view the top-secret list at 2007.sxsw.com/music/parties.

Last but not least, what about late-night eating? After the clubs close, it's time to eat again, especially if you last ate in early evening. My No. 1 endorsement is the tacos al pastor trailer on East Riverside, Especialidad Tacos al Pastor: It's cheap, the food is great, and you won't have to wait for an hour. Two other great places for a late-night bite are Magnolia Cafe (2304 Lake Austin Blvd.) and Magnolia Cafe South (1920 S. Congress). Both are open 24 hours and have some cheap stuff, but be warned: They will be mobbed, especially between 2 and 4am. Sam's BBQ at 2000 E. 12th (478-0378) is open until 3am Friday and Saturday and until 2am Sunday-Thursday, and though not nearly as cheap as Especialidad Tacos al Pastor, it's still cheap and is usually less crowded than the Magnolias. Another happening spot is Star Seeds Cafe (24 hours) at 3101 N. 1-35 (478-7107). Star Seeds is a mite pricier but renowned for its late-night hospitality.

Good luck! Have a great conference, and I hope this has been helpful. In the words of David Essex: Rock on! 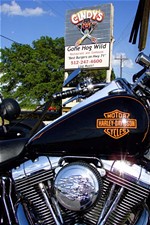 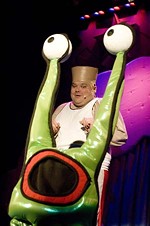