'Luby's Recipes & Memories: A Collection of Our Favorite Recipes and Heartwarming Stories' 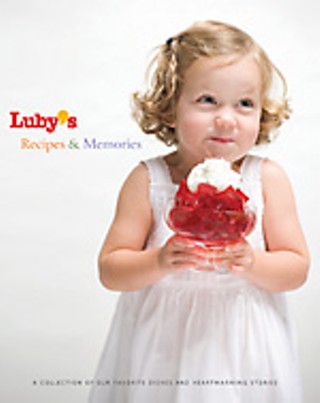 Luby's Recipes & Memories: A Collection of Our Favorite Recipes and Heartwarming Stories

Successful Houston restaurateurs Chris and Harris Pappas became stewards of the legendary Luby's cafeteria brand in 2001. As the third generation of an immigrant family that had pursued the American dream and prospered in the restaurant business, they were tailor-made to revive the floundering company. Under the Pappas brothers leadership, Luby's is definitely making a comeback. The quality of the food and service are improving; the advertising slogan, "tastes like Texas, feels like home," is very inviting; new stores are planned for 2007; and the company has published an attractive cookbook that commemorates 60 years of feeding Texas families. The cookbooks are available at Luby's cafeterias.

The 60th anniversary cookbook offers more than 120 triple-tested recipes illustrated with the mouthwatering food photos of respected Houston photographer Ralph Smith. Longtime people-pleasers, such as baked-fish almondine, chicken-fried steak, carrot-raisin salad, macaroni-and-cheese, and Chocolate Ice Box Pie, are all included. Recipes for the moist corn bread and pillowy dinner rolls that complete every Luby's meal are here, as well as the recipe for the wonderful cinnamon rolls that seem to have disappeared from the restaurants altogether. Newer favorites, such as pecan-crusted tilapia, spicy Asian salmon, and tres leches cake, also make an appearance. It was somewhat disconcerting to find recipes calling for cake mixes or canned soup in a cookbook from a company that earned its reputation with "from scratch" cooking, but the introduction explains that some recipes were "modified for the home kitchen." The recipes are all definitely accessible.Ê

The book opens with a very brief history of the popular chain and is liberally seasoned with smiling photos of happy diners. Many customers relate charming anecdotes, describing everything from wedding receptions to regular weekly family meals at Luby's and what those large and small occasions meant to their families over the years. A Katy woman shares the story of how an inside joke became the special code that meant her family would be gathering at Luby's for dinner: "Momma is cooking dinner tonight, and we're eating in the BIG dining room!"