Jay McInerney's 'Hedonist in the Cellar'

A novelist's take on wine 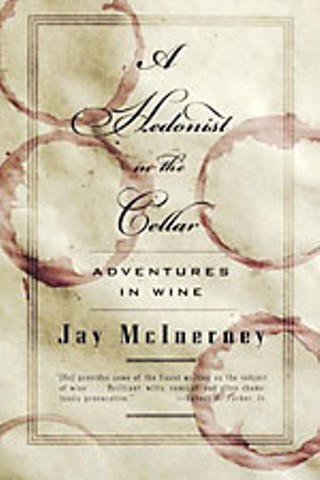 If it is possible to be in love with a thing, an inanimate slab of paper and ink, then I will declare my love for the wine writing of Jay McInerney. Hailed as a wunderkind after the release of his 1984 book, Bright Lights, Big City, he started writing about wine in the midst of fiction-writer's block.

He was afraid that he didn't have the requisite wine-geek vocabulary, so he decided to compare wines to authors and music and anything else that was in his circle of interest. Burgundy is compared to Turgenev; Bordeaux, Tolstoy; Dostoyevsky is the Rhone; Napa Valley is Hemingway; and Santa Barbara pinot noir is Fitzgerald. The Italians "Qunitarelli and dal Forno are the Plato and Aristotle of Valpolicella." Regarding New Zealand sauvignon blanc, he writes, "It was as though the Kiwis figured out how to bottle Kiri Te Kanawa's voice."

He offers these wine metaphors in "Un-Corked," his monthly column in House & Garden magazine. It is a cleansing read, filled with sly irony and rich with analogies, similes, and metaphors. It is also distinctly unsnobby.

His newest book, A Hedonist in the Cellar: Adventures in Wine, is mostly a collection of his work in House & Garden. Each essay runs about a thousand words, covering a wine area or a wine character. Throughout, he casts off elegant similes the way John Lennon used to spin gorgeous melodies. Like: "Wine is as serious or as frivolous as we choose to make it. Like sex, it has far too often been shrouded in mystery, hemmed in by taboo, obfuscated by technical blather, and assailed by puritans, although its enjoyment is, or should be, simple, accessible, and entertaining."

McInerney studied with one of the best, Raymond Carver, and, as when digging through the Miles Davis canon you can find a little Louis Armstrong, when reading McInerney, a little Carver bubbles now and then. Carver described his writing style as "inclined toward brevity and intensity," which is what McInerney delivers. Over his brief chapters, he gives people and places life. What makes him better than a mere wordsmith is his ability to let a concept breathe and then to finish it with the entire idea distilled into a sentence or two. Here's McInerney writing about why he likes hanging around wine people: "Wine people as a rule are gregarious, generous, and passionate. The cult of Bacchus doesn't include many anal-retentive personalities."

Of course, the primary goal of a wine book is to impart accurate knowledge about wine. Here, McInerney is a faultless guide. Whether rhapsodizing about the gorgeous white wines of Alsace and the Rhone, or telling about obscure areas like Sagrantino di Montefalco or Cahors, he's spot-on in his recommendations. My only quibble is that he frequently writes about wines that are expensive and hard to come by.

A Hedonist in the Cellar is both a great read and a source of accurate information. Highly recommended.

Jay McInerney, A Hedonist in the Cellar, Texas Book Festival