Dishes From the Wild Horse Desert

The origins of American regional cuisines – their ethnic influences, native ingredients, and authentic recipes – are currently a hot culinary topic. Texas has bragging rights to at least two established regional cuisines: our distinctive brand of barbecue as well as the dishes that evolved from our Tejano heritage, known as Tex-Mex. Perhaps there is no Texan better qualified to discuss our Tex-Mex culinary roots than South Texas rancher and food writer Melissa Guerra. After all, Guerra's ancestors have been ranching in South Texas for eight generations (since 1791), and her family tree boasts such illustrious names as Gomez, Balli, and McAllen. Dishes From the Wild Horse Desert is her second book. It delivers an informative compendium of authentic recipes complemented by historical anecdotes and evocative sepia-toned Ignacio Urquiza photographs that depict the desert ranchland of South Texas in all its ferocious beauty. 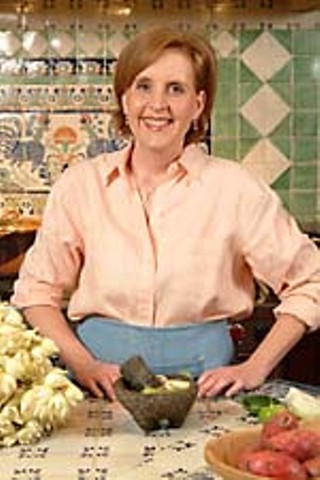 In a recent conversation, Guerra told me her publisher rejected the manuscript's first title, "The Origins of Tex-Mex Cuisine," because they were concerned the term "Tex-Mex" might still have negative culinary connotations. Hence the book gets its lyrical title from an apt description of the once-disputed Nueces Strip, the rugged desert area from the Nueces River south to the Rio Grande. Regardless of the title, Guerra's recipes are the genuine Tex-Mex article. Sample her picadillo, enchiladas norteñas, pan de campo, pork carnitas, mesquite-grilled fajitas, or barbacoa, and you'll recognize the flavors of traditional Tex-Mex dishes.

Guerra's recipes are rich with ingredients that represent the area: beef, pork, game, Gulf fish, cactus, chiles, cilantro, epazote, mesquite wood. She also shares dishes that reflect the culinary contributions of the Spanish, Scotch-Irish, German, and Polish immigrant settlers that helped to tame the fearsome desert and make it their home. Dishes From the Wild Horse Desert offers as complete and balanced a representation of the origins of Tex-Mex cuisine as you are likely to find. And despite what an East Coast publisher might think, it's a book any Tex-Mex food lover would own or give with pride.

In addition to raising three sons on the San Vicente Ranch with her husband, Enrique "Kiko" Guerra, Melissa is a very busy culinary entrepreneur. A few years back, she self-published Texas Provincial Kitchen and created a successful PBS cooking series based on that book. Because of the knowledge and expertise demonstrated in that endeavor, PBS producers hired Guerra as a consultant to train the participants in the 2006 Texas Ranch House series. (She aptly describes the unfortunate performance of the ranch women on that show as "a missed opportunity for greatness.")

This fall, she's on the road promoting her new cookbook with demonstrations at the Texas Book Festival and a teaching schedule that includes appearances at all the Central Market stores statewide. She'll get home from her book tour just in time to oversee the busy holiday season for her catalog business, Melissa Guerra: Cocina, Casa & Comida (877/875-2665, www.melissaguerra.com), an incredibly well-stocked catalog filled with imported Mexican ingredients, foodstuffs, cookware, kitchen tools, and pottery. She'll also check in on her newest venture, Taco Meli, a traditional taco shack selling tacos stuffed with roasted meats, in nearby Edinburgh. If all is going well, she plans to replicate the humble little restaurant in other towns around South Texas.

Melissa Guerra will be in the Texas Book Festival Cooking Tent on Sunday, Oct. 29, 3:30pm.