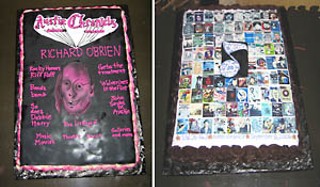 You know this town is in full football-fever mode when even Mangia pizzas can be purchased in the shape of a football for your tailgating pleasure! Yep, those wacky Mangia guys searched the world over for a football-shaped pizza pan, and now pizza lovers can order an award-winning stuffed pie shaped like a football and garnished with the name of their favorite team or player. The football pizzas will feed the same number of people as a large stuffed Mangia pie and are the same price. They're available at any of the six outlets around town (www.mangiapizza.com). And, in case you missed it, right in the middle of all the pregame hoopla surrounding the Ohio State showdown last week, a very cool Mangia pizza bearing the traditional hook 'em was featured during a 15-minute segment on ESPN's Cold Pizza morning show. The Mangia guys had fed an ESPN crew when they were in town last year for a live broadcast of the Texas Tech game. When the producers heard about the new football-shaped pizzas, they ordered up a batch and featured them prominently on the show. That's a play of the week for sure... Conventional wisdom says that the beginning of an eagerly anticipated football season is the perfect time to open a new restaurant in Austin. We couldn't help but notice that two new places Downtown were promoting themselves as the place to be on game day last week. The owners of Champions Restaurant & Sports Bar (300 E. Fourth, 473-0450) in the new Marriott hotel development at Fourth and Trinity hope to make it Downtown's most popular sports-watching destination. The interior is decorated with the museum-quality sports memorabilia of Texas legends such as Vince Young, Earl Campbell, Cat Osterman, and Lance Armstrong plus photo murals, pennants, and banners of Texas professional sports teams. The comfortable, clubby interior offers a relaxing place to watch big games, and there is also a patio where it's possible to enjoy contests in misted comfort. Look for a full bar with 16 draft beers and a menu offering everything from hearty Big Tex burgers to Frito pie or a pan-seared salmon BLT salad. Champions should be easy to find: The city's only outdoor ticker tape is wrapped around the building, continuously offering sports scores, menu specials, and daily events... The other new spot eager to accept your game-day dollars is the Belmont (305 W. Sixth, 457-0300), brought to you by Matt Luckie and Daryl Kunik, partners behind several of the city's hottest clubs and restaurants. They hired Michael Hsu and Joel Mozersky to re-imagine the late Fifties Harrison-Pearson building, and Austin's most in-demand design team has created a space that evokes the hipster glamour of a swanky Rat Pack-era supper club. In hopes that the food is every bit as memorable as the design, the partners hired Executive Chef Benjamin Nathan to create lunch, dinner, and late-night menus with innovative renditions of classic American favorites. Drop around for a signature Belmontini before or after the game, and see for yourself.

Happy 25th Anniversary to Us!

When it came time to think about cakes for the Chronicle's 25th anniversary party, I realized I needed to call on bakers with commercial facilities and much more sophisticated cake decorating skills than mine. Luckily, chef instructor Aimee Olson, director of the Baking and Pastry program at the Texas Culinary Academy (11400 Burnet Rd., 837-2665; www.txca.edu), offered to help me out. The two giant cakes from TCA were the hit of the evening during our party at Copa: delicious, imaginative, excellent works of culinary art. They were wonderful. Thanks so much.
More Food-o-File columns