Tweet
print
write a letter
The salsas were hot, but the blast furnace of August was hotter. Still hot-sauce-loving crowds filled Waterloo Park, and once again, decisions have been rendered. Reviewing the results, we can detect a subtle shift in the competitive landscape. Among the commercial bottlers promoting their wares in the People's Choice voting, fresh preparations do seem to attract more votes than jarred items, with the winners from recent years past reshuffling among first, second, and third places. The addition of pico de gallo as a potential entry encouraged more individuals and restaurants to compete with a fresh-chopped creation and broadened the list of new winners. Now that longtime powerhouse Trudy's appears to have retired from competition after 14 years of domination, we're seeing new repeat winners emerge in the restaurant category: El Caribe Mexican Restaurant (5601 N. Lamar, 452-6207) took home prizes in 2003 and 2005 and came on strong again this year; El Rincon of Pflugerville (200 E. Pecan, 512/990-0250) showed well in 2002 and 2004 and has done so again. We also noticed that tiny El Chilito (2209 Manor Rd., 382-3797) competed in place of older sibling El Chile Cafe y Cantina with a fresh version of the red salsa you'll soon be able to purchase in jars at stores around town. Perhaps the most interesting result in the restaurant category is that two new out-of-town chain operations that have settled in Downtown took home first-place trophies in their first year of competition: Congratulations to Cantina Laredo (201 W. Third, 542-9670) and Rio Grande Mexican Restaurant (301 San Jacinto, 476-8300).

Our partners at the Capital Area Food Bank shared these important results based on participation at the Hot Sauce Festival. What a good day's work. Thanks! 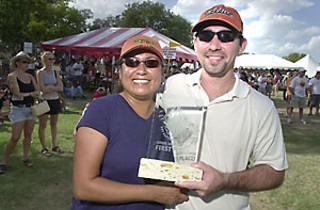 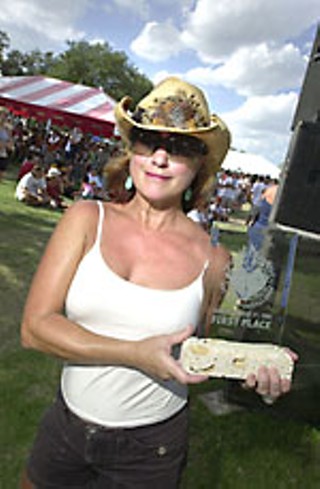 (every company listed is a previous winner)