Presented by the Capital Area Food Bank of Texas

Proceeds from the daylong raffle to benefit the Capital Area Food Bank of Texas. Free parking available in Capitol visitors parking garage and garage F. Capital Metro has more than a dozen ways to get you to the Hot Sauce Festival. After all the sauce and sun, Capital Metro is a great way to chill out and make it home safely. Routes 7/27, 10/20, and 15/16 will drop you off within a block of the park. No dogs. No coolers. No chairs. Featuring Emcee for Life, KGSR's Bryan Beck & live music on the Planet K Stage from:

The Austin Chronicle Hot Sauce Festival requests that you pay an admission fee in the form of two nonperishable food items to be donated to the Capital Area Food Bank. Collection sites will be set up at entrances to Waterloo Park. 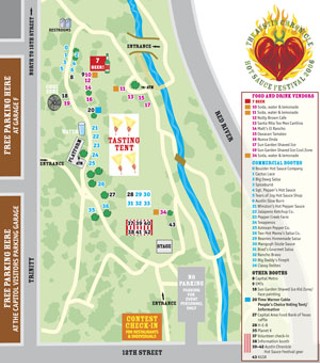 At the heart of the Austin Chronicle Hot Sauce Festival is the contest itself. The blind tasting competition for individuals and restaurants is conducted by some of the top chefs in the state of Texas. They take hot sauce seriously and so do most of the people who enter. Several previous winners in the individual category have gone on to start their own hot-sauce companies.

The contest has three levels of competition: individuals (homemade), restaurants, and commercial bottlers. This gives us a good chance to recognize homemade salsas in a class by themselves. It also gives us a chance to consider salsas made fresh daily in restaurants apart from those made for grocery store shelves. The three categories of hot sauce for each level are designed to leave enough room for a wide variety of styles. In the past, special variety sauces have included fruit salsas, dried-pepper salsas, and even a purple sauce.

You can still enter by bringing a quart of your best salsa to the check-in area in Waterloo Park between 10:30 and 11:30am on Sunday. See the entry form on the cover of this supplement.

Salsas are available for tasting by the public at the designated tasting tent in the middle of the Waterloo Park grounds (marked by triangular dipping chips on the map).

For this part of the contest, our judges pick the winners in each of the following categories:

Commercial salsas are not included in the rest of the tasting but are available at separate booths around the park (marked by green numbers on the map).

The public is invited to vote in the commercial categories:

Time Warner Cable's People's Choice voting for the Best Commercial Bottler Sauces will take place under the balloting tent by the Cool Zone (the blue flag on the map).

Want to vote while you're in line tasting your favorite hot sauces? Here's how:

Use your cell phone or laptop to vote for your favorite commercial bottler sauce while you're at Waterloo Park!

Vote for your favorites by 4pm. Winners will be announced at 5pm.

Children's entertainment provided by Art for Your Head – face painting and more!

Chips for the tasting tent are donated by H-E-B.

Cold water, soda, lemonade, and beer will be available to cool off overheated palates.

ALL proceeds help to feed our hungry friends and neighbors throughout Central Texas!