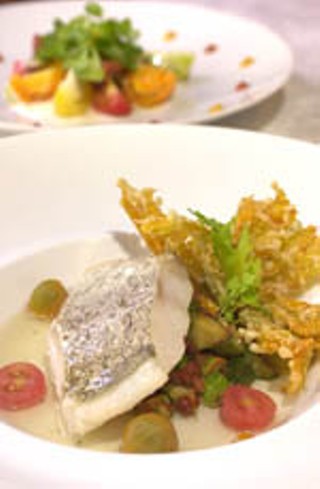 For all of Texas' braggin' rights – our size, our economy, our Iron Bluebonnets, our football, our mythology – we still tend to determine our level of sophistication using a measuring stick created in lands to our east. And sometimes we can't even get hold of that ruler! It wasn't until 2006, for cryin' out loud, that Zagat released its first Texas restaurant guide, despite the fact that Texans in Austin, Dallas/Fort Worth, and Houston dine out more frequently than denizens of every other major U.S. city. Survey?! We don't need no stinkin' survey! We got Enchanted Rock, Lady Bird, the Longhorns, and the Driskill Grill. Get a load at any of these, and anyone will understand how we came by the expression "It ain't braggin' if it's true" naturally. We "got a load" of the Driskill Grill again recently and were so plum pleased with our dining experiences that we'd proudly share the place with the most demanding Manhattanite (and have).

As if you didn't know, the Grill is housed in that grande dame of Austin hotels: the Driskill. Entering the lobby is a complete, barrel-chested Texas experience with its elaborately detailed pressed-tin roof, ornate Tiffany-inspired chandeliers, sumptuous leather sofas, and oversized Western bronze sculptures. No Zen-like, minimalist-chic decor here. It's in-your-face voluptuousness that all but screams, "We got money, honey!" In such surroundings, the snob might suspect it's all hat and no cattle. Wrong: From the genuinely friendly and exactingly professional service to the lavender-and-chocolate truffles, the meal was grand and sophisticated.

Amid heavy linens and white roses, we were directed to our table by the proper hostess, who left us in the hands of our capable waitperson, Amanda. We came by the knowledge of her name not by an overly familiar introduction of "My name is Amanda, and I'll be your waitress this evening," but by her name on our bill. Her name is worth mentioning both for the exacting service she delivered and the fact that she's a she. There's many a fine dining establishment that still employs the paternal practice of only hiring males on the floor. The Driskill Grill progressively employs legions of servers, male and female, and diners are rewarded with service that is at once professional and approachable.

No one could claim that dining at the Grill is economical, but it is entirely fair to say that it's a value. The pricing is mercifully simple, too: $65/person for three courses. Six-course tasting menus are available for $95/person, sans vin; or $125 with paired wine included. What a relief to be freed from wondering, "Should I order the lamb, or will I appear overly extravagant? Does the choice of ribs seem miserly?" Our table opted for the three-course dinner and went all over the menu with abandon.

Considering the extensive wine list provided, we decided to forgo cocktails and forged ahead through the choices among the pricey but delectable offerings. We narrowed our wine options to three and, at our server's suggestion, settled on one after those of us of age selected our meals. Having decided on beef and lamb, we went with the Beaulieu Vineyard Georges de Latour Private Reserve Cabernet Sauvignon 2002 ($86). It was a fantastic choice that only improved as the meal progressed and the wine breathed.

Before any of the first courses arrived, we were treated to three different amuses-bouches that set the tone for the evening. The tomato fanatic in the group was coincidentally presented with a tomato sorbet-enhanced creation; our 13-year-old goat-cheese nut received a grape-and-goat-cheese treat; and the heat fiend received a pepper mousse with the tartest and tiniest "salad" of bitter greens beside. Each of these Lilliputian delights were gorgeously presented and just enough to whet the appetite.

For our meals, the elder in our party decided on Heirloom Tomato Salad, Smoked Quail, and Charred Beef Tenderloin. Our youngest dining companion chose the Texas Chop Salad, Duck Confit Ravioli, and Baked Alaksan Halibut. We whose ages are somewhere in the middle opted for Spinach-and-Fig Salad, Pistachio-Crusted Sea Scallop, and Rack of Lamb.

Not only is the food moan-inducing, it's precisely portioned to allow full partaking. The tomato salad consisted of perhaps six tomato wedges, the spinach-fig dish included one sliced fig and a petite brush-top of little spinach leaves, and the chop salad, the heartiest of the three, came in a ramekin-sized portion of chopped bacon, avocado, bleu cheese, and plantains. At first glance, these portions might appear skimpy, but in fact the meal is perfectly choreographed to awake and induce the appetite and allow for the entire meal to be consumed without that feeling of overindulging to bursting.

The second course proved as satisfying as the first. The duck ravioli was rich with succulent meat, and the quail superb, with gently smoked meat encased by a crispy skin and accompanied by a cool tequila-spiked granita. One spectacular scallop, encrusted with finely crushed pistachio, provided the centerpiece of a dish that also included a fluffy scallop quenelle and chanterelle mushrooms. Our server took care to familiarize us with our selections as they arrived, answering questions and repeating information with an enthusiasm that betrayed her appreciation of the food.

The climax of the meal was achieved spectacularly when the fish, lamb, and beef arrived. Each plate is artfully but unpretentiously presented with a swipe of brown butter, a swirl of truffled potato purée, and a jaunty pane of Parmesan cracker tucked in porcini risotto. The tenderloin was a wonder of beefy flavor that often eludes this cut, encased in a charred crust that yielded a perfectly medium-rare interior. Equally delectable were the full-flavored lamb chops, offset brilliantly with a herby broth and two crispy-sweet garlic chips. Sweetly fresh halibut was simply and perfectly baked and set atop haricots verts that were mercifully cooked, not just blanched, releasing their full flavor. Contrasting tastes played off each other brilliantly without ever obscuring one another. By this time in the meal, the full essence of the wine had been released, and its richness paired ideally with the meat.

Though each of us cleaned our plates, we had just enough appetite left to sample the dessert offerings of pastry chef A. Mark Chapman. Among the three of us, we sampled the Vanilla Panna Cotta With Peach Soup ($9), Toasted Hazelnut Crème Brûlée ($7), and an elegant Opera Cake ($9). The simplicity of the panna cotta choice was highlighted by the supersnazzy presentation in a winged bowl of oversized proportions. Crackling under its caramelized crust of sugar, the crème custard had a crisp accompaniment of candied hazelnuts. The Opera Cake absolutely defined opulence.

Confidently at the helm of this impressive operation is executive chef David Bull, whose brilliance has been regularly lauded in these parts. His profile is about to be raised exponentially by his upcoming appearance on Iron Chef America, where he, sous chef Jason Maddy, chef de cuisine Josh Watkins take on Bobby Flay. Their appearance marks the first by Texas chefs and represents evidence of the Driskill's sophistication with a measuring stick recognized by millions! Bull follows up this appearance with the creation of Heat, an Austin-based reality food show that he's producing and hoping that KLRU will pick up. While we wish him well in these showbiz endeavors and applaud the vindication they represent, please, Mr. Bull, remember to dance with who brung ya and keep cooking, too.