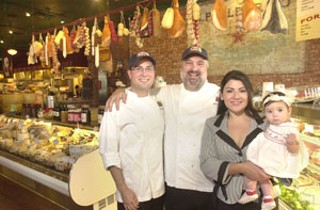 We're the only shoppers in Mandola's at 10:30 on a Wednesday morning, but the place is bustling with activity. A line cook in the open kitchen is singing along lustily as the Commodores blare from the sound system. Energetic young staffers are busy stocking shelves with an impressive assortment of quality imported foods: dried pastas, olive oils (Italian and Spanish), artichoke hearts, canned tomatoes, Spanish canned tuna, grape must, Nutella, and more. Friendly employees stand ready at the deli cases packed with imported meats and cheeses; while we're making our selection from the pastry case, a tray loaded with fragrant rustic breads arrives at the counter, still warm from the oven. We can't resist the warm focaccia and a hearty loaf studded with black olives. A luscious scoop of peach gelato helps pass the time while we wait for our takeout order, and we're on our way just as the daily lunch crowd begins to arrive.

Mandola's opened in March and quickly became one of the busiest lunch spots in the midcity area. It's easy to understand why: The space is attractively appointed, the imported grocery selection is excellent (if a little pricey), the prepared foods are of consistent good quality, and the customer service is friendly and attentive. Combine all of those things with a shady outdoor dining area complete with gurgling fountain, and you've got a bona fide anchor attraction in the new Triangle development. If I lived at the Triangle, I'd probably be in Mandola's every day.

Since Mandola's opened, I've been working my way through the menu offerings and the fresh-baked breads. There are hot and cold sandwiches, small and medium pizzas, a tasty selection of pastas and salads, and a wealth of antipasti in the deli cases. The overall flavor is that of Southern Italy. So far, Mandola's Spaghetti and Meatballs ($10) is my favorite, probably because it comes closest to the hallowed version prepared by the Southern Italian family who lived next door to us when I was a kid: huge, tender, beef-and-pork meatballs, robustly spiced in a savory Sunday meat gravy over al dente pasta. The same meatball shows up in the Italian Burger ($6), where it's flattened on the grill and served up on a sesame-seed bun, dressed with spicy mustard, provolone, lettuce, tomatoes, and great dill-pickle slices. The wonderful sandwich made with Mama's Pot Roast ($7) is stuffed with garlicky sirloin, grilled onions, and a gorgonzola spread. The Mandola's version of Niçoise salad, the Nicosia ($10), offers good canned tuna and crunchy vegetables; the Bresaola ($9) salad with air-dried beef, artichoke hearts, and shaved Parmesan is particularly good, as well. The pasta entrées and salads all come with slices of the excellent house focaccia. I'm also partial to the rustic sourdough, sun-dried tomato and mozzarella bread (great with salads and as croutons), and the olive loaf. Be sure to grab one of the cream puffs or elegant jeweled tarts from the pastry case, and don't miss the gelatos and sorbettos. It's all good.

Mandola's is the brainchild of former Houston chef Damian Mandola and his wife, Trina. The scion of one of Houston's most respected food-industry families, Damian Mandola built a successful culinary empire there, which included partnerships in Damian's Cucina Italiana, the original Carrabba's restaurants, and a popular PBS cooking series (currently in its third season on KLRU) with a set of companion cookbooks written with nephew Johnny Carrabba. Though he maintains an interest in the Carrabba's regional chain of restaurants, Damian sold his Houston holdings three years ago, and the newlyweds relocated to a large property in Driftwood, just southwest of Austin. They've built a house for their growing young family, planted a vineyard, and built a winery. Mandola Wines bottles their first vintage this month, and the winery is set to open in the fall. This time next year, the property will include a rustic Tuscan-style restaurant and tasting room. "We're just five minutes from the Salt Lick," Trina explains, "so we're hoping if people would drive there to eat, they would drive a few more miles to eat with us." If they do as well with the restaurant as they've done with Mandola's Market, I know I'll be there.