Only the best ice cream of all time 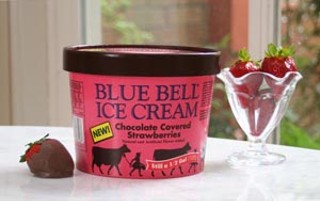 When's the last time you were tempted to plop down and eat a whole half-gallon tub of ice cream at one sitting, one spoonful at a time? Perhaps there was a temporary emotional disorder involved, or your mind was altered in some fashion. Trust me on this: Blue Bell has a new flavor out called Chocolate Covered Strawberries, which requires no outside influence to get you to polish off the whole thing. It's that good. Maybe the best ever created by that little creamery in Brenham.

The new flavor is composed of Blue Bell's luscious vanilla, loaded with rich milk chocolate swirl; chunks of real strawberries; and chocolate candy hearts with strawberry sauce inside. When frozen, it brings on blissful brain freeze, because you can't wait for it to thaw. Slightly softened, it becomes the perfect marriage of choco-strawberry-liciousness. And if you want to take this new taste sensation straight into the stratosphere, just add a drizzle of microwaved El Rey 70% chocolate nibs, and some slices of fresh strawberries (Alpine, if you can find them).

"I can't believe we didn't think of this flavor sooner," says Blue Bell CEO Paul Kruse. Reps from the R&D Department chimed in, "We wanted to capture the flavor of a fresh strawberry dipped in chocolate. The flavor was first suggested several years ago. We have been working on perfecting the recipe since then." They got it perfect.

There is a tease involved though. This flavor is "in rotation," meaning that at the end of July, it's history until next year. There is only one way to stop this madness, and that's "to eat a whole lot of it. If the sales figures reflect overwhelming popularity, we might keep it on permanently." This is an ice cream that deserves to reside in your grocer's freezer year-round. Eat more, and tell everyone you know!

I discovered another new flavor that Blue Bell has recently released: Delta Blues Ice Cream, described as "rich, creamy ice cream blended with sweetened blueberries, baked pie crust pieces, and a blueberry sauce swirl." Believe it or not, they don't sell it here in Austin, the home of Antone's, and the live music capital of the world. We are apparently not bluesy enough for Blue Bell.

Memphis (and points south of there) is the epicenter of Blue Bell's Delta Blues sales, and when asked why it wasn't offered in blues-saturated Austin, of all cities, they replied, "It's a regional thing. It never occurred to us that Austin might be interested."

Austin! Are we going to take this lying down? If any city in the U.S. should have a blues-oriented ice cream, especially one made by Texas' favorite creamery, it's Austin. Get off your duff, and call Blue Bell (979/836-7977) to voice your concerns. Raise hell! We deserve the blues! 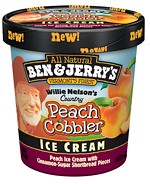