The road to a PBS documentary 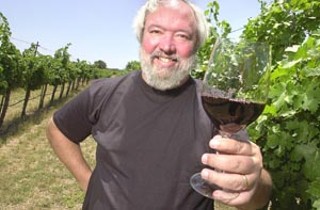 PBS TV shows have a tendency to be so well-done that we seldom stop to think where they came from. Sure, we all know someone had to work on them, but many of them have such a seamless quality that we are liable to just sit back and let the learning flow through us rather than spend any time thinking about their genesis.

That has changed for me. Right at the end of 2002, I was teaching a class on Texas wines at Grape Vine Market. My book, The Wine Roads of Texas (Maverick Publishing, $18.95), was set to come out. Ed Bailey, vice-president of brand development for Austin City Limits, was in the audience. Normally, he's the guy who coordinates and focuses the three main areas of Austin City Limits – the TV show, the festival, and the CD/DVD releases – to try to maximize the impact and value of the brand. But that night, he was there trying to learn some more about wine. "It was all this perfect symmetry," he said. "Because of Larry Peel (KLRU board member and owner of one of the nation's best wine collections), I was introduced to wine and the Texas Hill Country Wine & Food Festival. I was just waking up to the whole Texas wine thing."

At the same time, KLRU producer Tom Spencer had just had a huge success with a documentary titled The Painted Churches of Texas. Bailey explains: "Tom's documentary was touching and moving, and I was sitting there listening to you and hearing these incredible stories about the winemakers and then it all just came together. Doing a documentary on The Wine Roads of Texas just made sense."

At the same time, KLRU was facing federal-funding cuts and had to decide whether to be bold and increase their local productions in search of local underwriting, or follow the path of many PBS stations into a never-ending loop of PBS downloads. The board and station management decided to be bold. So when Bailey discussed the idea with Spencer, everything looked good for a green light from the KLRU management. There was just one problem: money.

PBS stations like KLRU buy programming, like Nova; or, it downloads freebies, like Central Texas Gardener; it will also produce the show itself, as in the case of The Painted Churches of Texas. If the station produces the show itself, contrary to popular belief, they don't just have a pot of gold sitting around that they dip into as needed. The fundraisers that support KLRU, such as pledge drives and the annual Wine & Food Foundation of Texas Auction, go to keep the lights on each day. Special productions have to have additional funding. So, once Spencer and I agreed on going forward, the next step was to get some money. And even after the amazing success and awards Spencer had received for The Painted Churches, his next project – Historic Texas Courthouses – wasn't yet fully funded. Still, we were hoping to get The Wine Roads of Texas funded quickly.

Getting the initial investment is always the biggest problem. Until you have that, there's no answer to potential donors' first question, "Who else has donated?" I'm not as patient as Tom, so what seemed like an eternity to me went by, while Tom continued to feel confident an angel would show up and give us a good kick-start. It turned out to be the incoming president of the Wine & Food Foundation of Texas, Michael Vilim.

"This is the right thing for us to be doing," Vilim says. "We're raising a lot of money through wine at the auction, but most of what we were doing was giving food scholarships. We couldn't give a wine scholarship, because the money would have to go outside the state. Second, we are the Wine & Food Foundation of Texas, and we wanted to do something to tell people about the new generation of Texas winemakers and grape growers. KLRU is a partner of ours, so it just seemed to me to be a fit in so many ways."

Vilim's board said he couldn't touch the money they had already raised, but he could set about raising money on his own. He eventually raised $25,000. Suddenly, our production had some credibility and a partner. But it was only about 20% of the money needed. Other, smaller donors started showing up, but we needed another angel. That turned out to be Susan Auler, another board member of the Wine & Food Foundation of Texas and owner with her husband Ed of Fall Creek Vineyards.

Susan has a reputation for getting things done. She is one of the founders of the Hill Country Wine & Food Festival and has a résumé an inch thick filled with charitable work. She started by putting on a festival in Horseshoe Bay that raised $20,000. Then, she worked with Kristy Ozmun, a PR person who has close ties with HEB and Central Market, to get the two HEB decision-makers – Cory Basso and David Duran – sold on being the major supporters of the project. Both Susan and Kristy were gentle but unrelenting until they got what they wanted – a $60,000 grant from HEB. Susan is thrilled: "Ed and I have worked for 31 years to help renew the Texas wine industry, and we believe this film project is going to be the catalyst to make everyone aware of all the wonderful Texas wines."

Susan Auler also helped convince the Texas Agriculture Department to take part, another major step to provide credibility to the production. Agriculture Commissioner Susan Combs is enthusiastic about Texas wine. In fact, she's a grape-grower herself. "The Texas wine industry is a dynamic, growing industry moving from its frontier roots to a refined, vibrant economic powerhouse," she says. Combs hopes that when people see the documentary, they will be encouraged to visit the wineries. "Touring the Texas wine country is a must-do experience for both wine lovers and tourists alike," Combs says. "You get a firsthand look at the care that goes into raising and harvesting grapes and the precision that it takes to make that perfect vintage. And with wineries located across the state, visitors can learn what makes each region unique and each Texas wine an exceptional taste experience."

Of course, what makes the experience come alive on TV is the creative team. Spencer, a 24-year veteran at KLRU, not only hosts Austin Now and The Central Texas Gardener, he has produced documentaries on the culture and architecture of the Texas-Mexico border, about the cultural history of Austin, on James Michener's collection of 20th-century art, and the Painted Churches and Court House series. The Painted Churches was honored by the National Educational Telecommunications Association as the "Historical Documentary of the Year" in 2001.

Tom was drawn to the story because he knew it would make great visual storytelling. "Great people, passionate stories. I like to do TV that gets people to go to the places we portray," he explains. "In fact, after doing the Painted Churches, they had to build a hotel in Shulunberg, Texas, because of all the tourists we added to the economy. Plus, I knew great wine is being produced and it is still a secret."

The person out doing the brunt of the work is Dutch Rall, an artist with an Emmy under his belt. Not only is he an exceptional videographer (Susan Auler says, "After we had seen these places around our vineyard for years and years, when Dutch would show us his film and it would be like we were seeing it fresh, for the first time in our lives. He's just so talented") but he has a brilliant CD out titled 12 Past Midnight, which demonstrates smart antecedents like Blue Nile and Jeff Buckley.

Having people like Rall around is getting Spencer excited, even after 24 years. "Dutch is one of the best videographers I've come across, as well as a great editor and producer. He's a great example of the type of young talent we're attracting because of all the work we have available."

The Wine Roads of Texas will be shown in three episodes in the spring of 2007. Most of the first has been shot, and Spencer believes the interviews have been exceptional. "We've found great storytellers who are making great wine," he says. "Plus, the locations are just gorgeous and the stories are so inspiring."

One other important event has taken place in the time between starting the hunt for money and the first shooting: the widespread availability of high-definition cameras and TVs. The Wine Roads of Texas will be one of the first locally produced documentaries in the PBS system to be shot in high-definition. "The pictures are so beautiful, it's like working in film instead of video," Spencer explains.

You can see how circular the entire process is. The station wants to have local productions because they lead to excitement by funding sources, additional venues for creative work, and opportunities to widely amortize state-of-the-art equipment purchases. And the success of one leads to the break for the next. So that when someone like Bailey has a creative idea about a book like mine, someone with a proven record of accomplishment like Spencer can take the idea and run with it, and community members who have the ability to make funding happen will rally behind it. Which leads to more local productions.

"I just can't wait for this to air because I know people are going to love it," Spencer says. "The public-broadcasting audience is the perfect audience for this show. They are engaged with what they watch, they like to go out and experience things they see, and many of them are already interested in fine wine and fine foods."