Get It All Over Ya: County Line on the Hill Celebrates 30 Years Every region contains a handful of iconic eating spots that somehow manage to embody the spirit of the locale. Through elusive qualities that both elevate and transcend the food itself, these places evoke fond memories of past good times and convey to newcomers an important sense of place and local history. It bears thinking about that in this corner of the universe, such places usually have something to do with barbecue.

In Austin, there's no doubt that the two County Line restaurants – County Line on the Hill and County Line on the Lake – fill the icon bill. Celebrating their respective 30th and 25th birthdays, it seems like these two sister restaurants, famous for barbecue brisket, ribs, sausage, and legendary sides, have been part of the Austin mythic landscape just about forever. And, in terms of their locations and buildings, they almost have.

The County Line founders – Bruce Walcott, Ed Norton, Don "Skeeter" Miller, and Rick Goss – probably weren't thinking about setting up a local institution when they conceived the idea of a casual, inexpensive barbecue joint, but their instincts were impeccable when they chose the site on top of the "third highest hill in Travis County" with 20-mile views and a long history of good times on the edge of the Hill Country. 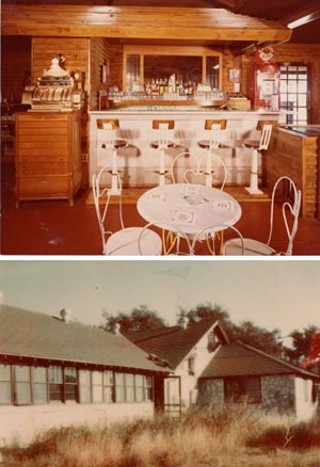 The original hilltop structure was the Moose Head Lodge, a pine-log party house built in 1922 by early West Lake developer Emmett Shelton. Although it quickly became a destination for drinkers of bootleg whiskey made in the surrounding hills, the Moose Head speakeasy closed after only a year and then burned to the ground in 1931. It rose from the ashes in 1934, when local "King of the Gamblers" Mervin Ash built the Cedar Crest Lodge, the stone building that exists today. Based on Ash's vision of a local Las Vegas, the Cedar Crest was a popular destination, serving up food, drink, and gaming until the late Thirties.

Under a series of owners, various incarnations of the Cedar Crest rollicked on through the Fifties, popular with UT fraternities, stag parties, and veterans returning from World War II. It was an unbuttoned, outside-of-town kind of place, offering drinks, snacks, and jukebox dancing until finally closing in 1960. After sitting abandoned for several years, the next use, interestingly enough, was a Sunday school and youth club called the Same Place, sponsored by St. Michael's Episcopal Church.

Bruce Walcott, one of County Line's founders, grew up just a stone's throw from the old lodge and, when it became available in 1974, he and his partners leased the run-down building for $150 a month, buying it six years later. After some rocky beginnings – learning to cook barbecue in situ and writing the menus on Big Chief tablets – the County Line partners got their groove, established a faithful core clientele, and never looked back.

The County Line on the Lake, located off FM 2222 and opened by the partners in 1980, has an equally nostalgic but perhaps less checkered past than its older sibling on the hill. It began in 1940 as a gas station/bait camp run by Dudley and Rosa Lee Prade, serving early Lake Austin habitués. By 1950, the Prades had built the Bull Creek Lodge and fishing cabins, where they provided a boat dock, swimming pool, rental canoes, and family-operated, short-order kitchen. A fire destroyed the original lodge in 1959, and the Prades built an expanded new structure around the remaining fireplace. The Bull Creek Lodge closed for good in 1973, and the location subsequently functioned as several food and music venues until County Line bought it 1980.

As time passed, the pool got filled in, and the funky fishing cabins were taken down, but the essential structure remains pretty much as it was, with the addition of decks and a new kitchen. The decor still reflects the casual, rural, lake-camp atmosphere; diners still come to eat by boat; and kids still feed the turtles, just as they did in the 1950s.

The County Line is now a vast barbecue empire, with locations in several states, 1,200 employees, and a brisk mail-order "Air Ribs" enterprise. They serve an astonishing million ribs a year, along with 400,000 pounds of brisket and 14,000 gallons of signature barbecue sauce. But despite such commercial success, the Austin-area County Lines haven't forgotten or outgrown their local roots. Both continue to celebrate the spirit of an earlier, less cosmopolitan city, when the untamed Hill Country was just out the city's back door.