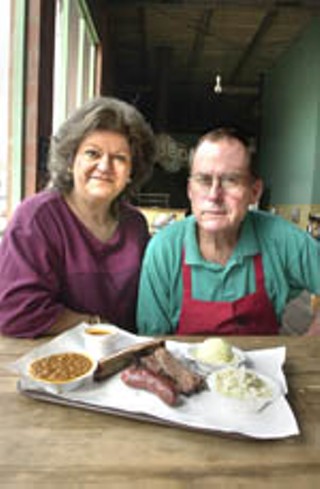 Vencil Mares has been coming into work at the Taylor Cafe every day for almost 60 years. After returning from World War II, Mares, who grew up in Cistern (Fayette County), settled in Taylor and began working at a local meat market. In 1948, he decided to open his own restaurant. The Taylor Cafe has been at that same location on South Main ever since. Tucked under the railroad tracks, the cafe is part beer joint, part barbecue stand, and part local social club. Inside are relics from years of business: old beer signs, farm implements, butchering tools, and a couple of ancient cash registers that would make folks on Antiques Roadshow drool. At 81, Mares is still there every day, watching over the pit, carving up meat, and chatting with his customers. Mares still makes his own sausage, though he admits that now he gets a little help from some of his younger employees. He makes two different types of sausage using the same recipe that he's had since he started. There's a loose-textured beef-and-pork sausage heavily accented by black pepper. It is remarkably lean and flavorful. Mares also makes a milder and even leaner turkey sausage whose texture is smoother but can be a little rubbery. Mares won't be at the festival this year, but the Taylor Cafe is ready for visitors seven days a week. Louie Mueller Barbeque

Monday-Saturday, 10am-6pm (on Saturdays, go before 2pm, because they close when they run out of food)

www.louiemuellerbarbeque.com Long a destination for barbecue acolytes, Louis Mueller BarbequeÊhas become something of a Saturday-afternoon rite. The old-fashioned screen doors open onto a world that seems to have stopped in 1960. A path worn into the wooden floor attests to the steady tread of customers; huge fans dangle from a pressed-tin ceiling, the walls are darkened with woodsmoke, and a trio of pit bosses stand at the ready to carve meat and throw it down on butcher paper, dressing it up with a bowl of baked beans and Big Red. On Saturday afternoons, the line of worshippers spills out the door, all of them patiently awaiting a sample of Mueller's divine pepper-rubbed brisket, smoky beef ribs, or spicy homemade sausage. Like most great barbecue joints, this family-owned business has made its own sausage here for almost 40 years. Bite into this coarse-textured sausage, and juice immediately spills onto the table (or whatever happens to be in the line of fire). The taste is assertive and buttery all at once. Mueller's now makes three superb varieties of all-beef sausage – regular, chipotle, and jalapeño – each with a slightly different flavor and Scoville rating. Regular is spiced with plenty of black pepper, the chipotle is redolent with sweet yet fiery chiles, while the jalapeño bears the unmistakable tang of pickled peppers. Louie Mueller Barbecue will not be represented at the Texas Barbecue Festival this year, so be sure to plan a trip to Taylor to get some. Rudy Mikeska's

www.mikeska.com The Mikeska name is arguably one of the most widely known among lovers of Central Texas barbecue. Starting with John Mikeska, who organized a beef club during the 1920s, three generations of the Mikeska family have been peddling meat from various stores throughout the state. As John's children grew, each of them entered the food business. Son Mike operated a barbecue restaurant in Smithville, Jerry in Columbus, Louis and Clem in Temple, and Maurice in El Campo. Each of the three Mikeska daughters opened restaurants, as well. In Taylor, John's third son, Rudy, parlayed his experience managing the catering operations of the Taylor Country Club into a successful barbecue business known as Rudy Mikeska's. Today, the business is run by his son Rudy "Tim" Jr., who has elevated the operation beyond the small-town meat stand, catering events in honor of U.S. presidents, Texas governors, English royalty, Hollywood actors, and country music stars. Tim Mikeska has personally served barbecue to peacekeepers in Bosnia and has appeared on the Food Network.

Until recently, Tim Mikeska made the sausage himself every day using Rudy's spicy sausage recipe. Two kinds of black pepper, red pepper, and salt were added to pork scraps and beef tallow to make the classic Czech-style pork sausage that made Rudy Mikeska's famous. Now, in order to fill the volume demanded by Rudy Mikeska's clients, the restaurant has its own USDA-certified brand that it makes in a processing plant. Owner Tim Mikeska says the only difference is that the cuts of meat are actually better than they used to be (and they no longer use beef tallow). The proof is in the flavor, which is bold and meaty, and in the continued patronage of not just Central Texans, but customers worldwide. Look for Rudy Mikeska's stand at the Texas Barbecue Festival.