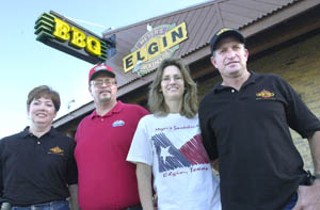 The Meyer family has been making sausage in Texas for more than a century. German immigrant Henry Meyer arrived in Texas in the late 1880s with a few possessions and his family's recipe for sausage, which he taught his son, R.G. Meyer, in the early 1900s. In the 1930s, R.G. and his wife settled in Elgin, where they bought the Rock Front Grocery on Main Street. In a little dirt floor smokehouse behind the grocery, R.G. started making and smoking his father's sausage, which he sold at the grocery. Eventually, he started selling his sausages to other grocery stores, and, by 1949, Meyer's Elgin Sausage Co. was born.

After R.G.'s death in 1959, his son Buddy and Buddy's wife, Betty, developed the brand into the bestselling sausage in Texas. When Buddy Meyer died in 1989, Gregg and Gary Meyer, the fourth generation of Meyers, took over the company. In 1998, they introduced new products like summer sausage and beef jerky, and they also decided to open the restaurant.

Today, Meyer's sausages are available in grocery stores across Texas, and it can even be sampled in barbecue restaurants in Colorado, Maine, and Florida. They ship their sausages – and soon brisket – nationwide through their Web site. 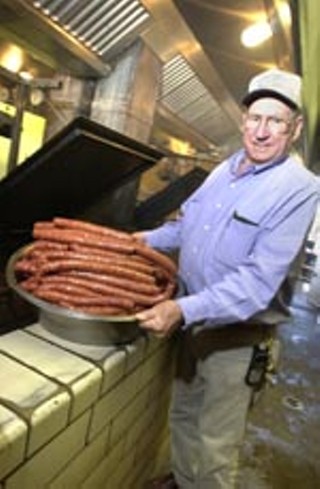 Meyer's Elgin sausages come in six flavors: the original pork sausage, pork and garlic, beef, hot (beef and pork), sage, and the famous "Elgin Hot Gut." The newest flavor is "Tejano," a chorizo-style sausage spiked with jalapeño (yum!). Becky Meyer, wife of Gary Meyer, declares it her new favorite and says it will be available for tasting at their booth at the Texas Barbecue Festival along with their original and the "Elgin Hot Gut." Make sure you drop by and enjoy this Central Texas tradition with a German accent.

Founded in 1882, Southside Market & Barbecue Inc. has remained a mainstay in the Elgin community and a favorite spot of Central Texas barbecue lovers. In 1968, Ernest Bracewell brought his family to Elgin from San Antonio and took over the business, acquiring the sausage recipe from the former owners. Since then, the Bracewells have been making and distributing the famous "Elgin Hot Sausage," an all-beef premium sausage. The recipe has changed over the years, and now the sausage is not very hot, but they kept the trademarked name due to the great popularity of the product. "We use less pepper in the recipe so everyone can enjoy the product, even the children," says Brian Bracewell, grandson of Ernest and the third generation in the family business.

Southside's famous sausage is available in stores and restaurants in Central Texas and even as far away as New York City, Washington, D.C., and Washington state. Last summer, the Bracewells were invited to bring their products to the BBQ Block Party in NYC, with great success. Producing more than 2 million lbs. of sausage per year, the Bracewells keep themselves busy and the people of Central Texas happily eating barbecue all year long.

Carrol Grady and partner Laron Morgan opened Cross Town Bar-B-Q in a tiny, unassuming building by the train tracks in Downtown Elgin back in 1988. I discovered it in the mid-Nineties, when some friends moved their blacksmith business to Elgin and turned us all on to their fabulous down-home smoked meats and the spicy, vinegary sauce that graces every table. To this day, the ribs at Cross Town are still my all-time favorite, no question. A few years ago, the restaurant moved around the corner to a bigger, newer building, but thankfully the barbecue remains the same.

Morgan, who passed away last November, had been in the barbecue business since his high school days in Elgin. It was Morgan who developed the recipe for Cross Town's delicious all-beef sausage and was the master of the smoker. These days, Carrol Grady oversees operations, working hard seven days a week to provide aficionados with some of the best smoked meats around. Grady says that some people think their sausage is too spicy, and some not spicy enough. "I guess it's a matter of their taste," he laughs. Either way, it is a must-try.

Unfortunately, previous commitments will not allow Grady to bring Cross Town's fare to this year's Texas Barbecue Festival, but I made him promise to be there next year. Make sure you stop by when you're in Elgin, though. Cross Town is not on the highway, but it's only a short drive into town and well worth it.