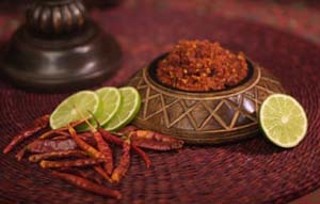 Last year, this down-home purveyor of home-canned pickles, okra, carrots, and other goodies decided to wade into the hot sauce scene and participate in the Hot Sauce Festival. Included in their repertoire is a variety of hot items like Habanero/Garlic Salsa (a winner at the Texas Shoot Out), hot and mild bread-and-butter jalepeños, and other items. They showed up and presented at the festival but missed communication prevented these self-described "square-headed Germans" from appearing at the judging table. This year, they're on for the competition and will enter the aforementioned salsa and jalepeños, plus habenero ketchup (we suspect it lacks "natural mellowing agents"), habenero dill pickles, and a salsa they've christened "Twice as Hot," which is reputed to burn on entry and flame on exit. Ouch!

Hill Country Homestyle Canning is a Fredericksburg husband-and-wife business that began a dozen or so years ago. Keith and Mary Ann Reeh are both of German descent (hence their block heads, otherwise known as stubbornness) and canning has been a way of life for them and their parents, grandparents, and before. In fact, both of their families go back to the founding of Fredericksburg. They're justifiably proud of using farm-fresh ingredients in their products.

Trish Sierer likes to cook. And she's good at it. She and her husband, Brian, also enjoy dinner parties; potluck varieties are a favorite. As a result, Trish often has found herself in other people's kitchens putting her contribution to the feast together. A favorite addition to a number of her dishes is roasted garlic, which she has discovered a lot of people don't stock regularly in their refrigerators. So, she started roasting her own and keeping them handy. Then, one savory day, she had the notion to mix it with sea salt. It made it easy to transport and spread on meats, crostini, whatever, and the flavorful depth of roasted garlic was always at the ready. The heady mixture was a hit, and friends suggested she sell the stuff. That's exactly what she did. The resulting company is Spiceburst Gourmet Spices. The company will be making its first appearance at the Hot Sauce Festival with what is sure to be among the more unique entries: chile/lime saltburst. It's a tangy, slightly sweet mixture of Portuguese sea salt, Arbol peppers, fresh-squeezed lime, and Turbinado sugar. Not for chip dipping, this spice was begat to spice up beer cans, but it'll be available on cucumber rounds at the contest.

The barely 2-year-old company is already branching out: Flavored butters such as chile/lime butter (a natural on corn on the cob) and pomegranate/cinnamon butter (luscious on scones) have just hit the market.

What a long, strange trip it's been for Brian Rush to the Hot Sauce Festival. It began in 1988, when Joy and Jerry Burleson began making O'Shucks Tamales. Joy's son Brian joined the endeavor at the Travis County Farmer's Market on Burnet Road in 1991. The operation moved to the heart of the entertainment district on Sixth in 1994, and the original mass-produced tamale factory plans were scrapped for a restaurant. Natch. One fortuitous day in 1997, they acquired a shelf-full of hot sauce from their friend and former Farmer's Market tenet J.P. Hayes of Sgt. Pepper's. Eight years later, the restaurant is scrubbed, the tamales are a thing of the past, and the hot sauces are on the front burner igniting tongues and flaming passions.

While Tears of Joy has made several previous appearances at the Hot Sauce contest (Brian even judged one year), this year they are submitting two new entries: 6th Street Red and 6th Street Green Salsas. Brian himself is fired up about these salsas. "I've always wanted to have my own line of products. We have a commercial kitchen. I had made fresh salsas for the restaurant [O'Shucks], but this is my first time with cooked [salsa]. It alters the flavor, but you can make up for that by roasting the peppers." He also roasts some of the tomatoes to give depth of flavor to the salsa. For the green salsa, all the tomatillos are roasted. The resulting sauce is a favorite among his customers.