All in the Presentation

John Bullington's and James Holmes' culinary performance art: now showing at an Alamo Drafthouse Theatre (or elsewhere) near you 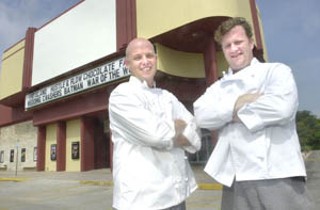 Austin film lovers who packed the Alamo Drafthouse on South Lamar during the opening weekend of Charlie and the Chocolate Factory had no idea the lengths to which the staff had gone to provide them with a unique food and film experience. Chefs John Bullington and James Holmes had designed two menus to complement the film: a Chocolate Feast for special screenings and Violet Beauregard's Chewing Gum Meal available on weekend nights (see menus, p.48). General manager Mike Sherrill raced all over town buying up cases of inexpensive little Carlos V chocolate bars so the staff could unwrap them, rewrap them in a custom Wonka Bar wrapper, and distribute them to every ticket holder. During each showing, one candy bar came complete with a golden ticket good for $50 worth of food and drink at the Alamo. In the opening weeks of the movie, the theatre served three sold-out Chocolate Feasts, hundreds of Chewing Gum Meals, and gave away more than 5,000 chocolate bars.

The freedom to add creative culinary embellishments to the presentation of such films as Charlie and the Chocolate Factory is one of the primary reasons Alamo Drafthouse founders Tim and Karrie League chose to sell their fledgling corporate franchise operation in 2004. "We realized pretty quickly that operating the franchise business was not how we wanted to spend our time, and selling made it possible for us to build the South Lamar theater and focus on what we really like doing," Karrie League explains. What the Leagues enjoy, and excel at, is a combination of eclectic programming and innovative enhancements that include Rolling Roadshows on giant inflatable movie screens; unique film festivals with the likes of Harry Knowles, Quentin Tarantino, and Peter Bogdanovich; films paired with live music and/or comedy routines; and distinctive film and food combinations with custom menus.

As a movie theatre and restaurant hybrid, the regular Drafthouse menu offers burgers, fries, sandwiches, salads, individual pizzas, and desserts. The Leagues had long toyed with the idea of hiring chefs to expand the culinary offerings at the theatres and were finally able to do so at the beginning of this year. "We wanted chefs who could take charge of the busy kitchens and also be excited about the food and film projects," she says. They realized it might be a challenge to find chefs with the creativity to design myriad special film menus as well as the organizational skills to oversee high-volume production kitchens that regularly feed several hundred people every couple of hours. Luckily, they found two eminently qualified men to helm the kitchen operations at the Drafthouse Village and the newly built theatre on South Lamar. 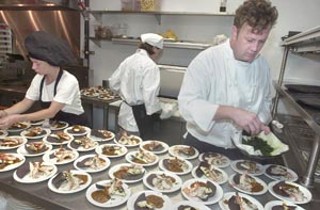 "We had been to Mars and loved the food, so we were glad when John Bullington applied for a job," Karrie recalls. Indeed, Bullington came to the interview brimming with food and film ideas of his own, making it obvious he shared their enthusiasm for the possibilities inherent in their concept. "Ishtar has always been one of my favorite movies, and a friend and I prepared a meal for a special screening of Ishtar at the Alamo Lake Creek in 2004," Bullington says. "The crowd loved it, and I was hooked! I really wanted this job." Likewise, the Leagues recognized chef James Holmes as a kindred spirit when he and a group of students from the Texas Culinary Academy prepared the food to accompany a screening of Peter Greenway's The Cook, The Thief, His Wife, and Her Lover at a Cannibal Film Festival in 2003. "I told them then to keep me in mind if they ever decided to ramp up their food," he says, "and I jumped at the chance to work here when I found out they were hiring."

The way Bullington tells it, his job as chef at the Alamo South Lamar is a "big amplification" of his previous job. "I went from running a fine-dining kitchen with eight employees where 200 covers on a weekend night was a big deal to running two high-volume kitchens with 40 employees where we regularly feed as many as 2,500 to 3,000 people a day on weekends. There was a big learning curve involved," he explains. Still, the self-described film lover is plainly delighted to be right where he is, workload notwithstanding.

"When I interviewed with Tim and Karrie, I told them about this idea I'd had to invite some friends over for a Lord of the Rings marathon with all the Hobbit meals, and now we're doing that very event at the theatre later this month," he says with pride (see menu, p.48). When Bullington isn't generating ideas to augment the Alamo's special film events, he's working with Village chef James Holmes to upgrade the regular Drafthouse menu and develop new desserts and off-menu special dishes to keep the Alamo's legion of regular customers eating and enjoying movies.

Cooking for the theatres is only one component of a Drafthouse chef's job. They are also likely to be called upon to prepare food for the occasional Rolling Roadshow production and serve it in the wilds of nature, which is right up Holmes' alley. Early evening storm clouds threatened the gathering in Old Settlers Park, but by sundown Pong was opening the show, and four inflatable movie screens were ready for the multimedia presentation of the Flaming Lips' Zaireeka. Holmes and Bullington were working furiously in a rented kitchen truck, dishing out pork tenderloin quesadillas, black bean quesadillas, Asian chicken kabobs, vegetable wraps, and fresh fruit to a happy crowd of 500. Holmes was well-suited to this particular blend of food, music, and film, "Several of the guys who work in my kitchen are musicians and one of our guys plays in Pong," he says. "It was great being part of that event."

Though Holmes recently spent two years as a chef instructor at the Texas Culinary Academy, he also developed some serious catering chops working with his buddy Luke Bibby, owner of Out There Catering. "We did events at the Backyard, the Music Hall, all kinds of different venues. You learn to set up and do the job wherever you have to – shucking oysters backstage for Willie Nelson and 100 of his friends, stocking bands tour buses – you name it, we did it," Holmes recalls. That kind of experience comes in handy at events like Zaireeka and sometimes provides the ingenuity necessary to produce special items in a kitchen where the equipment is customized for a specific menu such as the regular Drafthouse fare. "It's amazing what all I can cook in a conveyor pizza oven," he laughs. Holmes expects to spend another six to eight months in the Village kitchen directing his gang of guitar slingers, and then he'll move on to a restaurant of his own, fulfilling a longtime dream. Meanwhile, he'd like to keep his old music business connections alive by planning a Rolling Roadshow food and movie event at Willie Nelson's Western village in Luck, Texas.

While it's safe to say that Bullington and Holmes couldn't have envisioned their current jobs when they began their cooking careers, they are both very comfortable with the culinary performance-art aspect of their unique positions with Austin's homegrown phenomenon, the Alamo Drafthouse. Bullington explains it best. "The first night we did the Chocolate Feast, and they introduced us in the theatre after the movie, you could tell how the food had made the audience feel more a part of the film. I hadn't had a cooking high like that in a very long time!"