Less Louis Prima than the Spins 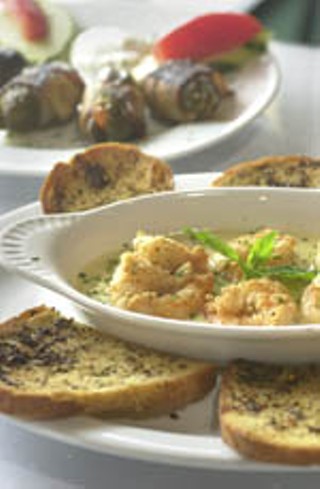 If the cinematic history of Italian restaurants in America is to be believed (and why shouldn't it?!), it includes Mama Mia joints overseen by overweight Neapolitan grandmothers, vaguely mysterious places in New York environs famous for their executions of Mafioso types, and meatball houses whose fare has more in common with Chef Boyardee than any other cook. And perhaps most famously, the uncompromising yet doomed bastion of exquisitely prepared gourmet food. What the movies don't include in their history is theÊmidrange, sophisticated yet robust dining spot. Like Rocco's.

Its second location in town (the original is in Lakeway) is housed in the West Sixth site that previously housed Ninfa's and the Coyote Cafe (both celebrated imports that didn't fly in River City). The current inhabi-tants are the beneficiaries of the extensive modeling and remodeling that went on before their arrival: angular soaring ceilings, tall windows that provide excellent viewing of the extensive foot traffic of the area, and a chic interior fireplace smack-dab in the center of the dining room. A rooftop bar area is in the works, too. What this incarnation added are enormous murals of fun, eclectic, funky, and good-looking people. The super-vibrant colors and sheer size of the murals sets the mood: This is a place where gusto reigns supreme.

The kitchen and staff works hard to spread la dolce vita. Friendly and enthusiastic yet lacking refinement (on both visits there was a hail-fellow-well-met overfamiliarity), the waitstaff nonetheless knows what's what and is quick with knowledgeable recommendations. So, we took them up on the suggestion and began with Bella Baci (Italian kisses, $9.99), a plate of four jalapeños stuffed with large shrimp, wrapped in bacon, and grilled. Like the waitstaff, what it lacked in refinement it made up for in pow – and taste. The dish is served with generous discs of cool cucumber and an equally chilly sour cream dipping sauce. The Tomato Basil Zuppa ($2.99/cup) proved less satisfying: Its sweetness and creaminess reminded us of the ubiquitous cup offered at La Madeleine. The House Salad ($6.99) redeemed that misstep. Spicy pecans, diced Granny Smith apples, and blue cheese crumbles are tossed with mixed greens and a lovely vinaigrette, making it one of the better salads downtown.

For entrées, we tried the Pasta Johnny ($14.99), a decadent dish of fettucine alfredo topped with shrimp sautéed in garlic lemon butter and chardonnay with mushrooms and red peppers. Whew! It's a dish that embodies the lusty, go-for-broke style of Rocco's. Inexcusably rich, it's a dish that has you eating "just one more bite" way past your point of being sufficiently full.

The Shrimp Piazza ($14.99) proved a tad more restrained, although we were surprised by the crisp, fried coating on the shrimp. The description of "shrimp finished in a pernod basil sauce" did nothing to indicate the fresh and briny crustaceans would be fried. Still, it was a lovely and satisfying entrée, and the sauce is rich and deep and worth mopping up with the warm loaf of bread provided.

Desserts are locally farmed out and range from the famously rich Miles of Chocolate to a homemade pistachio ice cream, plus the now requisite tiramisu and cannoli. Despite our resolve, we could only make a stab at the ice cream, which was a respectable finish.

If the next reel of the annals of Italian restaurants in America features stops like Rocco's, the film score won't be the crooning of Louis Prima or a mournful trumpet solo. Something more along the lines of the electronic/pop/rock sound of the Spins would be in keeping with the sensibilities.