Some time ago, a friendly reader e-mailed with the suggestion that we simply must check out the taqueria at the corner of Cesar Chavez and Chalmers 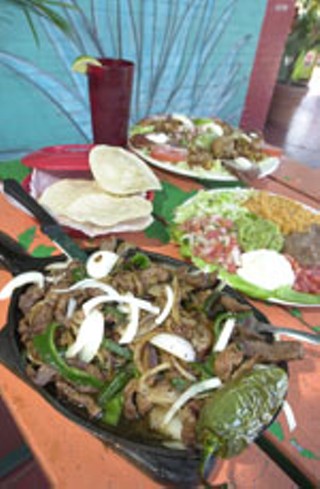 Some time ago, a friendly reader e-mailed with the suggestion that we simply must check out the taqueria at the corner of Cesar Chavez and Chalmers. He raved about the good tacos, some interesting dishes from Mexico's interior, as well as the convenient late-night and early morning hours. It turned out to be a very worthwhile tip, because there's plenty to like at Las Cazuelas. The menu covers lots of territory: There are some pitfalls, but many winners, too. For early risers, they offer a dozen egg dishes, as well as a dizzying array of breakfast tacos at prices ranging from 89 cents to $1.75, depending on your choice of fillings. At lunchtime, they'll also make Tortas ($3.99) or Gorditas ($2.95) with many of the same tasty meat fillings available for tacos, or there are choices of soups, salads, appetizers, Tex-Mex combo platters, and many Mexican entrées (the fish tacos, $7.95, are particularly good). They even offer chicken-fried steak and gravy, hamburgers, and fries, though that's certainly not what I'm looking for in a restaurant with so many other enticing options.

In my first few visits to Las Cazuelas, I mainly stuck to the Mexican dishes that are my favorites, things like Carnitas (shredded pork, $5.95), Carne Guisado (stewed beef, $6.95), and Chile Rellenos (stuffed poblano peppers, $6.95). The carnitas and the guiso both had very good flavor, though the beef in the guiso was a little on the tough side. All the entrée and combo plates come with rice, refried beans, and a chopped salad of lettuce and tomatoes. My first few rellenos here were so wonderful – big, fire-roasted poblano peppers stuffed with tasty beef picadillo, fried in a thin, delicate egg batter and slathered with robust red sauce – that I was inspired to give them a Critics Pick in the 2004 Austin Chronicle Restaurant Poll. Imagine my disappointment when I went back recently and was served a fried poblano filled mainly with the core and seeds of the pepper and a little bland ground beef. I can only hope a lazy cocinero was having an off day and that problem won't be repeated. I'll also steer clear of the watery Tex-Mex-style Chile con Queso ($3.99) and opt instead for Queso Fundido (melted white cheese with either chorizo or strips of poblano, $3.99). There's a full complement of American and imported beers here, as well as wonderful aguas frescas ($1.95), plus both American and Mexican sodas.

A sign advertising "estilo potosino" (in the style of San Luis Potosí) was one of the first things that caught my eye about Las Cazuelas. I was intrigued by the idea that the restaurant might serve some distinctive regional dishes from the state in east central Mexico known for its ghost mining towns and beautiful rebozos (woven shawls). Restaurant owner Juantino Ponce is indeed from San Luis Potosí. When I asked about the dishes at Las Cazuelas that specifically represent his homeland, Ponce directed me to the Machacado (dried beef) with eggs ($3.95) and the Nopales (sauteed cactus pads) with eggs ($2.99) from the breakfast offerings; the Cecina (air-dried beef steaks) with nopalitos ($8.95) from the grilled meat section; and Enchiladas Potosinas ($5.95) (corn tortillas topped with chorizo, potatoes, and grated dry cheese) from the enchilada portion of the menu. I can't wait to get back and try them out.