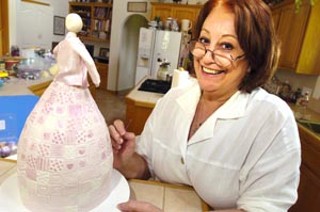 The women gathered around the classroom table at the All in One Bake Shop are busy admiring one another's portfolios. They are all members of the Capital Confectioners and are eagerly anticipating the 2005 Cake and Sugar Art Show and Competition to be sponsored by their organization this weekend at the Texas Culinary Academy. The show gives Austin-area professional and passionately amateur cake decorators a chance to strut their stuff to one another and the public at large. These five women represent the diverse 70-plus members of the Capital Confectioners, many of whom meet monthly at the All in One Bake Shop to hear guest speakers or instructors and share stories and ideas. Though some of them do get paid for their cakes, we heard some version of the same story from each woman: They'd all decorate cakes for the sheer enjoyment of it – whether there was money involved or not – the true attitude of an amateur.

When Theresa Pipes studied architecture at UT a few years back, she didn't realize that all of her architectural projects would ultimately be rendered in cake and frosting. After college, Pipes took some Wilton decorating classes (founded by sugar artist Dewey McKinley Wilton in 1929, the Wilton company offers a series devoted to decorating cakes with buttercream and piped flowers, plus a complete line of custom baking pans and other supplies) and showed such a talent for the work that she was recruited to teach the method. These days, she teaches regular classes at the Michaels near the Arboretum, sharing her skills and her enjoyment of the "fun, whimsical aspects of cake decorating with mothers, daughters, kids, and even retirees looking for some place to socialize." Pipes has several entries planned for this weekend, including a wedding cake, a baby shower cake, and a novelty item where the cake resembles sushi. 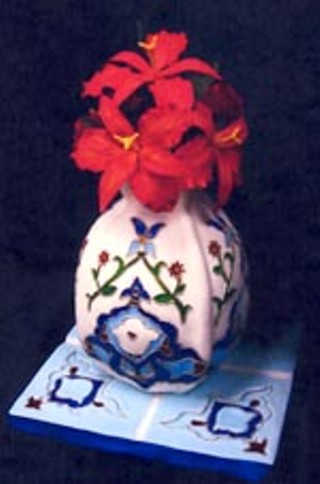 Meanwhile, Melissa Bocanegra credits the TV Food Network for part of her inspiration to become a pastry chef. She began culinary school right out of high school and recently completed the nine-month Baking and Pastry program at Texas Culinary Academy. She's now in the midst of the three-month paid "externship" necessary to complete her degree, decorating cakes at Sam's Club. "Chef Bronwen advised me that working at Sam's or a grocery store would be the best way to learn speed, consistency, and time management, so I'd be able to make a living doing this," Bocanegra explains. While she's efficiently turning out birthday and special-occasion cakes at Sam's, Bocanegra fantasizes about one day having a shop of her own. At this point, she's particularly interested in sculpting cakes and plans to enter both a sculpted and a wedding cake in the upcoming competition.

The way retired flight attendant Yvette Humbert tells it, one visit to the All in One Bake Shop three years ago was all it took to get her hooked on cake decorating. "I discovered this store," she laughs, "and that was it for me." After only one year of instruction and experience, Humbert entered the prestigious Oklahoma State Sugar Art Show in 2003 and won a blue ribbon with a tiered cake replica of the Eiffel Tower, the emblem of her native France. Encouraged by that validation, she now indulges her passion for cakes full time and hopes one day to turn it into a business. "My daughter is a floral designer, and, someday, we'd like to have a shop with her flowers and my cakes," Humbert says. "But that's off somewhere in the future." Just now, she's busy completing entries for every category of this weekend's show. 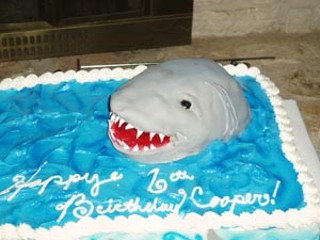 Kathy Galvan was an accomplished home baker who was tired of paying for kids' birthday cakes when she signed up for a Wilton decorating class in 2001. "I came home the night of that first class and told my husband I could tell this was something I was really going to love," Galvan recalls. While she was taking all the classes she could find, Galvan would send the resulting practice cakes to the office with her husband. People were so impressed with the taste and the look of Galvan's cakes, they began to request that she create cakes for every conceivable occasion, and that has become her specialty. These days, the stay-at-home mom teaches Wilton classes with a friend at the Michaels on Brodie Lane and keeps her eye out for a possible retail location. "I really need a commercial kitchen," she says. "My friend and I would love to have a little shop where we could sell cakes and decorated cookies." Check out some great examples of Kathy Galvan's edible artistic creations at www.cakechick.com (in addition to this week's cover), and look for her entries in the special-occasion category at the show. 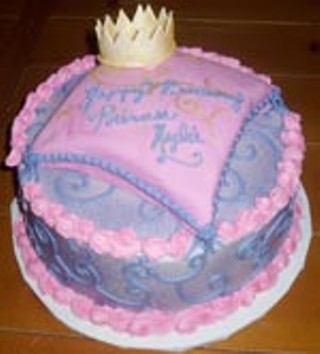 Austin High graduate Rita Anderson was looking for a better summer job when someone suggested she answer an ad for a cake decorator at the big Randalls store in West Lake Hills. "There were seven or eight decorators working there at the time, and those ladies really took me under their wings," she recalls fondly. "They taught me everything they knew." An avid home baker, Anderson considered attending the California Culinary Academy to pursue a career as a pastry chef, but life intervened. "I got a good job leasing apartments with a company that offered plenty of opportunity for advancement, and I met my husband, so my plans changed," she says. She still gets lots of satisfaction from baking, making everything from breads to pastries to pies, her current favorite. "Decorating has become my hobby, and I really enjoy making wedding and special occasion cakes for friends," Anderson says. "It's a good creative outlet for me." She hopes to showcase some of the sugar-art skills she learned in the gum paste classes presented by world-renowned, traveling instructor Nicholas Lodge last year. One of her entries will feature gum paste flowers, and since the flavor of the cake is every bit as important to her as the looks, she's also putting her white cake into the taste competition.

The Decorating and Sugar-Art Boom 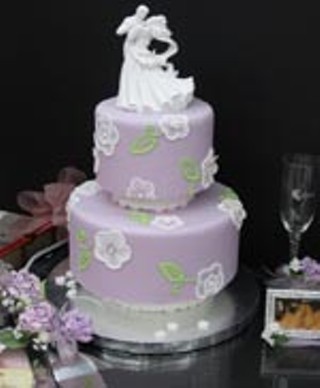 Cake decorating and sugar art are rapidly growing hobbies in the Austin area, as they are across the country. The Wilton method is nothing new. The classes themselves have been around for more than 50 years, first mass-marketed through department store giant J.C. Penney and more recently in partnership with such hobby stores as Michaels and Hobby Lobby. For 36 years, the annual Wilton Yearbook, packed with cake patterns, decorating ideas, how-to instructions, and updates on new tools, pans, and supplies, has been an invaluable resource for hobbyists. However, American Cake Decorating Editor Craig Gustafson credits the International Cake Exploration Societé with sparking some of the tremendous stylistic changes that have occurred in the field.

"When ICES formed in this country nearly 30 years ago," he explains, "they began to promote the more sophisticated and diverse decorating techniques that were already flourishing in England, Australia, Europe, and South Africa." The ICES credo of sharing is accomplished through annual and regional meetings and an informative newsletter circulated to thousands.

Middle America has experienced a real decorating and sugar-art boom in the past 15 years, fueled by many different factors. The influence of Martha Stewart's books, magazines, television shows, and catalogs is readily apparent in all areas of home crafts, and specific trade publications like American Cake Decorating and Mailbox News spread the word about contemporary techniques, tools, and trends to an enthusiastic public. There's also a wealth of information available on the Internet. The publication of lavishly illustrated cookbooks by such celebrity sugar artists as New York's Sylvia Weinstock and Australian native Kerry Vincent have inspired many home bakers. The 11-year-old Oklahoma State Sugar Art Show and other regional shows and competitions offer opportunities for evaluation, learning, and networking in many areas of the country. And last, but certainly not least, the TV Food Network's coverage of everything from glitzy celebrity pastry chef competitions in sugar or chocolate art to features following entrants in the annual Oklahoma show have inspired many decorating dreams. The upshot of all this media exposure is that amateur cake decorators all over America are mastering the art of rolled fondant and elaborate three-dimensional gum paste flowers, techniques that were once the exclusive province of European-trained pastry chefs and a few celebrity sugar artists with exclusive, upscale clientele. It turns out that trying this at home is a very good thing.

This is where the Capital Confectioners Cake and Sugar Art Show and Competition comes in. "We wanted to showcase how talented people in Austin are and raise the bar for everyone at the same time," says chef instructor Aimee Olson, chair of TCA's Baking and Pastry program and one of the event's organizers. In order to ensure the legitimacy of the competition, event organizers have invited "ICES-quality judges and instructors," among them Kerry Vincent, internationally famous co-founder of the Oklahoma show, and Susan O'Boyle Jacobson, a respected instructor and regular contributor to American Cake Decorating magazine. TCA chef instructor Bronwen Weber, who is developing a national reputation as a sugar artist, will also present demonstrations and act as a judge.

The show will feature competitions in several categories for a variety of ages and skill levels, demonstrations of cake mixing and baking, sugar art and chocolate work, plus a vendor trade show. Most of the events are free and open to the public, but there are entry fees for competition cakes, and it's necessary to register and pay for the showcase demonstrations. "This weekend will give Austin-area cake people a great opportunity for education and networking," says Jennifer Bartos, owner of All in One Bake Shop. The day we visited the shop in late May, Bartos said there were already more than 150 cakes entered in the competition, and she expected more entries by the pre-registration deadline of June 1 and a few more at show time. "I'm sure we'll have some people register on site once they see if their cakes turn out the way they'd hoped," Bartos says. While organizers and participants alike would love to see you there, just bear in mind there will be plenty of cake to look at but not a bite to eat.

Information and registration forms at All in One Bake Shop (8566 Research, 371-3401, www.allinonebakeshop.com/clubandevents.asp)