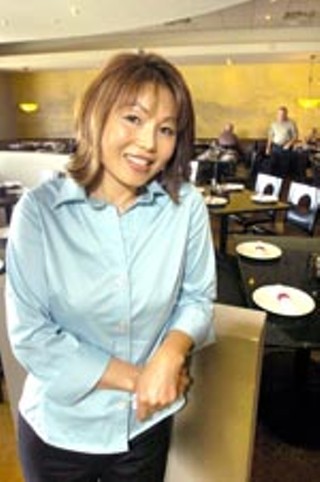 Suzi Yi, mogul-matron of the Suzi's Chinese restaurant empire, is either a very crafty businesswoman or the luckiest lady in Austin. We know she's crafty, but there is probably at least a touch of luck involved, as well. Spunky, effervescent, and blessed with drop-dead good looks, Yi emigrated to the U.S. from South Korea with her parents and siblings in 1977 to join extended family and friends that had already established a foothold here in the States.

She had history with the family's cafe back home, and her first job here was at Taiwan Restaurant on William Cannon at South First. She worked there for eight years, and was the de facto favorite waitress of all of the regulars. We used to eat there regularly (it's still open and still good, by the way), and we'd always make sure we sat in Yi's section. She exhibited an innate ability to lift spirits and make you laugh, knew what you wanted to order before you did, and through the years developed a huge fan base.

One of those regulars was Frank Seely, a local contractor who specialized in restaurant development and construction. "I never had any intention of opening a place," she says, "but it just seemed like Frank and so many others kept bringing it up, so I figured it was supposed to happen. There was an old thrift store on Lamar that was vacant, and when we looked at it, I really started to think that maybe this was meant to be.

"For the first six months, I was there every single hour it was open, seven days a week – meeting all of the customers, making sure everything was perfect. It had to be fresh, and the sauces had to be clean – just the way I like it. It was important for customers to identify me with my place and my food. I needed to know the regulars: If they didn't show up at least once a week, I was going to have to call 911. After six months of constant effort, it turned the corner. We got some good reviews, and I started seeing a steady stream of regular customers."

Those six months turned into years of consistent business and happy diners. Yi was able to bring her siblings into the fold to help her run the place, and she paid off her investors and turned a nice profit. Seely became like an older brother and in 1997 approached Yi with another vacant location: Anderson Lane at Shoal Creek. "I never thought I'd open a second restaurant ... it just fell in my lap," she says. "Somehow, the financing worked out, and it just happened. It was bigger and a little bit nicer, so we were able to add a grill and expand the menu. Business just took off. It was a lot easier the second time. People already knew who I was, I had trained people to help me, we won some Chronicle awards, and we had eight years of history to rely on."

In 2002, her sister in Colorado Springs found a good location and wanted to open her own place. Yi came up with the capital for start-up, and helped her get it open and off the ground. "It's doing good, and my sister is putting out great food. And she's paying me back," Yi laughs.

Last year, Seely found another spot, this time in Rollingwood. "My brother and his wife wanted to run their own place, but after they discovered how hard the restaurant business is, especially while raising two small kids at the same time, they decided to move to Dallas," she says. "I never planned on having three places, well, it's really four, I suppose, but I guess it just happens." When asked if she has any plans for future expansion, she demurs. "I just want to do my best and make all of the restaurants I have even better. Besides," she chuckles, "I've run out of family."

Yi is not married, but admits to dating "a chef. ... No husband, no kids, no tattoos," she says. "My business is my husband."

For insight on how Yi thinks, consider this: Commenting on her menu's moderate price range, and the fact that she had achieved an elegant look at the Shoal Creek restaurant without spending a fortune doing so, she says, "If you spend a million bucks just opening a place you'll fail. You have to keep costs low, quality high, and prices fair. I want to see my customers four times a week instead of once a month." Yi might have good luck, but she's also smart, energetic, and persistent. Restaurant empires don't just happen on their own.