A Loaf of Bread, a Jug of Wine

The simple but elegant art of picnic pairing 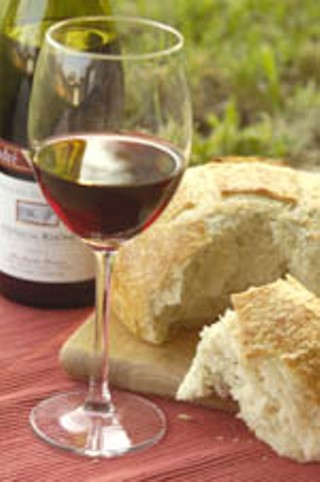 Dining al fresco is almost requisite when it comes to the Fourth of July, and while we're all in favor of barbecues and bandstands, we must admit that in July in these parts, it's a wilting proposition to eat outdoors. But in April (and into May, if we're lucky) the weather is ideal for picnicking.

The acres of undulating hills blanketed with bluebonnets, the tantalizing days when the winds come from the north blowing out the Gulf humidity and leaving in its wake only warm, dry air: These are the hallmarks of a Texas spring that lure us outside. We want to read outside, walk outside, study outside, surf the Internet outside. If we could figure out a way to move our office outside, we'd jump on it. Most of all, we want to dine outside.

But what constitutes the Perfect Picnic? Some sandwiches you throw together or grab and go? An elegant plate of poached salmon accompanied by a fruit and cheese platter? A couple of dogs on a grill? Each of these menus has its charms, but it doesn't get any better than the outdoor dining menu devised by Omar Khayyam in his 12th century The Rubaiyat.

A book of verse beneath the bough,

A loaf of bread, a jug of wine, and thou

Beside me in the wilderness –

And wilderness is paradise, now.

Sounds like paradise to us, too. And so simple it's almost foolproof. Almost. A bag of Mrs. Baird's and a bottle of MD 20/20 won't cut it. When you've stripped the meal down to such basic elements, they better be carefully considered. So, we picked up some flavorful loaves at local bakeries and offered them to area wine experts to suggest suitable partners. We got your loaf and jug covered. The most essential element, the thou, is in thy hands. Or perhaps in the Personals section of this paper. Cheers.

John Roenigk only had to hear the ingredients of the bread before he offered, "The first thing I'm going to say to myself is 'Where do they grow rosemary and olives?' Well, the South of France and Tuscany." A sample of the crusty, dense bread confirmed his suspicions, and he was off. We tasted four selections that Roenigk proposed for the picnic libation to this bread.

The first was an André Brunel, Domaine de L'Enclos Côtes du Rhône 2003, which sells for a mere $9.99 a bottle – a bargain when you're only shelling out a couple of bucks for the bread. It's a good, basic Rhône with 80% Grenache and 20% Syrah grapes and an almost limestoney feeling on the tongue. It struck us as being a liquid relative to the bread and, therefore, a good fit.

Tuscany was next with a Morellino di Scansano Moris 2003 ($13.75). This baby we christened the "most picnicky." It's grapey, fruity, but still dry, and Roenigk decreed that it "does what I want a good Tuscan wine to do."

If your meal is going to be more occasion and less of a romp, give the suave 2001 Chianti Classico Savignola Paolina Fabbri Ludovica a shot ($17.50). It's a complex, grownup wine. You know, like you. Or at least, how you wish to be perceived.

For flat-out romance, we liked the 2000 Vacqueyras Château de Montmirail Cuvée des deux Frères ($17.50). It's just plain sexy. It's created a mere 10 miles or less from Châteauneuf-du-Pape, but those 10 miles save you well over $10 in price.

The sourdough loaf is stuffed with whole- and half-roasted garlic cloves, yielding a subtle, nutty, sweet flavor to the sturdy bread. Jamie Johnson munched thoughtfully on the bread before taking off through the store to come up with some suggestions.

His first offering was what has come to be one of my favorites (and my choice for the Thanksgiving wine), Vieux Clocher Côtes du Rhône. It's a mere $9.99 for a full liter, rather than the traditional 750 milliliters, making it a spectacular bargain. It's a bright wine in color and flavor with a medium body, and it's extremely food-friendly. It's a reliable, friendly workhorse of a wine, and yummy.

From Italy, Johnson offered a bottle that was deemed "best Chianti under $20" by customers over months of tastings, and this was up against wines well over the $20 mark. It's Fattoria di Vetrice Chianti Rufina 2002 ($14.49). "With these wines, you usually either get an earthiness of hay, horses, and barn, or huge blueberry. This one is more balanced." It's very full bodied without the tannins of a Cabernet but with its fullness.

Another Italian option is Musso "Pora" 2000 Barbaresco, at $29.99 one of the least expensive Barbarescos offered. This is a choice wine with oak, cherry, and a slight "dustiness." It benefits from decanting, the air transforming it from a really good wine to a really great wine. So, bring a carafe for some style and function.

Johnson's last choice was one that was familiar to me: Treana California Proprietary Red for $34.29. I remembered a dinner years ago with my sister where we ate garlicky shrimp and pasta and savored this bottle of wine. We talked and talked, laughed and reminisced. And lingered. When I recounted this evening to Jamie, he said, "It was a really great experience, right? That's what a great wine will do." Amen.

One small bite of the herby loaf was all Big Al needed before he knew exactly what he wanted: Russiz Superiore Sauvignon Blanc from the Collio region of Italy ($20). "On first exposure, I wrote down 12 descriptors just from the aromatic. ... Opening the wine and tasting it was like walking through an Italian garden. Tomato, oregano." He was spot on. The wine is incredibly aromatic, almost as herby as the bread. It hits the tongue sharply, then quickly softens. "This wine pairs magically with this bread!" Gilhousen exclaimed, and we had to agree. It was kismet.

Despite this match made in heaven, we pressed him for another option, and he suggested a bubbly. "Picnic. Champagne. Duh." True, true. Gilhousen likes the incredible bargain of the Chierry Massin, an estate-bottled champagne ($25.99). From the more well-known champagnes, he suggested Taittinger for its yeastiness. "It's like driving past the old Mrs. Baird's bakery on Airport when they were baking." All that bread for $31.99.

Any other suggestion? Nope. "That's my story and I'm sticking to it." Fair enough.

"Roasted red pepper reminds me of Italian fare. The rusticity of the bread suggests a ciabatta," mused Devon Broglie as we munched on the loaf. The smoked gouda was barely detectable, so the red pepper was the flavor with which to contend. He made five selections in a variety of price ranges.

First up was the house label, Whole Foods 365 Trackers Crossing, a South Eastern Australian Shiraz ($5.99). Yes, you read that right. It's a plenty drinkable wine, thinnish in color, a bit coarse, with a pucker-up quality on the mouth. It might be a good choice if the company were more numbered than two and economy became an issue. But when you're only shelling out for some bread, you can afford to upgrade.

Which we did, to a lovely La Valentina Montepulciano D'Abruzzo 2002 ($12.99). There's a suppleness to this wine, with velvety smooth tannins, a soft yet spicy character that worked beautifully with the bread. "I think this is my sleeper pick," Broglie said.

Less poetically but more whimsically named is the Goats Do Roam in Villages 2003, a South Africa blend ($12.99). Bang! It's a rustic, tangy, peppery, richly flavored wine that can handle the pepper of the bread.

Domaine des Soulanes "Cuvée Jean Bull," 2003 Côtes du Catalanes ($15.99), is from the Rousillon region in the far South of France. It's fuller bodied, with more mature tannins and more polish. Maybe it's just knowing it's from Catalan, but it seemed to be copacetic with the roasted red pepper.

For just plain deliciousness, the Finca Sandoval 2002 ($24.99) took the honors. Apparently, some of the vines came from pedigreed vines supplied by a Chateauneuf-du-Pape nursery, which accounts for its lusciousness. It's ripe, with fine tannins, full bodied and elegant. And tasty, tasty, tasty.

The Bread: Ham and Provolone Bread from Central Market

"I'm intimately familiar with this bread," Joe Weisenhorn assured me when I offered him a bite. "I have two schools of thought about this: contrast or complement." We started with the contrasting options, which Weisenhorn suggested would cut the richness of the protein-laden bread.

Weisenhorn is high on Carpenè Malvolti Prosecco ($18.99) for its elegance and value. And of course, bubbles are a festive choice for a picnic. "Most proseccos are just fun, but there are more details here" with its acidity and elegance.

The second contrasting selection was a Huia 2004 Sauvignon Blanc from Marlborough, New Zealand ($17.49). Weisenhorn calls it simply a mouthwatering exotic wine with restraint. New Zealand wines are often said to be reminiscent of gooseberries, but a more familiar aroma might be the citrus that comes through.

When it came to complementary selections, Weisenhorn too offered up a Côtes du Rhône. It's no surprise: Dollar for dollar, we think a good Côtes is the most food-friendly wine around. His suggestion was a Cuvée Selectionnes par Kermit Lynch 2003 ($14.99). Sounds all Frenchy until the end, huh? Lynch is a Berkeley, Calif., importer who's been at it for 40 or so years and has been bottling for 15 or more. His Rhône is an unfiltered that has some rusticity but is full of mature flavor.

An accessible, fun suggestion was the Innominato Toscano Sangeovese 2001 (16.99), a fruitier red of Sangiovese, Cabernet Sauvignon, and Merlot. The fruitiness could do well to sweep the oil of the ham and cheese off the palate.

If you're in the mood to pull out the big guns, then Cenay Blue Tooth Vineyard Cabernet Sauvignon 2002 from Napa is the way to go ($31.99). It got its name from the vintner who thinks a good Cab should turn your teeth blue, and this big but balanced wine does the trick. "This is one of my absolute favorite wines in the department," Weisenhorn asserted. "You can spoil yourself without requiring a loan." And since you're not shelling out much for the entrée, you might want to pony up for this special drink.