How much more food and music can you ask for in this town around this time and after? 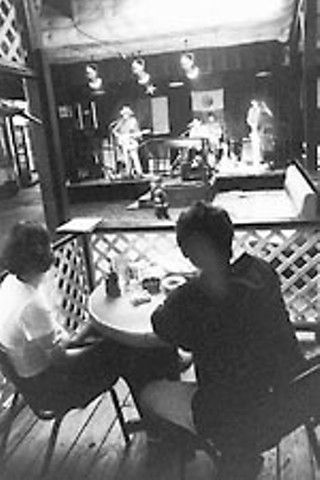 If Austin is trying to keep it weird, El Sol y la Luna is doing its best to keep it real. Authentic and deeply satisfying Interior Latin dishes dot the menu, its location adjacent to the Austin Motel (with its 1930s roots intact) is right out of The Postman Always Rings Twice, and the Friday-night (7:30-9:30pm) gypsy music from Oliver Rajamani finds its source from the original spot: India. Live music wafts from the courtyard on Saturday nights, too, from a rotating cast that is likely to host Patricia Vonne as well as a variety of Latin American artists. And First Thursdays wouldn't be the celebrated party it is without the contribution of music from this location (among others). There is no better caldo de pollo, enchiladas enchipotladas, or queso to be had in the city; no location that more clearly evokes Mexico; and no better place to take in tunes and observe the considerable and watchable foot traffic than from the fragrant patio of this beloved and honored institution. – B.C.

In its colorful upstairs Atrium Lounge, Doña Emilia's serves up a good dose of local Latin music along with some of Austin's best mojitos, caipirinhas, and other tropical cocktails. The room is open and spacious, with an ample central bar and plenty of tables. The surrounding windows let the light in and give the impression of being inside a huge tree house. The atmosphere is lively; sometimes it can actually get loud because of the acoustics of the space. The stage is small, but there is enough room for dancing. The music is generally good, embracing many styles of Latin music, from traditional salsa and son to Brazilian fusion rock and even Spanish flamenco. I like to sit at the bar and snack on their fabulous Picada ($9.95), a meat festival in a basket, comprised of char-grilled bits of beef, chicken, chorizo, and their irresistible chicharr–n, with roasted miniature potatoes and plantain slices. Their caipirinha – the national cocktail of Brazil, made with cachaça and fresh limes – is one of the best in Austin. I also like to drink their signature tropical fruit juices mixed with Tito's vodka for a very refreshing and unique cocktail. Their extensive wine list includes many selections from Chile, Argentina, and Texas. Do–a Emilia's provides live music weekly, Thursday through Saturday, usually starting around 8pm or 9pm and lasting until around midnight. The schedule can be found on their Web site at www.donaemilias.com. – Claudia Alarcón

At the risk of unleashing the wrath of a segment of the Austin population, I will say that Jovita's is definitely not one of the best dining destinations in our city, although I suppose those who like basic Tex-Mex oozing with yellow cheese will find the food to their liking. But what the funky South First eatery lacks in food quality, it makes up in atmosphere when it comes to a live music venue. Most everyone I know has seen live music at Jovita's at least once, and with good reason. The laid-back atmosphere, outdoor patio, and ice-cold beer are South Austin staples relished by long-time residents and new arrivals alike. Many of Austin's favorite bands are among the regular performers who have packed the house at some point in their careers, among them Don Walser, the Gourds, and the Cornell Hurd Band, whose weekly Thursday gig is becoming legendary. These early, nonsmoking shows are popular with families, as well, providing an opportunity to listen to live music without the atmosphere and the late night hours of a nightclub. – C.A.

La Feria is a Tex-Mex spot that draws in a crowd of neighborhood, blue-collar, student, and Latino diners who come for the reliable food in large portions at cheap prices. Of note is the huge range of enchiladas (especially tasty is the chicken with poblano sauce), the queso fundido with chile strips, and the fajitas. The menu has many options for the vegetarians, and lunch specials for little money are a big draw during the week. The bar puts out good drinks (and strong margaritas) at fair prices, and they have a wide range of Mexican beers (happy hour is 5-7pm, Monday-Friday). The salsa could be a little zippier, but the owner Danny couldn't be any more attentive or accommodating. The restaurant is cozy inside, and has a huge covered outdoor patio (temporarily enclosed when it's cold). What packs in the crowds on Wednesday and Thursday nights is the appearance of Mariachi Estrella, one of the area's top mariachi ensembles. The band sets up on the patio and plays from 7-9pm, and the joint gets jumping (sometimes to rather raucous levels) the second they start. If you've never had the opportunity to hear live mariachi done by a band that knows their stuff, then this is a very accessible venue to give it a try, while you scarf up the pleasing Mexican comida and quaff a few ice-cold Negra Modelos or margaritas. It won't break the bank, and you'll have a blast. – M.V.