The Return of the Fajita King

After 35 years, Sonny Falcon is still getting his skirt-steak story straight 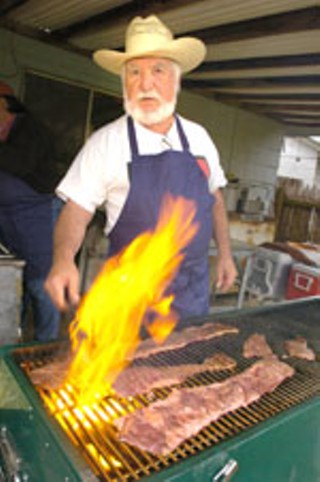 The hair and beard are now snowy white and he's maybe a step slower, but whether he's cooking for a party in a friend's back yard or delighting fellow tailgaters at the College World Series in Omaha, Sonny Falcon is once again very much in his element. Falcon retired from the food business more than a decade ago, but he's in comeback mode today. He and son John catered a Buddy Walk fundraiser back in the fall, and later this spring they'll collaborate on a new Fajita King restaurant in fast-growing Kyle. There couldn't be a more fitting location in which to stage a comeback, since Kyle is where Sonny Falcon began his trek toward fajita royalty 35 years ago.

Juan Antonio "Sonny" Falcon moved to Austin from Mercedes in 1959, and one of his early jobs was in the shipping-and-receiving department of the old Austin Meat Company. That was his first exposure to the butchering business. He and his fellow employees sometimes looked for creative ways to prepare and promote throwaway cuts and table trimmings, one of which was skirt steak. "We broiled some fillets of outside skirt that were pretty good, but they never caught on," he recalls of those experiments. In 1962, Sonny married Guadalupe Guajardo and went to work as the meat-market manager in her parents' popular East Austin neighborhood store, Guajardo's Cash Grocery, formerly at 809 Lydia. Guajardo's offered affordable cuts of meat for its Hispanic clientele and also sold some heads (for barbacoa de cabeza) and honeycomb tripe (for menudo). Sonny continued to tinker with his ideas for skirt steak preparations. Though he has since heard all the anecdotal evidence about skirt steak being prepared and called fajitas in the Rio Grande Valley as far back as the 1930s, Sonny maintains that both the dish and the name originated with him.

"I looked at that cut of meat and said to myself, 'It looks just like a belt,'" he says. "The first fajitas I ever saw, I made myself right here in the 1960s." According to Falcon's version of fajita history, he figured his new creation would popularize an affordable cut of meat and attract more business to the family store – if he could just get people to taste it. "Any time dad would cook fajitas in the back yard, all our friends would ask to come over," recalls son John Falcon. "Dad knew he'd come up with something great."

Sonny approached powerful family matriarch Doña Soledad Guajardo with his idea to promote the market, and the prescient businesswoman gave him her blessing. He cut a deal to set up a concession booth at a weeklong outdoor event, and his fajitas made their commercial debut at the Dies y Seis celebration in Kyle in September of 1969. Though it was a watershed event in overall fajita history, sales of the new dish were hardly an overwhelming success. "We gave away little cards with maps to the store on the back, but I think our biggest night we only made about $17," Falcon ruefully admits. Undeterred, Sonny began to work rodeos, fairs, and outdoor festivals on nights and weekends, hawking fajita tacos to ever more appreciative crowds. He created fajita fanatics from Mercedes to Abilene, everywhere from BorderFest in Laredo to AquaFest in Austin. "The first year we'd work an event, some other food concession would be the top earner," says Sonny with pride. "When we came back the second year, we'd be number one." By the third or fourth year, the other booths were invariably serving fajitas, too. When Fajita Cook-Offs came into vogue, Sonny's tender, tasty beef was a perennial winner, although his competitors piled on the condiments and did everything they could to learn his secrets. Sonny Falcon was so personally identified with the dish by the late 1970s that an Austin reporter christened him "The Fajita King," and the apt moniker stuck. (He now owns the trademark on that term. His request for a trademark on the word "fajita," however, was turned down.)

Sonny Falcon is hardly a one-idea kind of guy. In the mid-Seventies, he founded Diaz & Falcon Food Products with a brother-in-law, anticipating the growing market in prepared foods for Hispanic consumers with conveniently packaged items such as barbacoa de cabeza and chorizo. In 1980, he opened a Fajita King kiosk near the ice-skating rink in Northcross Mall and had a good four-year run there before mall management's taste turned to uniform-clad national fast food chains. After Mrs. Guajardo's death, the various family ventures and properties were divided and sold off, and Sonny got out of the food business for many years.

Sonny Falcon's love for feeding people and his cooking skills never waned, however. He still has connections with the packing houses that sell the best quality skirt steak and his simple, straightforward cooking techniques still turn out a tender, flavorful fajita. "After the presentation he made to the Chamber of Commerce, everybody in town is thrilled he's coming down," says Kyle Mayor James Atkins. The Fajita King restaurant will be in Kyle's new Center Street Village shopping center and is slated to open in late spring. The kitchen will be open and Sonny and John will be manning the grill. The Fajita King is back!