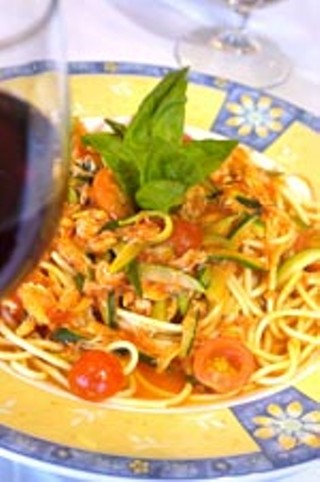 Though I try to approach each new reviewing assignment with as much objectivity as possible, it's difficult not to have high expectations when readers, friends, and colleagues all rave about a new restaurant. By the time I finally dined at Andiamo, I'd heard great things about the far North Austin Italian eatery for months. All the descriptions were so uniformly glowing that when my first experience there was disastrous, I honestly wondered if I'd somehow stumbled into the wrong place. Thinking back on all the raves I'd heard, I realized they all included details about personal attention from the owner himself, Giovanni Cocciante, who was nowhere to be seen during my initial dinner. Now that I've dined at Andiamo with Cocciante in attendance, I realize that dining in the warm glow of his personal attention is a big part of what makes Andiamo special.

A friend who joined me at Andiamo described our evening as a visit to "the land of no." We arrived at an almost empty restaurant early on a Tuesday night, and the host was huffy because we didn't have a reservation. Though there were only two or three tables occupied in the entire dining room, we were seated in a "Siberia" locale: against a wait station next to the kitchen door, resulting in swinging doors, waiter chatter, and rattling cutlery throughout our meal. We tried to order appetizers while still deciding on entrées. No. Could one of us get salad with dressing on the side? No. Would it be possible for me to get a side order of polenta although it wasn't part of the lamb dish I'd chosen? No. The luscious, velvety cauliflower soup could have been the culinary highpoint of my meal, but it arrived in a stone-cold bowl with chips and cracks all around the edges. Oh, no. The first entrées we received were actually for another table and had to be redistributed, at which point our waiter informed me there was no lamb tonight and I'd have to make an alternate choice. He would, however, bring me some polenta with my new selection. We were so totally disaffected by the time our entrées finally arrived, we didn't enjoy the food and left very unsatisfied. I just could not reconcile my dining experience with everything I'd heard. What was I missing?

A subsequent visit to Andiamo answered that nagging question. Giovanni Cocciante was indeed the all-important missing ingredient. Cocciante is a restaurateur of the old school – a gregarious, hands-on operator blessed with an innate sense of hospitality – and with his working the room, Andiamo is a different restaurant altogether. The day we went for lunch, Cocciante stopped at every table more than once, making sure the business lunch crowd (heavy on the IBM pocket-protector brigade) had any and everything they needed. No special requests were denied, no details overlooked. It was like being welcomed into someone's home for lunch. An appreciable difference in the level of hospitality wasn't all I noticed on that second visit. Served in a more welcoming atmosphere, the food was much more enjoyable, too.

We began our lunch with the special soup and salad offerings of the day, an excellent Asparagus Bisque ($3.50) and a colorful Octopus Salad ($3.95) with celery, onions, basil, cherry tomatoes, and black olives in a pleasantly astringent vinaigrette. Next, we split an order of the day's special pasta, lovely homemade Pappardelle ($8.95) dressed in a rustic, fresh ragu flavored with pancetta. From the menu, I chose Gamberi Bocelli ($8.95), shrimp and crabmeat wrapped in wafer-thin slices of prosciutto, bathed in a delicate white wine reduction. Based on the suggestion of a friend at a nearby table, my companion opted for Vitello Rosemarino ($9.95) and was rewarded with fork-tender veal in a light, tangy lemon rosemary sauce. Both entrées were accompanied by fresh carrots and green beans cooked lightly enough so they retained some crispness and crunch. We were impressed with two stars on the dessert menu, both definitively Italian: a voluptuous Vanilla Gelato ($6) and a simple, not overly sweet Ricotta Cheesecake ($6). Our desserts arrived with the offer of complimentary cordial glasses of the Italian liqueurs Amaretto or Sambuca, whichever we'd like. We noticed this offer being made at other nearby tables, too. Cocciante explained he expects to have a beer and wine license in place by the end of March, and he longs for the day he can offer a full wine list. For now, he encourages his customers to bring their own wine for a nominal corkage fee and offers complimentary liqueurs after meals.

My two visits to Andiamo could not have been more different, and I honestly believe the second experience more accurately represents the restaurant. I sincerely hope the first disaster was a very rare anomaly. Before relocating to Austin last year, Giovanni Cocciante operated the award-winning Bellissimo restaurant in Fairfax, Va., where presidents, lawmakers, lobbyists, and international travelers were among his regular clientele. After experiencing Cocciante's natural gift for hospitality, I expect Austin diners will embrace him and help him duplicate his success here in the Texas capital.