Set in a limestone, tile-roofed building at the corner of FM 2222 and Loop 360, Siena resembles one of those rambling manor houses that define the Italian countryside 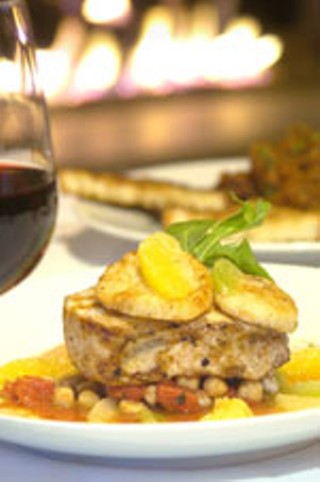 There was a time in Austin's not-too-distant past when new restaurants opened monthly, and booking a table at one of them required an agent. That was in the year 2000, when wallets were still fat with stock market cash, and new millionaires were as plentiful as pimples. In Darwinian fashion, however, only a handful of those restaurants survived the lean years that followed. Siena is one of them, emerging as a favorite among the Loop 360 set. Owner Stan Adams and Executive Chef Harvey Harris exert considerable effort to cultivate its clientele, treating them to appetizers if the food service is uncharacteristically slow, hosting prix-fixe wine dinners, or opening its doors to wedding receptions and parties. Judging from the steady stream of weekend customers, they seem to have succeeded where others have failed. But there might still be room for improvement.

Set in a limestone, tile-roofed building at the corner of FM 2222 and Loop 360, Siena resembles one of those rambling manor houses that define the Italian countryside. Inside, heavy iron chandeliers illuminate the multiple dining spaces. Deep-hued damask draperies, massive wood beams, and enormous fireplaces make the space seem more like the ancient estate of an Italian count than a recently built suburban restaurant. In fact, the ambience of Siena's tony Tuscan interior should feel comfortingly familiar to Austin's west-side elite who are used to living in the cavernous faux Mediterranean villas that surround the lakes. In similar style, its amply proportioned, unpretentious cuisine attracts loyal customers from Austin's swankier side. This is a restaurant of hearty roast meats and homemade pastas, where truffle oil (the liquid smoke of the aughts) is used liberally, where one can sample savory stews of wild boar, and where diners can luxuriate in the glow of a crackling fire. In short, Siena is neighborhood comfort food for those who don't mind dropping $150 on a dinner for two. For the rest of us, Siena is an expensive special treat.

In terms of appetizers, Siena's neo-Tuscan comfort-cooking takes form in delectable stews of wild boar served atop crisp truffle-oil-brushed bruschetta ($12). The slow-cooked meat braised in red wine and herbs mates exquisitely with the earthy truffle-scented bread. Here, the homely sardine finds the spotlight in an appetizer of grilled fresh sardines atop a ragout of herbed chickpeas and tomatoes ($11). Be it a bowl of plump, steamed mussels paddling in an herby orange- and sambuca-tinged broth ($14) or a colossal plate of fried shrimp, squid, scallops, and whitefish surrounded by twin puddles of tomato sauce and red pepper rouille ($11), simplicity and flavor merge in Siena's clean, confident cuisine.

Entrées, too, convey the studied elegance that the restaurant seeks to communicate. With changing specials that reflect the seasons, just about all of the dishes are fresh and appealing. Tender, grilled medallions of beef perched atop buttery sautéed wild mushrooms and garnished with crisp French green beans ($29) embody the flavors of autumn. A special of grilled tuna accompanied by lemon- and herb-marinated chick peas ($26) evokes the late summer flavors of the Mediterranean. Dishes such as a giant veal chop served atop braised cabbage or huge steaks with roasted potatoes are satisfying just about any time of year. Harris and his staff make everything from scratch, whether it is pasta, bread, or the gallons of tomato sauce that the kitchen goes through daily.

It came as a bitter disappointment, then, when I sampled a homemade ravioli with butternut squash and duck confit in a sherry cream sauce. The pasta on my plate glistened in its satiny sauce of demi-glace and sherry. The sauce was delicious, and I imagined the filling to be an earthy mélange of sweet and savory. When I took a bite, however, the predominant flavor in the ravioli was bread, and the texture of the filling unpalatably dry. While I find it tempting to forgive the kitchen this misstep, when charging upward of $20 an entrée, it's difficult to chalk it up to an off night in the kitchen.

Service, too, could be ramped up to match Siena's steep menu prices. Despite two different weekend visits, I was unaware that the kitchen offered dessert specials (beyond the regular tiramisu, panna cotta, and dense chocolate torte offered on the menu) until I spoke to Harris on the phone. And on one occasion I asked for a side dish of extra sauce that never arrived. I believe the generally competent and engaging waitstaff at Siena can do better.

During the past four years, Siena has comfortably established itself as one of the city's favorite fine dining establishments, and for good reason. Whether it can consistently live up to its reputation remains to be seen.