The Contest, the Judges 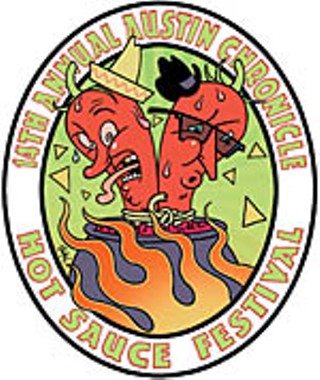 At the heart of the Austin Chronicle Hot Sauce Festival is the contest itself. The blind-tasting competition for individuals and restaurants is conducted by some of the top chefs in the state of Texas. They take hot sauce seriously, and so do most of the people who enter. Several previous winners in the individual category have gone on to start their own hot sauce companies (see Which Came First?). This year's finals judges are:

Executive chef of Fonda San Miguel, Miguel Ravago has been recognized by the James Beard Foundation as one of the Southwest's top chefs. Ravago is the co-author of Comida de la Familia (with Marilyn Tausend), a cookbook that features authentic Mexican family-style cooking.

Chef and co-owner of the highly acclaimed Vespaio restaurant on South Congress, Alan Lazarus has long been considered one of Austin's top toques. His previous Austin restaurants include Basil's and Tortugas. Lazarus also spent several years serving as the executive chef for Whole Foods.

Co-owner of Acenar, San Antonio's hip new modern Tex-Mex restaurant, Bruce Auden is one of the top chefs in Central Texas. Esquire magazine named him one of the best chefs in the country. His restaurant, Biga on the Banks, in San Antonio, is consistently ranked among the top restaurants in the state.

Executive chef at La Mansión del Rio in San Antonio, Scott Cohen is a graduate of the Culinary Institute of America and has apprenticed under such chefs as Wolfgang Puck, Georges Blanc, and Roger Verger. His menu at Las Canarias restaurant showcases ingredients from the fields and farms of South Texas.

Currently the restaurant critic of the Houston Press, Robb Walsh is the former Food editor of The Austin Chronicle and former editor in chief of Chile Pepper magazine. A two-time James Beard Award winner, Robb is also the author of Legends of Texas Barbecue Cookbook and The Tex-Mex Cookbook.

Preliminary judges open, sort, and screen every single bottle of hot sauce entered in the contest. Then they pass the best-qualified entries on to the finals. As you might imagine, this task sometimes involves the unpleasant experience of being the first to eat a salsa that is too hot for human consumption. For their selfless sacrifice, we wish to thank these preliminary judges in advance: