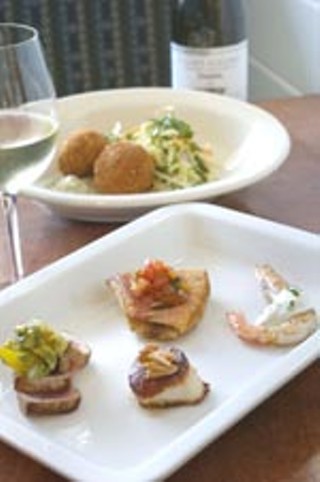 [Ed. note: Due to a printing error, the following review was incomplete in the July 23 issue. It is reprinted here in its entirety.]

It's not often that a service-ready restaurant space with an established clientele and a trendy location becomes available in Austin. But when it did, Will Packwood, the wunderkind chef of the now defunct Emilia's, and his business partner Sam Dickey, veteran of the Granite Cafe, were ready to jump on it. Though they had been planning to build a custom-designed space to house their much-talked-about Italian undertaking Osteria Amerigo, when Lambert's Restaurant went on the market in January, they acted without hesitation.

They developed a new business concept – one that they felt was better suited to the tiny neighborhood storefront on South Congress – and then made some dangerous assumptions. Assumption No. 1 dictates that Austin diners are picky and want more control over their menu choices. An extension of the first assumption, assumption No. 2 implies that when faced with difficult menu choices, people know what to order and how to order. Assumption No. 3 is that people value their ability to micromanage the meal more than they worry about its final price tag.

With these ideas in mind, Packwood and Dickey engineered a seasonally changing seafood menu where everything is a la carte, and fish can be ordered by the ounce. They gave Lambert's a color makeover, bathing the walls and banquettes in rich azure tones that evoke the sun-speckled glint of the Mediterranean on a summer afternoon. Everything else in the building remained basically the same. Within weeks after the restaurant changed hands, 7 unlocked its doors amid attendant chaos at the restaurant's opening party. The tables were too small, the plates were too big, the space too noisy, and the dining room too crowded. Six months later, the ocean swells have subsided, and 7 has settled into a comfortable, rolling routine. It finally seems ready. However, as I witnessed the staff tripping over one another a few weeks ago to placate one chronically dissatisfied customer, I couldn't help wondering, is Austin?

First, let me say that the food at 7 is fantastic. On any given night, the menu might feature scallops the size of hockey pucks, fleshy halibut cheeks, fresh skate wing, or some rare swimmer such as Mediterranean Branzino. 7 offers a variety of wild fish unlikely to be seen anywhere else in Austin. All of it comes to 7 on wings, flown in from far-flung destinations, to arrive in the kitchen before they have barely taken a final, wheezing breath.

The meal at 7 starts as soon as you sit down, with a generous plate of crisp homemade potato chips. It is a startlingly homespun way to open a meal authored by someone whom Food & Wine magazine recently rated as one of the best young chefs in America. But this is a restaurant that embraces its contradictions. It is self-consciously cliquey, as it welcomes you with a wink and nudge and then smugly initiates you with the a la carte menu. It favors simplicity and affordability, then charges $21 for an ostentatious appetizer of brined, poached fois gras, topped with microgreens and cherry compote (it was admittedly delicious). These incongruities might be unforgivable were it not for the fact that the food here is so wonderful.

7's appetizers follow a conventional format. Unlike the a la carte fish items, which arrive on the table practically naked, these are fully conceived. Amply portioned, artfully invented, some appetizers could in fact be consumed in reverse order, as a main course instead of an opener. And why not? It is the customer who purportedly runs the show at 7. The kitchen's Lucky Number 7 ($18.50), a fisherman's dream of a stew, teeming with a small net's worth of seafood, spiced with saffron, rouille, and surrounded by a fan of croutons, is really enough for a main course. And the potato gnocchi, which all but float off the plate ($10.50), tossed with basil pesto, tomatoes, and mozzarella, can out-muscle any fish on the menu.

When ordering fish for the main course, the servers generally encourage the customers to sample a little bit of everything. So, instead of requesting a five- or six-ounce piece of fish, they suggest ordering three or four ounces of several types, each with a different sauce. The kitchen adeptly portions, then sears, grills, or roasts each piece and serves it with a choice of sauces that initially seem insultingly basic. Almond brown butter, cucumber dill crème fraîche, lemon-thyme beurre blanc, for instance can raise an eyebrow or two at their bold simplicity. After all, what are we paying for if not some laboriously reduced demi-glace or cloud-like aerated foam? On the other hand, the pared-down sauces focus complete attention on the fish.

A seared snapper married intuitively with the avocado lime salsa ($4.63/oz.), while the fleshy Florida Goldface Tile found its soul mate with a basic lemon-thyme beurre blanc ($3.11/oz.). Less successful was the Bigeye Tuna accompanied by the green apple barbecue sauce ($4.52/oz.). I anticipated that the tuna would have the meatiness to stand up to the sweet and spicy sauce, but in the end it faded, overpowered by an overly aggressive barbecue sauce. The tuna alone, though, was perfectly prepared.

An unrepentant nibbler, I am well-suited to the sampling strategy proposed at 7 and was thrilled to share several three-ounce samples of fish and two sides with my husband. However, I truly lament not ordering my own six-ounce portion of the vitally prepared skate wing in brown butter, capers, and garlic ($3.42/oz.), when I really just wanted it all for me. The simple seasonal sides we ordered – scalloped potatoes ($5.50), sautéed rapini, and roasted mushrooms and onions ($7.50) – were delicious and ample enough to share between two people, yet seemed both overpriced and underdressed for 7's fashion-conscious microcosm. These are some of the pitfalls inherent in the 7 experience.

In other circumstances, I imagine how the lack of adult supervision during the ordering process could lead to some real culinary cataclysms. The pick-and-choose format of the menu forces diners to go through a series of extreme mental gymnastics, first in order to visualize the size and flavor pairings of the dish and then, disconcertingly, in order to calculate the price of the final bill. While 7's clientele have more ownership in the meal's creation, in fact, the format seems like laziness on the part of the obviously talented kitchen staff. The fish arrive with minimal presentation, sauces come on the side, and the accompanying side dishes clatter precariously about on the tiny tables in the most unwieldy manner. The servers rush around in the miniature space, balancing far too many plates, and bump into each other constantly. And the total cost of six ounces of fish (the standard portion size) plus an a la carte side dish can creep into the high twenties.

This style of restaurant requires extra effort on the part of the servers, who must not only inform their customers about how to order and help them make well-planned pairings, but also end up having to shuttle extra plates to the tables. That staff at 7 is well-trained and generally well-informed, but I did detect some disorganization among the ranks, which may simply be a need for more staff, though I can't imagine how the restaurant could possibly manage another body trying to squeeze among the packed tables.

As 7 starts its newly planned expansion into the neighboring storefront, hopefully some of these logistical issues can be resolved. More challenging for this talented team of chefs may be getting its diners accustomed to the no-frills a la carte concept of a steakhouse, transposed to seafood. There is no question that 7 has potential to be one of the best, most inventive restaurants in the city. The restaurant's ultimate success, however, will depend on how accurate Packwood and Dickey were with their initial assumptions, and how well they can persuade the rest of the city to sacrifice the expected dining spectacle for a trimmed-down production. For my part, I'm sold. 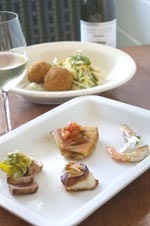 Sea Change
At 7, the customer has much more control, but at what cost?